"Everybody is trading on the inside somehow or another," Rolling Stone reporter Matt Taibbi wrote three years ago. "A lot of sources I talked to suggested that this is endemic to the entire culture. The real issue here is it's everywhere ... And the fear is there's no end to it."

We will never get rid of insider trading, but there's a sign that the FBI's crackdown over the last four years is working.

Here are the average annual returns of equity long/short hedge funds -- those betting on the direction of stocks -- relative to the S&P 500 (SNPINDEX:^GSPC): 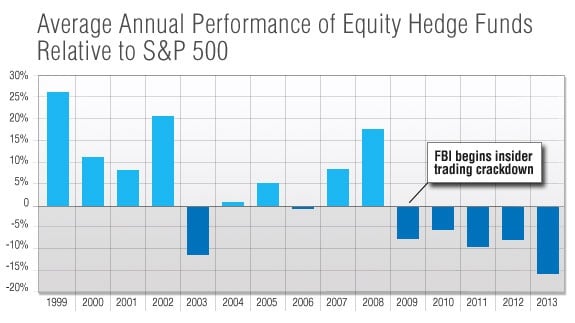 The FBI insider trading crackdown began with the 2009 perp-walked arrest of billionaire Raj Rajaratnam and has led to more than 70 arrests, guilty pleas, and convictions. Hedge funds' performance relative to the broader market has been abysmal ever since.

We can't say for sure whether poor returns and criminal indictments are related. The hedge fund industry has gotten so enormous -- Barry Ritholtz notes that there are more hedge funds in America than Taco Bells -- that competition should limit returns. And money managers have severely underestimated the power of the economic recovery and market rebound.

But, come on. Look at that chart.

Hedge funds used to be able to earn big returns without pushing the limits of the law. They could, say, buy a basket of stocks trading below net working capital, short a basket of stocks trading well above their normal valuations, and expect to do well. It's different today. There's much more competition among those trying to exploit short-term market inefficiencies. Any "edge" you can maintain over the competition is stupendously valuable -- according to Forbes, there are more than 50 hedge fund and private equity billionaires. And as James Surowiecki points out, fewer companies are offering quarterly earnings guidance. That pushes the value of inside information up even more. It's one of the last remaining edges professional investors have.

We know insider trading occurred on a massive scale. According to a study by Measuredmarkets, 41% of U.S. companies receiving a buyout bid in 2006 had suspicious levels trading of activity just before the deals were announced. Another study by two NYU economists showed that the more bankers involved with a merger deal, the more likely suspicious trading is to occur just before the deal is announced. There's also evidence that suspicious trading has declined during the insider trading crackdown. Abnormal trading before buyouts of U.K. companies has fallen by half since 2009, according to the Financial Conduct Authority.

This is what was supposed to happen. It's well known that the IRS goes after celebrity tax evaders to make headlines and scare average folks into following the rules. Arresting Rajaratnam, and last week's criminal indictment of megahedge fund SAC Capital, does the same thing. In a January interview, Pulitzer Prize-winning journalist Ron Suskind told me:

You see, that's how you create a cultural moment. Because everyone left behind, they all say the same thing at the same moment. "Geez, if that happened to me, my mother would be so ashamed of me." That's how you do it. You do it by saying "Guess what? There are consequences here. I don't care how many lawyers you've hired. I don't care how much you're paying Sullivan & Cromwell [a large law firm]. You're going down."

And that's good news for the rest of us. The problem with insider trading goes beyond fairness and creating a level playing field. It's about an industry that attracts the nation's best and brightest minds while not creating new wealth, but siphoning money off of existing wealth thanks to insider tips.

Sorry the game is up, all you brilliant hedge fund managers. But the rest of the economy needs your talents somewhere else.