If you think LinkedIn stock is expensive, think again.

LinkedIn (LNKD.DL) and Facebook (META -2.37%) operate very differently, but they share one undeniably common characteristic: Both businesses will need to further monetize their members to grow into their valuations. On that note, two charts go a long way in helping us compare these social networks' valuations on a per-member basis. 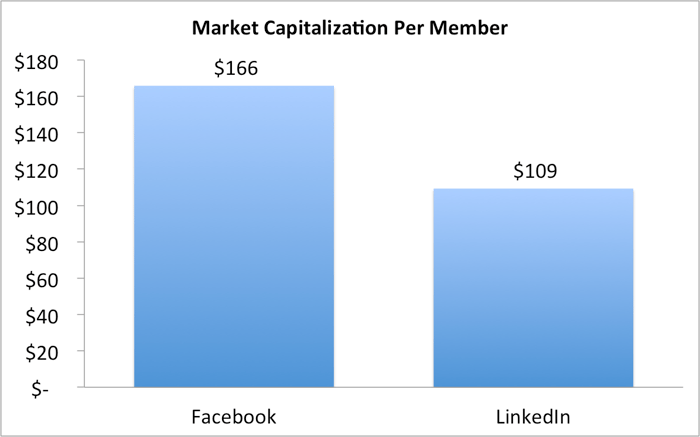 It's impossible to know exactly how much more active Facebook's members are than LinkedIn's, but Facebook certainly has a drastic lead.

But even though LinkedIn's members may not be nearly as active on the website, it has monetized them far better. And monetization, of course, is the name of the game at the end of the day. 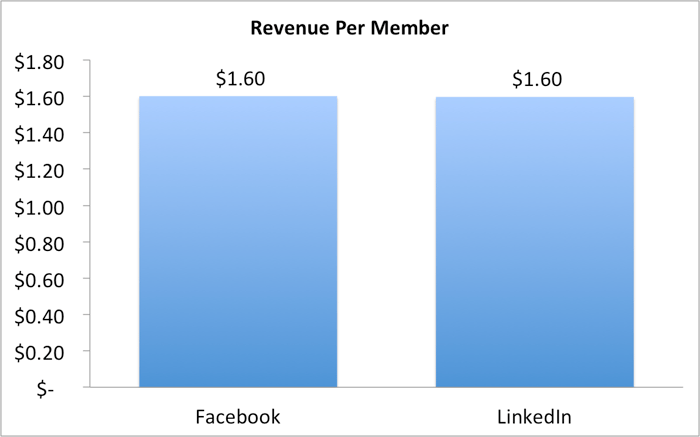 LinkedIn earns exactly as much as Facebook per member, even though LinkedIn's members are not nearly as active. To further define LinkedIn's definition of members, let's go straight to the company's 2012 annual report. Under its risk factors section, LinkedIn advises investors: "a substantial majority of our members do not visit our website on a monthly basis, and a substantial majority of our page views are generated by a minority of our members." Still, LinkedIn earns as much per member as Facebook.

Now add this into the picture: 699 million of Facebook's 1.155 billion monthly active users use the platform on a daily basis. That's a stark difference from LinkedIn's comparatively inactive user base.

Certainly if you were to find LinkedIn's revenue per hour of member usage, LinkedIn would post a number meteorically higher than Facebook.

I'm getting dizzy
In other words, LinkedIn's business model is far better at monetizing members than Facebook, yet Facebook trades at a significantly higher premium per member.

What happens if LinkedIn finds a way to persuade the majority of its members to use its service (as opposed to a minority today) on a monthly basis in the future?

Even more, what happens when LinkedIn nears the 300,000 businesses that CEO Jeff Weiner thinks it can persuade to pay LinkedIn for recruiting solutions? Today, the company is serving only about 20,000 businesses. Meanwhile, its recruiting solutions business is its largest and fastest-growing (69% revenue growth from the year-ago quarter) segment, making Weiner's vision seem realistic.

Something doesn't seem right here. If I'm already bullish on Facebook over the long haul, then this comparison has made me dinosaurish on LinkedIn.

Fool contributor Daniel Sparks has no position in any stocks mentioned. The Motley Fool recommends and owns shares of Facebook and LinkedIn. We Fools don't all hold the same opinions, but we all believe that considering a diverse range of insights makes us better investors. The Motley Fool has a disclosure policy.