Atlantic Power (NYSE:AT) reported earnings last week, blowing away analyst expectations for the second quarter in a row. But the utility's dark past could still haunt its future, and investors need to know whether this dividend stock is truly making a comeback. Here's the latest.

Number crunching
Atlantic Power reported Q2 sales of $139 million and adjusted earnings of $0.02. While there might not have been too much to talk about on the top line, its bottom-line earnings beat expectations by a whopping $0.28.

This marks the second straight quarter that Atlantic's enjoyed big earnings beats. In Q1, the utility pulled in adjusted EPS of $0.05, surpassing predictions by $0.17. But its two most recent quarters stand in stark contrast to an unfortunate tradition of worse-than-expected negative EPS since Q3 2011.

Since 2009, Atlantic Power's TTM revenue has increased 115%, but its bottom line has dropped off an even larger 176%. 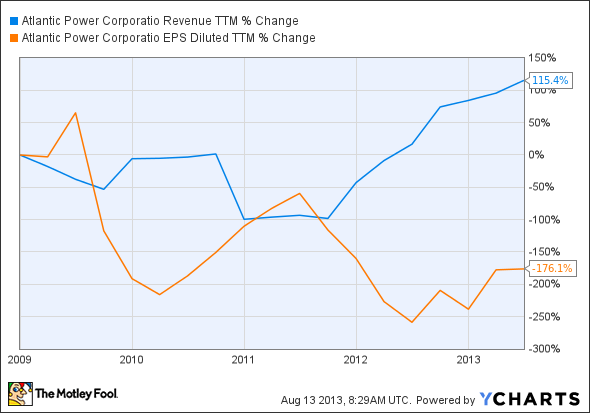 AT Revenue TTM data by YCharts.

Atlantic Power's stock dropped off nearly 25% in the last three months before making a 5% rebound on its positive earnings report. But with its share price down a whopping 70% over the past year, investors need to know if Atlantic's recent rise is the beginning of a real rebound.

How did it get so bad?
There are two reasons Atlantic plummeted as far as it did: (1) greedy dividend investors and (2) eager-to-please management. When the utility announced during Q1 earnings that it would slash its distribution 66%, effectively destroying its 10.2% yield, shares dropped off 30%.

For long-term investors, the move was seen as responsible and necessary for an over-extended company. But Mr. Market punished the company for its fool-hardy finances, and the stock's suffered ever since. Not all dividend cuts have to be bad, either. Exelon (NASDAQ:EXC) also announced a 40% haircut during its Q1 earnings call, but the stock headed higher on news of Exelon's more palatable plans.

Where's Atlantic headed from here?
The difference between Atlantic's drop and Exelon's rise has less to do with the companies' pasts than with their futures. It's for this reason that, despite Atlantic's demise, its stock seems to have leveled out in recent months.

It seems contrary to Atlantic's "growth by acquisition" strategy to be shedding assets, but investors have applauded Atlantic's $208 million sell-off of non-core assets. As electricity demand remains weak, it's becoming increasingly important for utilities to hang on to only their best profit pullers. FirstEnergy (NYSE:FE) is knocking off 10% of its capacity to kick costly coal out of its fleet, while Duke Energy (NYSE:DUK) has cancelled plans (for now) for a new $25 billion nuclear facility.

Both Duke and Atlantic are eyeing natural gas as the fuel of the future, although Atlantic is also adding on a relatively larger helping of renewables to its fleet. Though Atlantic expects to have around $155 million in available cash by the end of 2013, it did lower its expectations regarding the overall value of renewable energy credits at its Georgia biomass-fired power plant.

Even if biomass isn't panning out as predicted, Atlantic expects to capitalize on extended wind production tax credits in the "near term." The utility may have a long way to go to catch up to NextEra Energy's 10,000 net MW of wind energy and sector-defying stock soar, but its strategic decision seems to be putting it on a more sustainable track.

Funny financials
But even with solid plans in place, the company's financials should make pause inquisitive income investors. With its share price plummet, Atlantic's dividend yield is back up to a worrisome 9.6%. Last year's payout ratio clocked in at 100%, and its cash available for distribution is up just 3% year to date compared to the same 2012 period. One of the closest dividends to touch Atlantic's yield is PP&L's (NYSE:PPL) 4.6% annual yield, and this utility has more balanced books and a regulatory backbone diversified across two continents. Although Atlantic expects its full-year 2013 payout ratio to come in around 70%, the utility still seems to be sacrificing acquisition cash for short-term investor satisfaction.

Can Atlantic cut it?
The utility was off to a good start in Q1 with new objectives, but Atlantic's dividend obsession is still no good for long-term investors. In the world of dividend stocks, there are simply better and safer choices to be had.