The grocery store business can be brutal. From every dollar received, a supermarket might only be able to bank two or three pennies as profit. That means that there's little room for error, and small changes can make a huge difference to a company's bottom line.

And yet if investors know what to look for, investing in this part of the food business can be a wise use of their money. Even though profits are tough to come by, people's need for food will only increase for the foreseeable future. And if you know the three most important metrics to watch, you'll know when to buy, and when to sell, your shares of grocery companies.

When you're only squeaking out a few pennies of profit per dollar, using your space efficiently matters. That's why sales per square foot is such an important metric. It not only lets you know how efficiently a store is using its physical space, but over time it also lets you see any noticeable trends.

Let's take a look at how three of the nation's largest grocers -- Kroger (NYSE:KR), Safeway (NYSE: SWY), and SUPERVALU  (NYSE:SVU) -- have fared over the last eight years regarding sales per square foot. 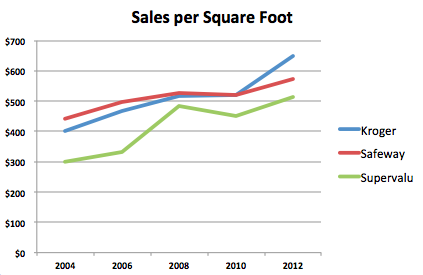 Clearly, all three grocers are headed in the right direction, but two other pieces of information stick out. The first is that SUPERVALU's sales per square foot are significantly lower than Kroger's and Safeway's. The second is that Kroger was the only grocer able to grow this metric from 2008 to 2010 -- during the Great Recession.

Those are important data points, but alone, they don't tell the whole story

Margins matter
As you may have learned by now, profit margins are a big deal. It may not sound like a huge difference, but if a store is able to bank $0.03 of profit for every dollar spent, rather than a penny and a half, its bottom line will double!

Efficiency -- in operations, hiring, and inventory -- is key to making this happen. And if a store is increasing its profit margin, stagnant sales per square foot aren't so bad as they seem. Let's take a look at how our three stores have done here. 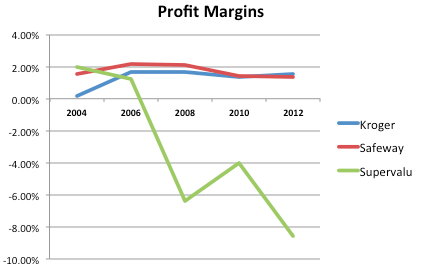 Again, we have two important trends showing up here. First, SUPERVALU started out with the best margins of the bunch but quickly fell off and is now in negative territory. Combined with lower sales per square foot than the competition, this should raise a red flag for investors.

The second trend is that over the last two years, Kroger has slowly but surely been widening its profit margins beyond those of Safeway. So far, it's pretty clear that these two stores seem like better investments, but there's still one number we need to look at.

Comparable store sales
If you only check out a grocery store's revenue numbers, its easy to be misled. If a company is building more and more stores, its pretty easy to grow revenue. But the ability to grow revenue in existing stores is a much better sign of financial strength in the industry. That's why looking at a company's comparable-store sales growth is so important; it filters out the noise of expansion.

Once again, here's how the Big Three grocers have performed: 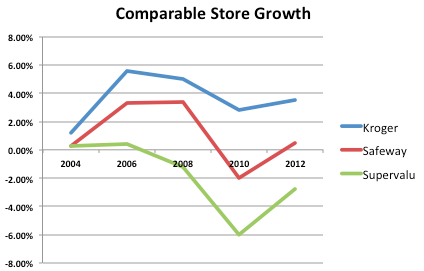 Drawing conclusions
With all three sets of information in mind, its now pretty safe to draw some conclusions. Kroger, though its profit margins have stayed about the same since 2006, has consistently shown strong organic growth in sales without having to rely on building more stores.

SUPERVALU, on the other hand, has been a disaster, watching its sales at existing stores drop for years and actually failing to turn a profit. Some further investigation would show that SUPERVALU had massive expansion plans (via acquisition) that came at the worst time -- during the Great Recession.

And Safeway has remained between the two.

It should be no surprise, then, that investors following these three metrics since 2004 would have been much better off investing in Safeway or Kroger. 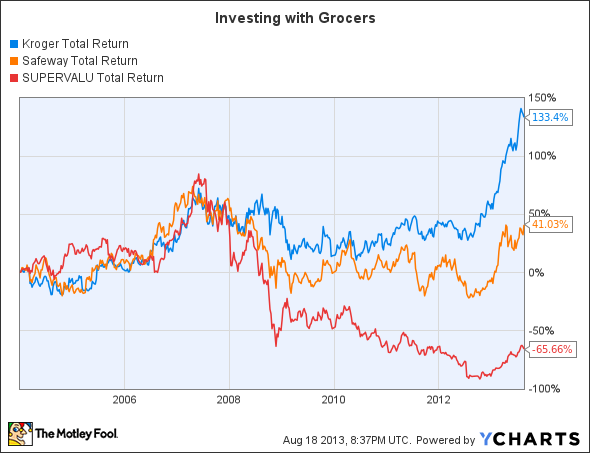