Imagine taking any road trip in the U.S. without spending a dime on gas.

Thanks to Tesla Motors (NASDAQ:TSLA), this reality is just around the corner. And this is the primary reason I think that bears are underestimating Tesla.

A 50% charge in 20 minutes or an 80% charge in 40 minutes (at Tesla's new 120 kW Superchargers), and Model S owners can be on their way. Even more, by the end of this year, Tesla will be taking some stations one step further, giving Model S owners the option to pay about $50-$80 for a 90-second battery swap without even having to get out of the car. 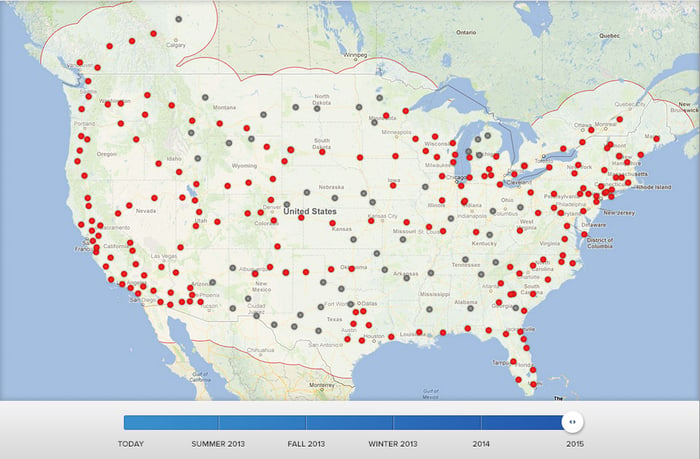 In other words, Tesla's fast-growing Supercharger network currently serves as a meaningful competitive advantage for the company.

Ecosystems matter
When Apple (NASDAQ:AAPL) introduced the iPhone, the company had already built the world's largest digital store. The digital store gave the new iPhone meaning. It gave it context.

Then, with millions of credit cards already on file, Apple was able to introduce the App Store to customers already buying digital products from Apple, further strengthening its ecosystem. Once just a music store, iTunes has now expanded to become the world's largest digital movie and app store too. The digital store reported a whopping $4 billion in revenue last quarter.

Tesla is doing something similar. It's building an ecosystem of Superchargers and service centers. It's building the infrastructure needed to make EVs mainstream -- just on time, in fact, for Tesla's planned Model X launch.

Sure, competition will continue to force the company to step up its game. But investors should realize that Tesla's ambitious goals aren't just fluff. They're backed by aggressive infrastructure expansion.

And Superchargers will not just be a U.S. phenomenon. Already, Tesla has plans to cover 80% of Norway's population with Superchargers. Of course this is just the beginning of Tesla's international Supercharger rollout.

A catalyst for EVs
Sure, Tesla Motors may one day decide that the best move for the company will be to open up its Superchargers to other EVs. After all, their mission is to catalyze the entire EV market.

Though industry-wide access to Tesla's Superchargers would certainly encourage competition, it would also boost further outside investment in EV infrastructure. This, in turn, would strengthen the EV value proposition in general.

In a way, Tesla is hedging its own success in four steps:

Valuing Tesla's Superchargers
Analysts have had a blast playing with the numbers on Tesla's potential vehicle sales, but very few give the company credit for its fast-growing network of Superchargers.

What happens when Tesla Motors launches a $35,000, 200-mile-range, stylish EV in three to four years (as Tesla CEO Elon Musk has expressed to Bloomberg) with a massive network of Superchargers already in place? Likely the beginning of mainstream EV adoption.

Tesla's investment in Superchargers is what makes America's most closely followed growth stock an enduring business and not a high-flying fad.

Apple Has Its Ecosystem, Tesla Has Its Infrastructure @themotleyfool #stocks $TSLA $AAPL Next Article
Current