It's hard to say where and when it started in earnest. Maybe it was the publishing of Rachel Carson's Silent Spring in 1962. Maybe it was the 2004 airing of Supersize Me, Morgan Spurlock's experiment attacking McDonald's (NYSE:MCD). Or maybe it was the documentary Food, which investigated the dark underbelly of industrialized food.

No matter when and where it started, there's no doubt a fundamental shift is occurring in how Americans approach their food. Instead of blindly trusting that the industrial agribusiness model has consumers' best interests at heart, people are starting to make informed decisions about where they get their food.

Those decisions are causing the food industry to take a long, hard look at what the future model for food in America will be. As time goes on, two distinct patterns are taking hold.

The first of these two is the organic movement. Though some argue that organic food has the same nutritional content as conventionally produced fare, there is little doubt that a move toward organically produced food is a safer, more sustainable, and environmentally friendly model than that used by big agribusiness.

And if sales figures say anything, it's that Americans are willing to pay more for these benefits.

And yet, there's still a lot of room for growth: Organic purchases accounted for only 4% of food sales in 2010.

Becoming locavores
The second major movement of this paradigm shift is that of buying locally grown, in-season food. Because of the enormous carbon footprint associated with packaging and transporting goods from faraway lands, consumers are eating stuff that's made in their own backyard.

Another reason for the popularity of the local food movement is that some industrialized food producers are, in the words of John Ikerd of the University of Missouri, "able to meet the USDA organic certification requirements without adopting the organic philosophy." Buying locally and getting to know one's farmer assures the consumer of the integrity of farming practices used.

Farmers markets are one of the most popular channels for people to buy local. 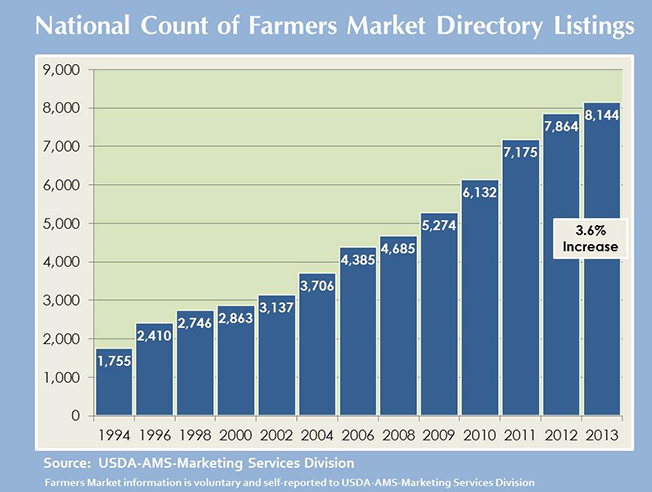 Between 1994 and today, the number of registered farmers markets has increased by 8% per year. And even though the past year showed much slower growth, this number doesn't represent the number of vendors attending specific farmers markets, which can increase dramatically over time.

Another popular method of consuming local food is via Community Supported Agriculture (CSAs). In this arrangement, people pay an up-front fee to a local farmer for a portion of the year's harvest. Though the size of the harvest may vary, food is usually dropped off at a designated location on a weekly basis. Some CSAs even have work-share agreements, allowing people to pay reduced prices in return for working on the farm.

It's very difficult to pin down how many CSAs are in the United States. According to one source, there were as few as 50 in 1990, and Local Harvest estimates that there are at least 4,000 in existence today, representing 21% growth per year over the last quarter-century.

What this means for investors
Taken to the extreme, this could mean the end of investing in food companies altogether as it would be the independent, local farmer providing the vast majority of food for consumption. But the fact of the matter is that this extreme is nowhere in our immediate future.

Instead, it's important to identify companies that demonstrate a deep understanding for what these movements mean beyond surface-level posturing and use of buzzwords.

Whole Foods (NASDAQ:WFM) would be the poster child for what the new food economy could look like. The company is way ahead of the curve when it comes to identifying the eco-friendliness of its products -- especially its seafood -- and it was the first major grocer to require products with GMOs to be labeled as such.

Starbucks (NASDAQ:SBUX) also earns high marks for showing how to grow an international brand without exploiting the supply chain. Under CEO Howard Schultz's leadership, the company has developed the Coffee and Farming Equity (C.A.F.E.) practices aimed at getting coffee from producers who practice earth-friendly techniques.

Earlier this year, the company also purchased a 240-hectare farm in Costa Rica to serve as an international center and testing ground for improving and expanding C.A.F.E. These types of moves are especially important as "locavores" may already be concerned that all coffee consumed in the United States is shipped long distances before arriving in their respective cups.

Finally, Chipotle (NYSE:CMG) offers a stark contrast to its former parent company, McDonald's. While some have criticized the burrito maker for trying to oversimplify the process of ethically sourcing its meat products, its "Food with Integrity" program was the first of its kind when introduced in 2001.

The program aims to only buy antibiotic-free pork raised outside, naturally raised cattle beef, cheese and sour cream from rBGH-free cows, and antibiotic-free chicken. The program gives preference to buying from organic, family-owned local farms. Chipotle also scored big points earlier this year when it disclosed on its website types of food it sells that contain GMOs.

If you're looking to invest in any company associated with food, investigate how it is addressing the organic and local food movement. This crucial and underappreciated viewpoint could lead to much better returns than simply looking at a company's balance sheet.