If you think Elon Musk and Tesla Motors (NASDAQ:TSLA) invented the electric car, you're off by about 180 years. Ideas can take a long time to take off, and eyeing the "crazies" of today can give investors valuable insights into the corporate cash cows of tomorrow. Here are three crazy ideas that our kids won't believe we ever lived without.

Scottish inventor Robert Anderson may have invented the world's first "electric carriage" in 1832, but his non-rechargeable primary cells doomed his idea from the start . Even today, battery technology remains in relative infancy , with Tesla Motors attempting to avoid the recharge issue altogether via fast-paced battery swaps . But maybe what Tesla really needs in rechargeable roads.

Earlier this month, South Korea unveiled a 12 kilometer route that powers public buses via electromagnetic fields buried in the pavement , according to a BBC report. The strips push power through at 85% efficiency , removing the need for recharge stops and cutting down on the need for big batteries . Two buses are currently cruising on the new system, with 10 more expected by 2015 .

Tesla's a long way off from installing its own electric tarmac, but its infrastructure investments to date have already proven that the company produces more than just cars. Its 18 complimentary "super-charger" stations are doubling to 27 stations by the end of this summer, and will blanket 98% of the U.S. by 2015 . 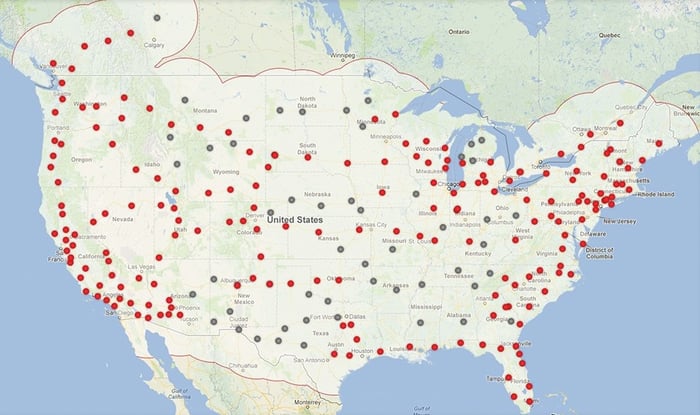 2. Sleeping behind the wheel

If you're in a Google (NASDAQ:GOOGL) car, driving to work could be the perfect opportunity for a power nap. The company has quietly been ramping up its driverless technology, and recently received a regulatory thumbs up from the National Highway Traffic Safety Administration (NHTSA) to expand tests on "vehicle-to-vehicle communications systems ." The search engine company has already logged around 500,000 miles  on its driverless fleet, and the NHTSA estimates that basic vehicle-to-vehicle communication technology could cut back on as much as 80% of all accidents involving non-impaired drivers .

Google's got its hands in plenty of projects, and its 10-K doesn't even mention driverless cars . But it's this ceaseless creativity that has helped Google continue to innovate. Its R&D spending has risen 143% to $6.8 billion in the last five years , and its foray into driverless cars is helping its brand today – and perhaps its books tomorrow.

Unlike rechargeable roads, the beginnings of the vehicle-to-vehicle technology revolution are already around us. If you drive a new luxury car, chances are it beeps (annoyingly and impressively) if you accidentally ease out of your lane. General Motors (NYSE:GM) is running its own experiments with new "Super Cruise" technology that would work as an auto-pilot mode on open highways , according to Bloomberg.

According to GM, bits of this technology has already improved the safety standards of its 2013 Caddies through their "Driver Assist Package." Sensors provide 360 degrees of crash risk detection that, if Google is any evidence, may someday soon provide crash avoidance, as well. 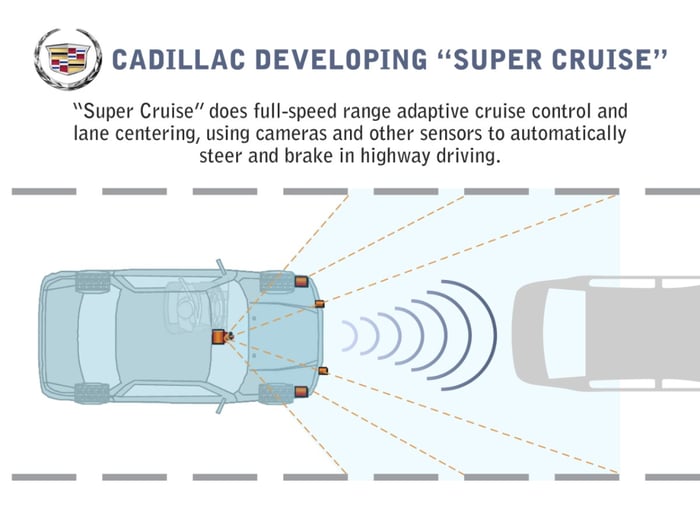 3. A new type of sunroof

Electric or not, almost every vehicle around still relies on some external energy source to get it from point A to point B. Leave it to Dutch university students to create the world's first "energy positive car,"  a solar-powered sedan that produces almost twice as much energy as it produces.

Unveiled a month ago, "Stella" seats four and can travel 250 miles on a rainy day, and up to 420 miles when its solar panels are soaking up sunshine . And although the car's custom build cost a pretty penny, mass production seems surprisingly feasible given the $4,000 price tag for Stella's solar panels .

Life in the future fast lane

Sooner than we think, we may be cruising hands-free down Route 66, recharging from the road on a rainy day or speeding along with solar when the sun's out. Not long ago, we would've scoffed at the idea of Tesla Motors' innovation or Google's automated autos, but these ideas now garner more excitement than unease. The transportation sector continues to amaze, and these crazy ideas may just be the next steps to move us in ways we never could've imagined.