Tesla Motors (NASDAQ:TSLA) is one of this year's hottest stocks, with shares up more than 400% year to date. And the electric-car maker's stock shows no signs of stalling, despite mounting challenges for Tesla in the world's largest auto market. The California-based company began accepting reservations for its all-electric Model S sedan in China this week. However, a Chinese businessman who's claiming rights to the Tesla name is now threatening Tesla's entry into the Asian country.

Flatter me not
Imitation may be the sincerest form of flattery, but for foreign companies operating in China it often means tens of millions in settlement fees. China is notorious for its so-called trademark trolls -- people like Zhan Baosheng, who is blatantly using Tesla Motors' logo and brand identity in China. Trademark disputes in China often result in years of legal battles.

Last year, Apple (NASDAQ:AAPL) was forced to pay $60 million to a Chinese company that claimed it had legal rights to the iPad brand. In Tesla's case, Zhan says he registered the Tesla trademark seven years ago. He even controls the Tesla Motors domain in China, which prominently displays a knockoff Tesla Motors logo: 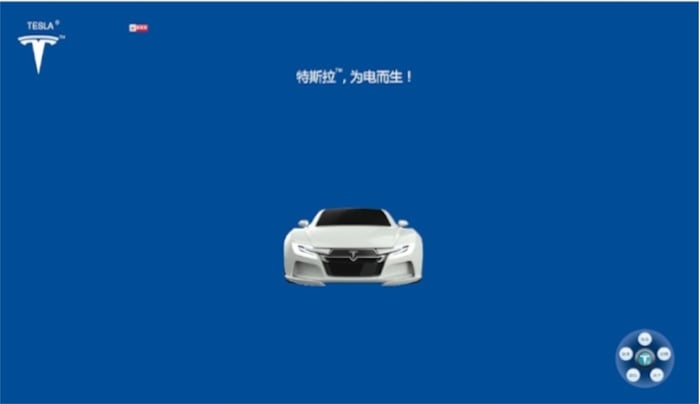 While Apple finally coughed up enough cash to settle its trademark problems in China, Tesla may not be as easily strong-armed. The company's CEO, Elon Musk, has a reputation for fighting back. Earlier this year, Musk publicly accused New York Times columnist John M. Broder of writing an unreasonable and factually inaccurate review of Tesla's Model S. The outspoken CEO is also going after auto-dealer associations that are standing in the way of letting Tesla sell its cars directly to consumers in certain states.

Musk isn't shy about defending his company. Therefore, I find it hard to imagine a scenario in which Tesla would willingly dish out millions of dollars to use the brand and logo it designed. Nevertheless, this is certainly a setback for Tesla at a critical time for the company. As the world's largest auto market, China is a key step in Tesla's strategy for becoming a mass-market EV seller.

Moreover, as Musk recently said of China: "It's the world's biggest market for premium sedans. If you take something like, say the Mercedes S-class, they sell approximately half of all their worldwide production in China."

This market is obviously important to Tesla's future, which is why I suspect the EV maker and its inventive CEO are already suiting up for battle.