Earnings season has almost come to a close, but there are still a few companies left to report. One of those companies is The Fresh Market (NASDAQ: TFM), a grocer with 131 stores in 25 states that focuses on high-end customers by providing a "farmer's market feel" with several specialty goods. The grocer will be reporting earnings on Wednesday, after the market closes.

Following are the bare bones of what the market is expecting from The Fresh Market, but read further to find out what three metrics investors should keep their eye on to really see if this grocery store is worth your investment dollars.

Because grocers often only bank a penny or two of profit for every dollar spent in-store, even small changes in one's profit margin can mean big things for a company's bottom line. If we look at how The Fresh Market has performed during the second quarter of the past three years, we see a solid move toward more profitability. 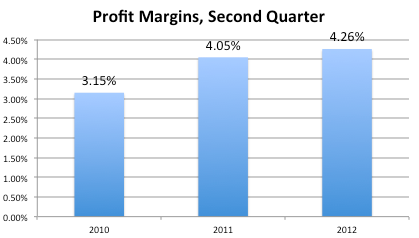 It should be noted that the dramatic increase between 2010 and 2011 was partially due to my having to estimate what income taxes would have been paid during 2010. At the time, The Fresh Market was treated as an entity in which shareholders paid taxes, and the company did not.

Either way, the improvement of 21 basis points was a positive step for the company, especially given its lofty valuation. Given expectations, Wall Street is expecting these margins to expand beyond 4.30%. If The Fresh Market is able to come in ahead of these expectations, it would be a very good sign.

Sales per square foot
Because the grocery business has such tough economics, efficiency is key. Profit margins tell part of the story, but by monitoring sales per square foot, you can get a better idea of how the physical space is being used. This is especially important for The Fresh Market, as its stores average just 21,000 square feet -- far below that of traditional grocery stores.

Last year during the second quarter, The Fresh Market had $127 worth of sales per square foot, or SSF. To see whether the company is keeping up with larger trends, let's look at how some peers performed over the last quarter. Whole Foods (NASDAQ:WFM), Fairway (NASDAQ: FWM), and Sprouts Farmer's Market (NASDAQ:SFM) all represent newer-age grocery stores that, like The Fresh Market, focus on fresh, locally sourced, and organic goods.

Obviously, these stats show a great variance in SSF. Whole Foods is a much bigger, nationwide competitor, while Sprouts is focused in the American Southwest, and Fairway is limited to the Northeast.

The Fresh Market operates in 25 states right now, so it's somewhere between these two extremes. I would say that if The Fresh Market could show a 5% increase in SSF -- or about $133 -- that would be a solid sign for investors.

Comparable-store sales
The one major problem with SSF is that new stores that open during the middle of a quarter are counted, even though they might not have been operating for the full quarter. That was the case for Fairway, which was the only store of our group showing a negative trend.

Because The Fresh Market definitely fits in the "growth" category for grocery stores, there may be no more important indicator than growth in same-store sales, which tells you whether the value The Fresh Market offers is catching on with consumers.

Again, let's look at how The Fresh Market's peer group has fared this past quarter to get some perspective.