The memory industry is known for being in constant transition. We have seen many memory cycles since Dr. Fujio Masuoka invented the NOR & NAND types of memory for Toshiba in 1980. The market has also changed its memory preferences.

To give an example, in the mid-90s, DRAM technology was the most popular memory format. By 1995, fifteen companies were developing DRAM technology, attracted by the possible high returns that fast-growing, insatiable demand for memory could bring to the table.

Strong competition led to a price war. After 10 years of intense competition, only four companies -- Micron, Samsung, Infineon and Elpida -- managed to stay in the DRAM segment.

Competition remains fierce. The demand for memory has shifted to NAND flash memories, although DRAM is still important for PCs. And only the NAND market is said to be worth more than $30 billion, according to IC Insights.

Who has the upper hand? 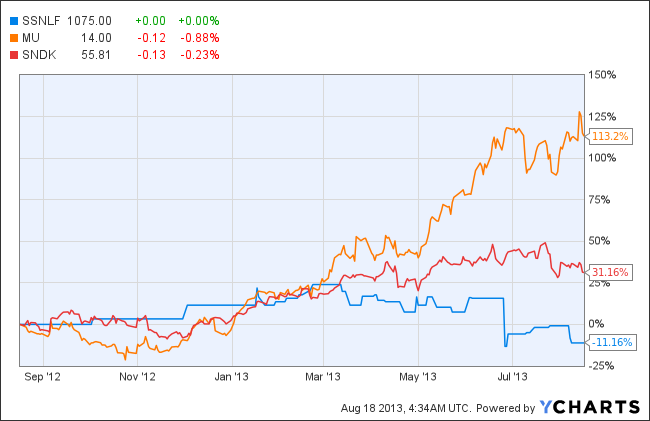 The current market
Nowadays NAND flash memory is the primary data-storage medium for most electronic devices, from tablets to digital cameras.

DRAM technology is still important in the PC world, but the price war has caused margins in this segment to look not so attractive. DRAM prices plunged to a record low in 2011as the price of the benchmark DDR3 2-gigabit DRAM declined 85%. This caused Japanese Elpida Memory to file for bankruptcy in 2012

It's also important to understand that the current technological paradigm in the industry could change any moment. As former Micron CEO Steve Appleton mentioned in 2004, to survive in this volatile environment, you have to remain highly competitive, keep an efficient manufacturing model, sustain strong financial position, and develop advanced technology.

To decide which memory company has the best competitive advantages, let's look at how they stack up based on the requirements given by Appleton. Below are three examples worth watching.

Micron Technology: Acquisition of Elipda set to increase strategic advantages
Micron Technology (NASDAQ:MU) just finished the acquisition process of Japanese Elpida Memory , and this will make the supply of DRAM technology even more condensed, with Micron's presence fortified after owning a 300mm DRAM fab in Hiroshima, 65% ownership interest in Rexchip and 100% of the capacity of their 300mm DRAM fab in Taiwan . Micro will become the world's second largest memory manufacturer, only behind Samsung (NASDAQOTH: SSNLF).

But there's more about Micron than just size and economies of scale. It has a well-diversified portfolio of memory products, from DRAM to NAND flash memories and NOR flash technologies. This helps to decrease sales volatility.

Micron is the industry leader in the DRAM & NAND field, enjoying a very efficient cost structure. A strong demand for both of its DRAM and NAND products helped to mark a 12 % sequential increase in the third quarter revenues of 2013, released on mid-June.

Finally, although the DRAM industry is shifting from PCs to higher growth segments like mobile, servers, and automation, Micron seems to be comfortable with the change. The company experienced record shipments (especially in the server business) in these areas, which suggests they are well-prepared for the new changes the industry will face in the next decade.

SanDisk: 11% revenue increase on a year-over-year basis
Like Micron, SanDisk (NASDAQ: SNDK) has also benefited from the improvement in the memory market dynamics. Its stock price has increased an amazing 31% in the past 12 months.

This has taken the stock price to $55 per share, but for Joshua Kim (Artha Capital Management), this may be just the beginning.

The company is trading at 19 times earnings. If you take into account the net/cash share of $5 billion that SanDisk has accumulated, the real P/E could lie between 10-14, well below the 16 times industry average. Also, the company has a safe royalty stream of ~$400 million per year (growing at about 5-10% per year). Therefore, according to Kim, SanDisk deserves a higher multiple.

Even better, SanDisk has the highest revenue (roughly 20%) from SSDs (solid-state drive), which is the fastest-growing/highest-margin segment in the whole industry, as SSDs are rapidly replacing HDD (hard disk drives) for consumer notebooks.

The first quarter earnings confirms SanDisk's strength. The company beat the consensus with revenues of $1.34 billion, an 11% increase on a year-over-year basis.

The enormous amount of cash Samsung receives for its components gives the company enough resources to be constantly innovating, making it a tough competitor.

An example is the investment in NAND chips. A huge demand for NAND chips (as many as 300 million) is in the making, as ultrabooks move from solid state drives to SSDs and NAND chips.

However, producing enormous amounts of NAND chips requires installing large wafer fab facilities, which are expensive and take at least two years to build and equip.  Well, Samsung just spent $7 billion building one of those plants in China, which suggest they will be the first ones to benefit from an acceleration in demand for NAND chips.

Final foolish thoughts
Although Samsung has more financial resources than SanDisk and Micron to invest in top technology, both SanDisk and Micron have been able to survive all these years in such a volatile industry thanks to the management commitment to keep a solid financial support and a culture of constant innovation.

In the case of SanDisk, as much as 25% of its current market capitalization is backed up by cash and short term investments . Micron, on the other hand, will soon become the world's second largest memory manufacturer and will have access to the mobile DRAM space, thanks to the acquisition of Elpida.

These two companies are well prepared for fierce competition. The good news is that the memory market dynamics seems to be improving, and this is likely to benefit all three competitors. Therefore, adding some exposure to the memory market this year sounds very attractive.