Investors love stocks that consistently beat the Street without getting ahead of their fundamentals and risking a meltdown. The best stocks offer sustainable market-beating gains, with robust and improving financial metrics that support strong price growth. Does Coach (NYSE:TPR) fit the bill? Let's take a look at what its recent results tell us about its potential for future gains.

What we're looking for
The graphs you're about to see tell Coach's story, and we'll be grading the quality of that story in several ways:

What the numbers tell you
Now, let's take a look at Coach's key statistics: 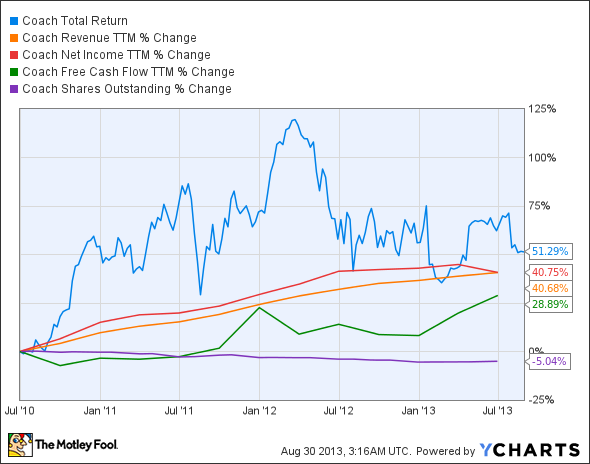 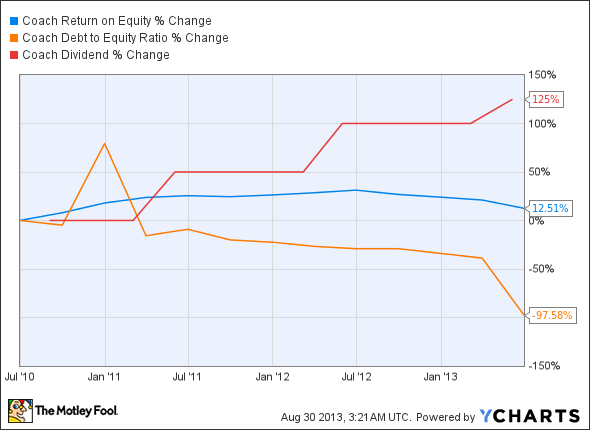 How we got here and where we're going
Coach puts together a really strong performance today, missing out on a perfect score only because its net income grew faster than free cash flow during our tracked period. However, Coach's free cash flow remains slightly higher than its net income on a nominal basis. Coach has a good chance to gain a perfect score the next time we look at it, but it'll have to keep making similar progress in the year to come. Let's dig a little deeper to see if Coach can keep up the pace.

Coach reported modest revenue growth in its latest quarter, but same-store sales fell by nearly 2% in the North American market, which is a big red flag for future gains should it persist into the second half. Fool contributor Rich Smith notes that Coach is losing its market share in the handbags segment, which grew more than 15% in the quarter across all industry players despite Coach's decline. In addition, creative director Reed Krakoff's imminent exit could be challenging for Coach, since the company must rebrand itself to compete with upstart Michael Kors (NYSE:CPRI).

Coach has been facing strong competition in the North American market since smaller retailers like Michael Kors and Tory Burch have been clambering for the same slice of the consumer pie. Coach and Kors are both going after new opportunities in international markets, particularly in big-spending Asian population centers. Coach's Chinese sales were up 35%, with year-over-year same-store sales up by double digits in the region, and Japan accounts for more than 50% of Coach's total international revenues. On the other hand, Kors' non-American and European sales spiked by 96% over a similar time frame, with a gain of roughly 25% in same-store sales.

Fool contributor JP Bennett notes that Coach can continue to leverage its online sales platform, which has produced consistent double-digit growth over the past few quarters. The company also has plans to open 30 new stores in China by the end of this year, which will certainly boost international revenue above its current 34% share of Coach's total sales.

Putting the pieces together
Today, Coach has many of the qualities that make up a great stock, but no stock is truly perfect. Digging deeper can help you uncover the answers you need to make a great buy -- or to stay away from a stock that's going nowhere.