Facebook (NASDAQ:FB) hit another all-time high yesterday amid its continued bullish run-up since the company posted blowout second quarter results. With the stock reaching new highs, it's a great time to re-evaluate the stock's prospects. As it turns out, Facebook stock looks as fairly valued as ever -- but it might be a buy anyway.

Explosive growth changes the picture
About a year ago, Fool technology bureau chief Evan Niu called out Barron's on its shallow claim that Facebook was worth just $15 per share. Trading around $20 at the time -- down significantly from its IPO price of $38 -- the claim was a bit extreme. Now, with shares above $40, the claim looks downright ludicrous.

Barron's biggest mistake was in comparing Facebook to mature tech companies Apple and Google. "Facebook is a much younger business, and its financials are but a small fraction of what the iPhone maker or search giant can boast, so stacking them up next to each other in valuation isn't particularly useful," Evan explained.

Though Evan correctly assumed Facebook had potential for high growth rates going forward, very few could have guessed the extent of these growth rates. Even he wasn't sure if the stock was a buy at a $20 valuation. Investors wondered whether or not Facebook could actually monetize mobile in the first place. 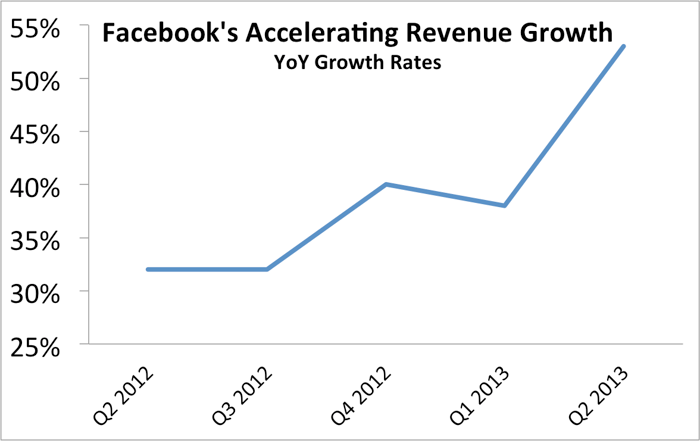 Price matters, new concerns arise
Today, there's a new concern: How long can Facebook keep up its stunning growth rates, and how fast will they taper off? This concern is distinctly different from the uncertainty investors faced one year ago. Back then, Facebook had to prove to investors it can execute. Today, Facebook has proven it can exceed expectations.

With far less business uncertainty, the street has reacted swiftly. Given today's information, Facebook would undoubtedly be a buy at $20 -- but the stock isn't trading at $20, it's trading at more than twice its valuation of yesteryear. At these prices, the stock is arguably a hold.

Facebook has proven it can monetize mobile, and the company's valuation more than reflects this major growth driver. Today, investors are focused on new drivers.

Sure, these new growth drivers could surprise investors just like mobile monetization surprised investors over the last 12 months. And that's likely what investors will need for today's valuation to provide meaningful returns over the long term. But that's just a possibility.

So, congratulations to the shareholders that held from lows below $20 to today's high above $40. The underlying business progress is certainly deserving of the run-up. But this run-up has unfortunately made buying Facebook stock, once again, a difficult decision.

The key difference
But here is where investing gets interesting. Here is where traders and Foolish investors part ways.

Even though Facebook seems fairly valued today -- just like it did to many investors when mobile monetization was nothing but a wishful uncertainty -- today Facebook has proven itself. Zuckerberg and Co. have shown they possess the skill necessary to add business value, and add it quickly.

For this reason, even though the stock is fairly valued, it may be worth considering buying Facebook stock in small quantities simply because the management team has shown it can execute. The company already boasted enduring characteristics given its powerful network effect. Now it boasts execution, too.

Sure, valuation matters, and that's why I say "in small quantities." But a fairly valued, excellent business with proven a management team sounds like a stock an investor could buy and happily hold for decades, giving management an opportunity to provide some upside surprise.