Sanofi will pay an upfront payment of $5 million, which Unilife expects to receive within the next two months. From this deal, Unilife expects $5 million to $15 million in sales milestone payments, as well as royalties on future syringe sales.

In the first four years of the deal, Sanofi will purchase an undisclosed "high volume" minimum amount of syringes from Unilife. After those four years, which Unilife refers to as a "ramp-up" period, Sanofi will be required to purchase 150 million more syringes annually to retain marketing exclusivity.

A road paved with lofty promises
Using a $0.70 per syringe price as a cost basis, Jefferies & Co. analyst Raj Denhoy estimated that the deal would generate $105 million in additional revenue for Unilife after the first four years -- a huge jump for a company that only generated $2.7 million in fiscal 2013 revenue.

The deal with Sanofi could ideally increase the size of the company exponentially once those four years are over. However, Unilife's unwillingness to disclose Sanofi's orders for the first four years of its new deal keeps investors in the dark regarding its revenue growth rate.

This is the second time Sanofi has helped Unilife -- the first time being a $40 million multi-year deal signed in 2008 for the exclusive right to purchase Unifill, which expires in June 2014.

Unilife had also attracted bullish interest in June, when the company signed a 15-year contract with Biodel to administer its novel glucagon rescue drug for severe hypoglycemia through its EZMix platform. Although Unilife expects the agreement to eventually generate $110 million in annual sales, the drug is still a long way from approval with Biodel possibly filing an new drug application, or NDA, in 2015.

How does Unilife's fundamentals stack up?
Considering that these two deals are the only two collaborations supporting Unilife's stock right now, we need to analyze a snapshot of the company's financial situation. 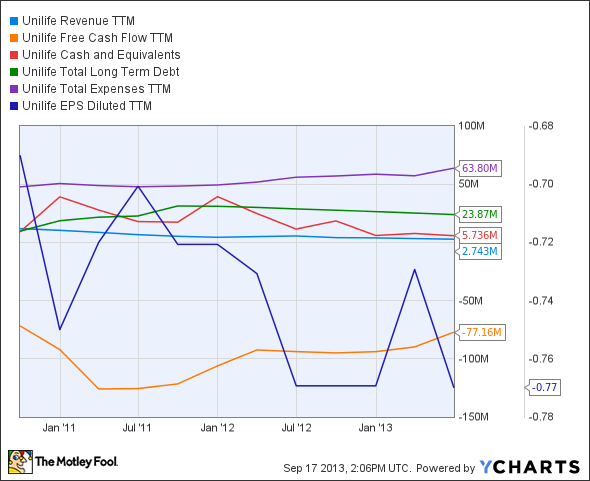 It's not hard to see why Unilife is still unprofitable -- its measly $2.7 million in 2013 revenue was burned straight through by its high long-term debt, rising expenses, negative cash flow, and dwindling cash reserves.

With past negative sales growth, deeply negative margins, a higher debt load, and an unstable P/S ratio, there aren't any convincing fundamental reasons to own Unilife. Unilife's net losses of $63.2 million in fiscal 2013 represent a 20% dip deeper into unprofitability.

Could Antares become a disruptive threat?
More importantly, Antares is a disruptive threat to Unilife because it specializes in needle-free injectors that use high pressure to push medicine through tiny openings in the skin. If these needleless injectors ever catch on, traditional syringes -- which Unilife produces a lot of -- could become obsolete. Unilife CEO Alan Shortall brushes aside those concerns, however, claiming that his company's wearable injectors will eventually become a "billion dollar franchise." 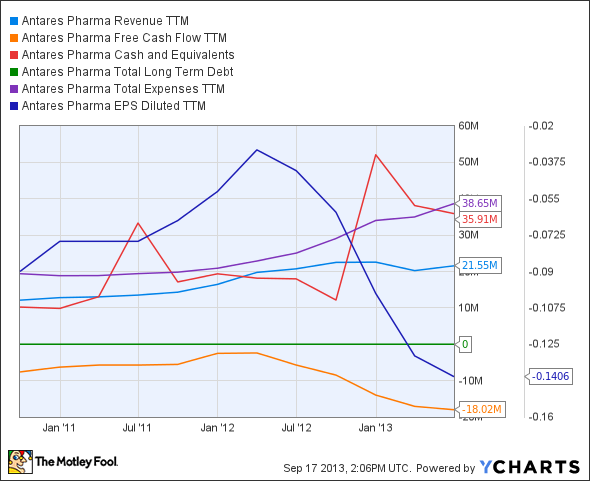 Antares' financials look slightly better than Unilife's, but they're still not pretty. Its expenses are outpacing its revenue, its free cash flow is drying up, and its negative margins are keeping the company deeply unprofitable.

Would it be Foolish to trust Unilife?
Investing in Unilife comes down to one thing -- trust. If you believe that the company's deals with Biodel and Sanofi will progress without a hitch, then this company's stock is grossly undervalued at current prices.

However, a recent Forbes article has raised serious concerns about the company after Talbot Smith, an ex-employee of Unilife, filed a whistleblower lawsuit against his former employer alleging fraud and SEC violations. Smith also claims that Unilife falsified and excluded certain overhead expenses to boost its margins.

Investors should watch this case very closely to determine if Unilife can be trusted. If Unilife is found guilty, this company could fall apart like a house of cards as its collaborative partners head for the hills.

Would It Be Foolish to Trust Unilife? @themotleyfool #stocks $SNY $ATRS $UNIS $ALBO Next Article
Current