Daniel Ferry
(TMFCatoMinor)
Author Bio
Daniel Ferry is a logistics nerd with a transportation planning background who focuses on transportation and advanced manufacturing companies. When he's not writing about trains, planes, and such, he enjoys learning and thinking about the business behind his favorite things: music, media, and good food and drink.

There's been a lot of media attention around the 787 Dreamliner, a technologically advanced passenger jet designed and built by Boeing (NYSE:BA). On the positive side, the Dreamliner has made history as the fastest-selling jet ever, thanks to an innovative design that allows the Dreamliner to also claim the title of the world's most fuel-efficient airliner. On the other hand, since the aircraft launched in 2011, Dreamliners have been plagued with malfunctions, sometimes in very headline-worthy ways, such as by catching fire. One fact that's largely slipped under the radar is that it costs Boeing more money to build a Dreamliner than the company sells them for, meaning that, so far, the aerospace giant has lost billions building and selling Dreamliners. When Boeing released its third-quarter earnings Wednesday, the company provided some clues that the Dreamliner program could be profitable at last, and sooner than expected.

How Boeing counts costs
When Boeing creates a new airline design, the costs are heavily front-loaded while the benefits accrue toward the end of the design's commercial lifetime. Modern jetliners are arguably the most technically demanding machines built in the world, and
developing them isn't cheap. Boeing spends more than $3 billion every year in research and development alone, but it also costs Boeing quite a bit to set up the facilities to actually manufacture the planes. Boeing also has to undergo a learning curve as it begins production of a new plane design, refining the manufacturing process, working out problems, and gaining efficiency as it gains experience. That means that the first plane built is a lot more expensive to make than the hundredth plane, which in turn is more expensive than the thousandth.

Boeing can't charge several times more for the first plane it sells, however, because airlines would simply delay their orders until costs went down. Add the fact that early customers are typically rewarded with steep discounts from the list price in return for supporting the launch of a new plane, and Boeing can actually lose tens of millions of dollars for each plane that it sells early in the aircraft design's life cycle. However, once Boeing has already made investments in its production capacity and the new aircraft's kinks have been ironed out, it can manufacture the planes for far less than it sells them, allowing the later components in a production block to more than earn back the cost of creating earlier planes.

Accordingly, Boeing employs a rare bookkeeping practice called program accounting. Under program accounting, the company doesn't look at the financials of building a single plane, but the financial picture of an entire block of plane deliveries in a program. Boeing estimates a program block's total costs and revenues, taking into account anticipated future cost reductions and future sales prices, and then averages out the program's expected profit margin for each plane. Essentially, program accounting allows Boeing to pull expected profits forward onto its books by pushing early costs out into the future, an accounting measure called "deferred production" that enables booking a small profit from plane sales that were actually losses for the company on an individual basis. Later on, once a program becomes established and production cost savings are realized, the big profits from selling mature planes go to pay back this deferred production. 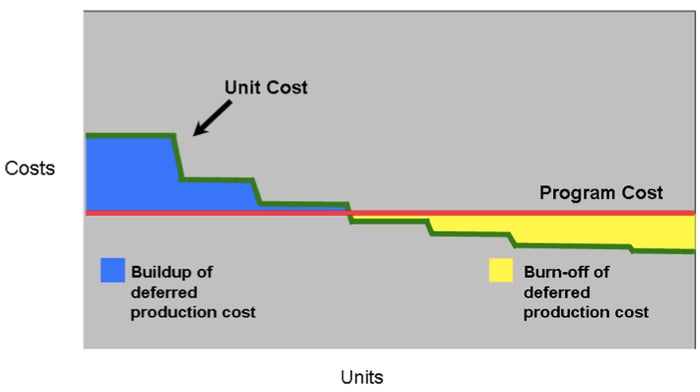 Is the Dreamliner turning a corner?
While new 787 Dreamliner sales haven't been recorded as losses on an accounting basis, each plane sold does cost Boeing millions in cash flow, requiring the company to burn cash from other revenue sources to keep the program afloat until it can support itself. Boeing investors are looking forward to that inflection point where each new plane sold brings in enough profit to begin to pay back deferred production costs, rather than digging the company deeper into the hole. During Boeing's third-quarter earnings call, company execs gave investors some good news and some bad.

First, the good. Boeing confirmed that plans to increase production of the Dreamliner from seven planes per month today to 10 per month were on track, and also announced plans to raise production rates even further, to 12 planes per month in 2016 and 14 per month by the end of this decade. Boeing believes that faster production clip will allow 787 sales to start breaking even in 2015, turning the corner and beginning to earn a profit and pay off deferred production in 2016. That's a much sooner turning point than I expected, and implies that incremental Dreamliner sales will turn profitable after only about 500-600 deliveries. Since Boeing estimated the global demand for Dreamliners at more than 1,700 planes over the next 20 years, that leaves the program a lot of room to bring in bumper profits.

Now, the bad. Boeing raised the total estimated cost of deferred production by 25%, from $20 billion to $25 billion, meaning that the company is going to have to spend another $5 billion before it starts actually making any money from the already expensive Dreamliner project. These are additional costs that few outside Boeing expected. The use of program accounting allows Boeing to be very vague on the financial details of a program so long as the entire program is in the black, but requires more specifics if the program is expected to take a loss. Boeing can avoid projecting a loss by simply inflating the number of planes in an accounting block, adding more profitable planes on the back end to compensate for higher costs on the front end. That's exactly what it did, adding 200 planes to the accounting block for a new total of 1,300. These are planes that, as a group, will be sold at profit margins close to or at zero, in the "very low single digits," according to CFO Greg Smith.

How you look at these numbers will affect whether Boeing looks like a good investment today or not. According to Boeing, the additional $5 billion in deferred production is a good thing, a sign that the company is investing heavily in production capacity ramp-up that will allow it to build and sell more Dreamliners more affordably, bringing that tantalizing turning point ever closer. On the other hand, this story will hold only if Boeing can deliver on its promises. The company has struggled with execution before: The first deliveries of 787 Dreamliners to customers were more than three years late, a delay that cost both Boeing and its airline clients dearly. According to the Seattle Times, the 787 development project itself experienced shocking cost overruns, rising from an expected $5.8 billion to more than $15 billion. If this new $5 billion expense for the Dreamliner program doesn't materialize as investment in real productive capacity, it simply will be another unfortunate cost overrun that pushes the day the Dreamliner will be profitable further out into the future.

Will the 787 Dreamliner Be Profitable at Last for Boeing? @themotleyfool #stocks $BA Next Article
Current