When you're on, you're on. Just ask Big Papi. Or Incyte (NASDAQ:INCY), which specializes in developing novel Janus kinase inhibitors -- simply called JAK inhibitors -- for cancer and inflammatory diseases. Pipeline progress achieved in the last several months by Incyte and partners Novartis (NYSE:NVS) and Eli Lilly (NYSE:LLY) has been the driving force behind share gains and expectations for the small molecule drug class, which could challenge the world's most successful biologic therapies. 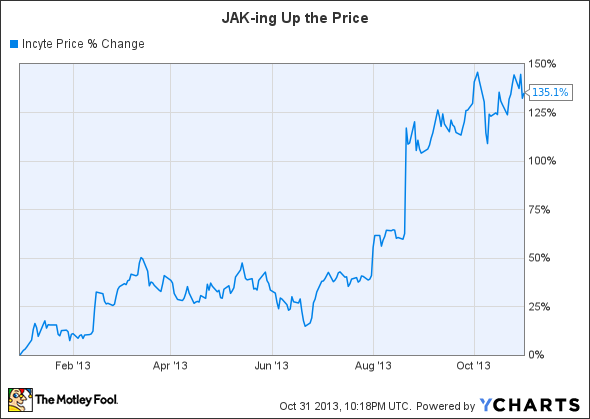 Aside from Incyte's impressive pipeline (discussed below), the company co-markets Jakafi/Jakavi for myelofibrosis with Novartis. The product is growing annual sales at a 56% clip, being investigated for expanded indications, and allowing the company to build its cash pile while investing heavily in its pipeline. I'll point readers to the company's press release for the full onslaught of financial numbers, but here are the important metrics for investors:

A rapidly growing Jakafi represents an enormous advantage for Incyte compared to other developmental companies that suffer through years of losses as they attempt to develop product candidates. The company has achieved a nearly $6 billion market cap from the vast potential of its pipeline. Where does it stand at the end of October?

Oncology developments
Let's start from the top. Incyte and Novartis are evaluating Jakafi in at least four separate trials, including two phase 3 trials, Response and Relief, for polycythemia vera. Results are expected in early 2014 and mid-2014, respectively, which would allow the company to file a supplemental new drug application with the Food and Drug Administration in the first half of next year. That's good news, but it gets even better.

Sanofi (NASDAQ:SNY) recently halted development of its own JAK2 inhibitor, fedratinib, as a single agent in polycythemia vera. The company isn't giving up on the compound, though, and will now attempt to develop a combinational therapy. Nonetheless, Incyte and Novartis now lead the race for developing a JAK inhibitor for this indication.

Jakafi is also being studied as a combinational therapy with Roche's Xeloda for pancreatic cancer and Eli Lilly's Gemzar for various solid tumor types. Incyte is also studying three additional molecules -- all in phase 2 development -- for various other cancer types. Depending on outcomes, I think the argument could be made that the potential of the company's oncology pipeline alone supports the current market cap. That's scary considering the multibillion-dollar potential of anti-inflammatory treatments being developed both independently and with Eli Lilly.

Inflammation developments
Unlike Incyte's oncology portfolio, there are no approved inflammatory products to brag about. There is still plenty of potential waiting to be uncovered with Eli Lilly, however. The most advanced drug candidate, baricitinib, is being studied in a phase 3 trial for treating rheumatoid arthritis. Additionally, two phase 2 trials for psoriasis and diabetic nephropathy are expected to yield results in 2014 and 2015, respectively.

It's important for the drug to impress because it won't be the first JAK inhibitor on the market for anti-inflammatory indications. That distinction goes to Pfizer's (NYSE:PFE) Xeljanz, which is approved for rheumatoid arthritis. While sales have been quite slow to start its commercial life, the long-term potential of an oral treatment is incredible.

If Incyte and Lilly can gain approval and successfully market baricitinib, they would easily be sitting on a blockbuster. The question is, "Can the pair out-compete incumbent biologic treatments and Xeljanz?" That storyline will take a few years to develop, but I'll bet they can add value to the industry nonetheless.

A long-term winner
Shares didn't erupt after earnings were announced, but that's likely because they've been on an absolute tear since August. Essentially, the market has already factored much of Incyte's recent pipeline progress into shares, but that doesn't mean they can't go higher. I am still a big believer in the company's long term potential and still think the company represents a great buy-and-hold investment opportunity at current prices.