When Wal-Mart (NYSE:WMT), the world's largest retailer, does things, it does things big—it has to. On the solar front, the company has more than 11,000 rooftops around the world just waiting to make electricity. That's good news for SolarCity (NASDAQ:SCTY.DL) and provides a positive outlook for solar panel makers suffering from falling prices.

A big player
Companies often tout their environmental street cred, but the truth is sometimes less impressive than the hype. Wal-Mart is one company putting its money where its mouth is. The giant retailer, for example, has installed over 200 solar projects in the United States that generate nearly 90 megawatts of power.

Those stats put Wal-Mart well ahead of other companies, like Walgreens (NASDAQ:WBA) with around 155 installations and Costco (NASDAQ:COST) with nearly 50 megawatts of power. Each is number two on those respective measures according to the Solar Energy Industries Association (SEIA).

The most impressive thing about Wal-Mart, however, isn't how big its solar initiative is today, but how big it could be in the future. According to the SEIA, only 5% of Wal-Mart's U.S. facilities have solar installed. That makes SolarCity's relationship with the giant retailer an important long-term opportunity.

The owner/installer
SolarCity is involved in around 170 of the 200+ solar installations on Wal-Mart rooftops. And the best part is that the relationship between the two companies is typical of how SolarCity does business. The solar installer takes all of the headache out of getting a system up and running by handling all the paperwork and construction.

And in the case of Wal-Mart, there's huge potential to grow alongside one of the retail industry's biggest players. Not only does that provide bragging rights, but it gives SolarCity a reliable, long-term income stream to help fund its growth. The company is losing money as it builds out its systems across the nation's rooftops, but as long as the regulatory environment remains favorable, the company's business outlook is solid.

Panel pains
One area that hasn't benefited as much from solar's growth is the solar panel makers. Although demand has continued to increase, solar prices have fallen. For example, Canadian Solar (NASDAQ:CSIQ), the best performer of the quartet in the graph below, saw its average selling price fall from $4.23 per watt in 2008 to $0.77 per watt in 2012. 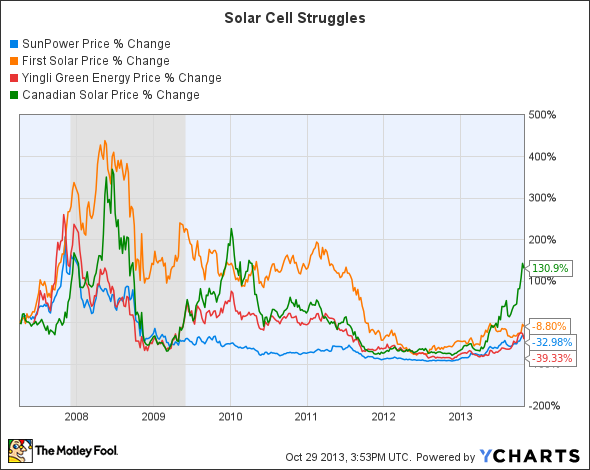 That helps explain the divergent share price trend. However, the company has been bleeding red ink. And, despite having Canada in its name, it manufactures the vast majority of its products in China. Still, the market appears fond of the company's vertically integrated business model, global presence, and book of business.

A new utility
If the prospect of solar is enticing to you, Wal-Mart is a great company but just another solar power customer. The panel markers, meanwhile, are still struggling with a rapidly changing market. SolarCity, though losing money, probably has the most appeal as it builds what could end up being a new and powerful utility model.

Is Wal-Mart one of our "9 Rock-Solid Dividend Stocks"?