Melco Crown (NASDAQ:MLCO) continues to be a shining star in Macau, outperforming much more experienced rivals Las Vegas Sands (NYSE:LVS) and Wynn Resorts (NASDAQ:WYNN). Last quarter, Melco Crown didn't have a new resort or casino to rely on for growth; it did so organically by taking market share.

The result was a 24% increase in revenue to $1.25 billion and 39% jump in EBITDA to $315.2 million. Long term, the company has managed to grow far more quickly than rivals, which have resulted in better returns on the stock market as well. 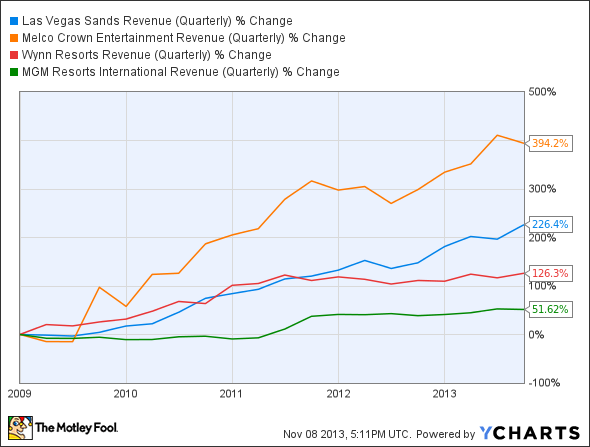 Outperforming on Cotai
Melco Crown has a built-in advantage being on Cotai, where there's now a critical mass. Las Vegas Sands has built three casinos that along with City of Dreams and Galaxy's resort are becoming the entertainment center of Macau. What's impressive is that City of Dreams is outperforming its other long-standing neighbor, The Venetian Macau, and isn't losing share with Sands Cotai Central next door.

Not only is Melco Crown benefiting from the trends toward Cotai, it's building two new resorts that will drive its future growth.

The next step for Melco Crown
For Melco Crown to live up to its lofty stock price the company has to keep the pedal to the metal on growth. Right now, it's building Studio City on Cotai, Tower 5 at Studio City, and is partnering on a resort in The Philippines.

Studio City will open around the same time as Las Vegas Sands' The Parisian and ahead of Wynn Resorts' Cotai project. These will drive even more mass market to Macau and should lift operations of each operator. But Melco Crown still hasn't been awarded gaming tables for Studio City, meaning the risk for the resort is high.

Foolish bottom line
Melco Crown's City of Dreams has clearly taken share from both Las Vegas Sands and Wynn Resorts in an impressive run on Cotai. The question is: Is it a value for investors?

Melco Crown's enterprise value is 15.7 times its EBITDA over the past 12 months, higher than a 14.1 ratio at Las Vegas Sands or an 11.6 ratio for Wynn Resorts. The company will have to continue to perform well and execute flawlessly to live up to its stock price. It's been a long run higher for Melco Crown's stock, but that means there's further to fall if the company can't live up to expectations. So far, so good on that front.