Last weekend, BlizzCon, the annual convention held by Activision Blizzard's (NASDAQ: ATVI) Blizzard Entertainment to promote its core franchises -- Warcraft, Starcraft, and Diablo -- took place. Let's take a look at some of the main projects mentioned during this year's BlizzCon, and how they could affect the future of Blizzard and the gaming industry.

The expansion, which raises the level cap for gamers from 90 to 100, adds a new world, new character models, and a garrison system that allows players to construct strongholds filled with non-player characters -- or NPCs -- to do their bidding. It also allows former World of Warcraft players to instantly upgrade a single character to level 90 as an added incentive to return to the game. 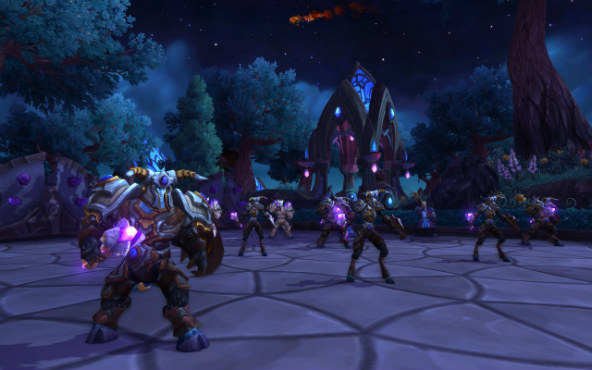 World of Warcraft is one of Activision Blizzard's two biggest franchises, with the other being its first-person shooter Call of Duty. World of Warcraft was initially released in 2004, and hit peak subscribers of 12 million by late 2010. However, users have steadily declined since then, as seen in the following chart. 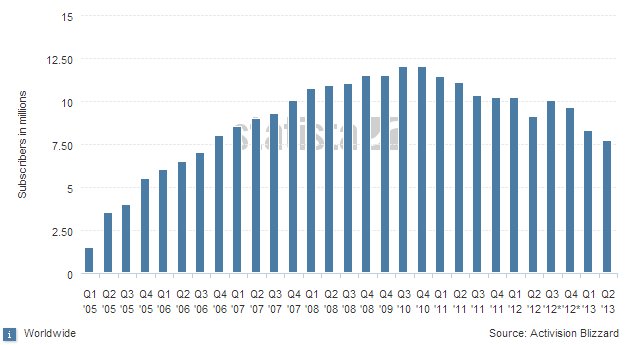 The game's first two expansions, The Burning Crusade (2007) and Wrath of the Lich King (2008), helped propel its user base toward its peak in 2010. However, the third and fourth expansions, Cataclysm (2010) and Mists of Pandaria (2012), only generated temporary boosts in users -- indicating that the franchise was being dragged down by the law of diminishing returns.

In June 2011, in an effort to deal with slowing user growth, Blizzard made World of Warcraft free-to-play up to level 20 to attract new users. Yet, just like the boost granted by its expansion packs, it worked briefly, but did little to reverse the downward trend in total subscribers.

Therefore, there has been speculation that Blizzard might make World of Warcraft completely free to play, and adopt an in-game transaction business model that many other MMOs currently use. However, Blizzard directly debunked this rumor, stating that it didn't plan to abandon its current business model of monthly subscriptions.

The burned down Diablo auction house leaves behind some interesting questions
Speaking of in-game transactions, Blizzard admitted during BlizzCon that the maligned auction house feature of its dungeon-crawling RPG, Diablo 3, was a major mistake.

The auction house feature allowed gamers to sell their in-game loot to other players for real-world money, but distorted the game's balance by allowing gamers to simply purchase rare items rather than spend hours searching for them. 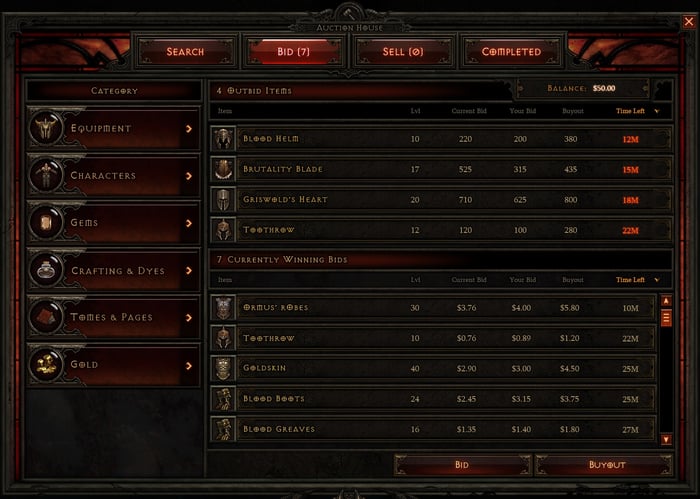 It also required the game to be constantly connected to the Internet to function -- which bothered some gamers since the game had both single and multi-player modes. Two months ago, the auction house was shut down, and Blizzard promised to improve loot drops for a more natural and cohesive gaming experience.

Although the auction house was a controversial feature, it's understandable why Blizzard attempted it. After all, much of the online gaming industry has been headed toward a "pay to win" business model for years.

Is "Pay to Win" corrupting the online gaming industry?
Social media games such as Zynga's (NASDAQ:ZNGA) Farmville 2 and King's Candy Crush are prime examples of "paying to win" -- gamers can simply buy bonuses with real money to outperform their friends.

In World of Warcraft, Brock Pierce, a former child star, made millions by hiring Chinese gamers to "farm" the game for virtual currency, which was then sold back to overseas gamers for real money. Although Pierce's business model eventually imploded, the idea of using cheap labor to generate revenue from in-game money stuck. In 2011, Forbes published an article that revealed that prison labor in China consisted of grinding for virtual gold in 12-hour shifts.

It's encouraging that Blizzard is trying to steer clear of this business model by keeping World of Warcraft subscription-based and eliminating the Diablo 3 auction house.

Blizzard unleashes Heroes of the Storm
Another major announcement during BlizzCon was the upcoming release of Heroes of the Storm, a "hero brawler" multiplayer online battle arena -- or MOBA -- game, which is intended to compete against Riot Games' League of Legends and Valve's Defense of the Ancients 2 -- or DOTA 2.

MOBA games are descended from traditional real-time strategy -- or RTS -- games like Warcraft and Starcraft, but are different in that players only control a single "hero unit," and there is no emphasis on strategic unit construction through buildings like town halls or barracks.

Source: Vg247.com Heroes of the Storm.

Both League of Legends and DOTA 2 have massive user bases.

League of Legends is now the most popular eSport game in South Korea -- a title formerly held by Blizzard's Starcraft franchise -- and is also reportedly the most popular online game in the world in terms of total hours played.

DOTA 2 is also catching on quickly in North America and Europe. Ironically, the original DOTA started out as a user-created mod for Blizzard's RTS Warcraft 3, but Valve eventually registered the trademark to the franchise.

The great strength that Heroes of the Storm boasts is its lore. Just as Nintendo (OTC:NTDOY) mixed up all of its most popular characters in its hit fighting franchise Super Smash Bros., Blizzard is bringing in all of its top characters -- such as Arthas from Warcraft and Kerrigan from Starcraft -- into the mix for an online battle royale.

Other projects to look forward to
In addition to these major announcements, Blizzard also discussed Hearthstone, a free-to-play online card game that will be released for iOS and Android devices. It's an interesting move for Activision Blizzard, which has mostly stayed away from mobile games -- unlike its rival, Electronic Arts (NASDAQ:EA), which has made mobile games a core part of its business strategy.

Another interesting revelation was that a Warcraft movie was in the works -- which was described by the Visual Effects Supervisor, Bill Westenhofer, as "Avatar meets Game of Thrones." In my opinion, this probably won't end well, since movie adaptations of video games usually combine the worst aspects of both worlds -- paper-thin plots enhanced by an overload of CGI effects.

Last but not least, an expansion for Diablo 3, Reaper of Souls, is coming soon, and fans are wildly speculating about the status of Project Titan, an MMO that is rumored to be Blizzard's eventual successor to World of Warcraft.

Thanks for reading, and stay tuned for further updates about Blizzard's upcoming games and projects!