Every quarter, large money-managers have to disclose what they've bought and sold via "13F" filings. While Fools don't always follow what the big money does, we can often glean an idea or two by tracing their footsteps.

OK, if it's Berkshire Hathaway's (NYSE:BRK.A) (NYSE:BRK.B) Warren Buffet we're talking about, it's probably incredibly tempting for many investors to follow his lead. With that said, it's still best to use the limited information found in 13Fs as a starting point to find great investments. What can we learn this quarter?

Buffett believes in big oil -- but not all big oil?
ExxonMobil
(NYSE:XOM) has been the biggest story from Berkshire's latest 13F, and Foolish contributor Robert Baillieul described so well last week exactly why. Simply put, there aren't many companies (and even fewer large enough for Berkshire to make a sizable investment in) that are so effective at turning every dollar it deploys into more dollars. This chart shows exactly how well Exxonmobil does it -- and how much better it is than the rest of the industry: 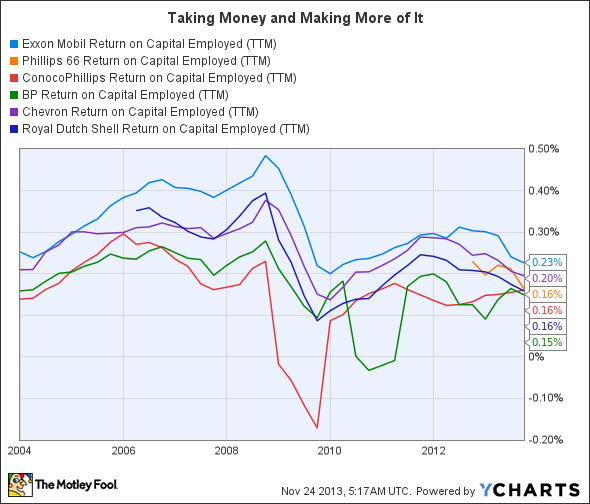 But it's not just the best-of-the-best in energy for Buffett, as Berkshire Hathaway also has a sizable stake in Phillips 66 (NYSE:PSX). Its holding of more than 27 million shares worth more than $1.5 billion, which is the result of both last year's spinoff of Phillips 66 from parent ConocoPhillips (NYSE:COP) -- in which Buffett took a large stake back in 2008 -- and an additional stake taken by one of Berkshire's other investment managers (Ted Weschler and Todd Combs) around the same time.

But don't misread the headlines and miss out on the story
Much has been made of Berkshire's massive investment in ExxonMobil this past quarter and the sale of a large chunk of ConocoPhillips, as if Buffett were just tossing ConocoPhillips out and replacing it with the larger ExxonMobil. This isn't exactly the case. Consider the following:

This tells me that Buffett still has a lot of faith in the business he bought back in 2008, or you could bet that Berkshire investors wouldn't have $2.5 billion in equity in them as of Sept. 30.

So what is there to love?
In two words: global demand. Even as domestic demand for oil has declined, the growth of developing nations in South America and Asia -- and their energy-hungry middle-class populations -- points toward significant future demand for cheap energy: 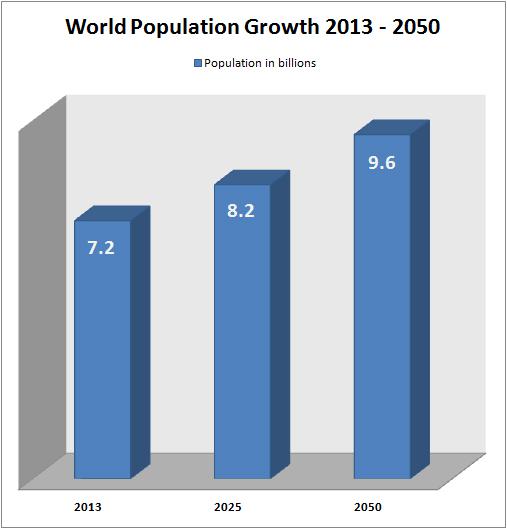 In a nutshell, a growing world will depend even more on companies to find, produce, and deliver cheap energy. But there's more:

As you can see, oil and natural gas will continue to be a big part of that cheap energy source, even as renewables grow. A billion new people will need a lot of energy. Which is why ConocoPhillips and spinoff Phillips 66, along with Exxonmobil, make up more than 6% of Berkshire's stock holdings.

Phillips 66 is one of North America's largest midstream players, operating more than 18,000 miles of pipeline and more than 8,000 rail cars to move crude oil and natural gas to refineries and then to market. Add in the fact that the company processed 62% of domestic crude oil in 2012 and owns 15 refineries that can process a combined 2.2 million barrels of oil per day, and you can see what Buffett likes about this dominant player in the business of processing oil and moving it to market.

ConocoPhillips is the world's largest independent exploration and production company, working in more than 30 companies to find and produce oil and natural gas. Exploration and production is historically a more risk-heavy business than midstream and downstream, directly affected by the volatility of crude-oil and gas prices. Add in the geopolitical factors that can affect such a large company that focuses on exploration, and it's easier to understand why Buffett may have downsized Berkshire's stake in the company.

Final thoughts
Buffett once said, "Someone is sitting in the shade today because someone planted a tree a long time ago." This metaphor is particularly apt, as the world's population and demand for energy will only grow larger in the coming decades.

Blindly buying or selling just because a great money-manager did it isn't a very Foolish way to build wealth. Applying a balanced approach, researching the companies, and seeing how -- and if -- they fit in your portfolio is a better way to go.

Who knows? You might find that ConocoPhillips is one you should buy, even if Buffett decided to sell. After all, Berkshire still has that billion-dollar stake.