Please ensure Javascript is enabled for purposes of website accessibility
Log In Help Join The Motley Fool
Free Article Join Over 1 Million Premium Members And Get More In-Depth Stock Guidance and Research
By Brandy Betz – Nov 26, 2013 at 8:40AM

Macy's will use Apple technology to offer location-based deals. Is this the future of shopping - or another Google Wallet?

The iBeacon technology has earned comparisons to near field communication, or NFC, which was once heralded as the next big thing in mobile payments. Google (GOOGL 3.13%) and AT&T (NYSE: T) are among the companies that bet big on NFC. But those mobile payments haven't taken off the way many predicted -- and iBeacon isn't meant as a direct competitor.

What's the future for iBeacon -- and what companies most stand to benefit? 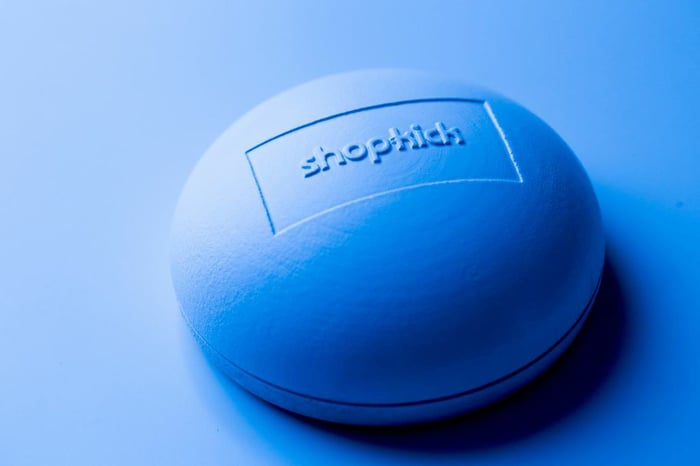 How does iBeacon target shoppers?

Apple's iBeacon comes packed with the new iOS 7 upgrade and works using the device's Bluetooth Low Energy, or BLE, technology. BLE has a range of about 150 feet but differs from traditional Bluetooth in that it uses a lot less energy. Meaning, utilizing iBeacon won't create a major drain on the device's battery.

Shopkick built the shopBeacons using the iBeacon technology. Shoppers who download Shopkick's app and opt in will have a phone that interacts with the in-store beacons as soon as they're within range. The shopBeacon will turn on the app and start sending location-specific offers, such as products on sale or loyalty point rewards.

How do the companies benefit?

Macy's agreed to the shopBeacon trial run because the company can collect consumer information and push loyalty-inspiring promotions while leaving all of the work to Shopkick. The developer benefits from selling its shopBeacons for $40 apiece and from the press attention that could inspire future deals.

But what about Apple?

AllThingsD recently reported on Apple's around $360 million acquisition of 3D sensor company PrimeSense.The buy could help several of Apple's projects. But PrimeSense sensors currently appear in Shopperception devices that track customer behavior in stores to give retailers more real-time shopping data and provide customers with pertinent deals. So it's possible that Apple plans to use PrimeSense tech in a similar way to combine with iBeacon and perhaps circumvent Shopkick's proprietary system.

Is iBeacon an NFC killer?

BLE is often clumped together with NFC because they can seem to serve similar purposes. Both can interact with a customer's smartphone to enhance the shopping experience. LE and iBeacon are mostly used for shopping deals at this point whereas NFC is used for mobile checkout. But the NFC and LE are really entirely different technologies -- meant to work in different ways -- that could prove compatible in future projects.

NFC provides shorter bursts of information at a closer range. That's why it's the preferred tech for mobile payments -- so that the customer has to actually stand at the register to use the system. Customers trying to pay for a pair of shoes while still in the menswear department isn't going to prove practical from either a customer service or payment security standpoint. So NFC makes more sense than BLE in that regard.

Could iBeacon work into a payment system of some sort later down the line? Paypal's rolling out a service -- appropriately called Beacon -- that plans to bring mobile payments to the iBeacon.  But the path might prove difficult since NFC payments haven't become the popular time-saver that many predicted.

Bloomberg ran a story this past summer detailing how NFC mobile payment system Google Wallet is losing money. Google had spent upwards of $300 million buying start-up technologies to develop the app. And the app had fewer than 10 million downloads after being available for two years. As Bloomberg noted, Google's interest in Wallet rests more on the ability to collect customer data for targeted advertising since the payments come with high transaction rates.

And there's also a system in the works by retailers including Wal-Mart and Target.

So the problem with NFC payments isn't in the actual NFC technology, but in the mobile payment usage options available to consumers. And there's too much disjointed competition fighting over a relatively small user base.

And that's a lesson retailers and developers alike need to keep in mind when progressing with future iBeacon projects.

The Shopkick and Macy's deal offers a way to target customers as they shop in a way that's familiar to anyone who has used a shopping app. But future implementation of iBeacon technology in a retail environment needs to learn the lessons of NFC mobile payments: keep it simple, make it useful, and don't needlessly overcrowd the market.