Investors love stocks that consistently beat the Street without getting ahead of their fundamentals and risking a meltdown. The best stocks offer sustainable market-beating gains, with robust and improving financial metrics that support strong price growth. Does Suncor Energy (NYSE:SU) fit the bill? Let's look at what its recent results tell us about its potential for future gains.

What we're looking for
The graphs you're about to see tell Suncor's story, and we'll be grading the quality of that story in several ways:

What the numbers tell you
Now, let's look at Suncor's key statistics: 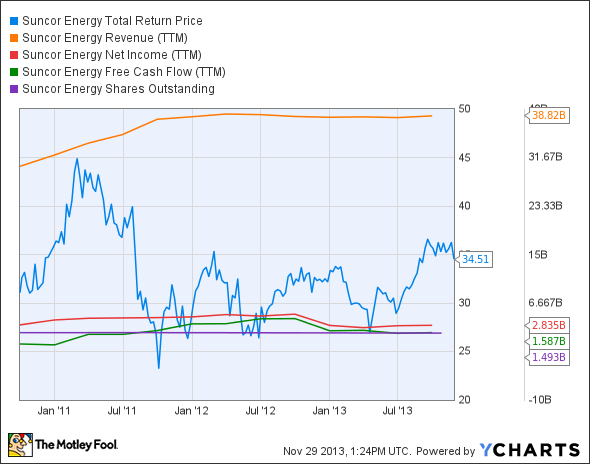 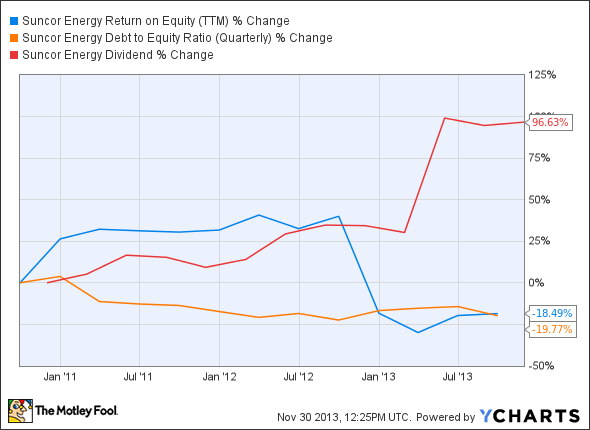 How we got here and where we're going
Things don't look good for Suncor in its second assessment, as this Canadian oil sands producer has dropped four of the eight passing grades it first earned last year, to finish with a middle-of-the-pack four out of nine possible passing grades for 2013. The company just missed out on earning a passing grade for revenue growth because of weaker domestic oil prices, which is thanks to a combination of increased oil and gas production in North America and a long-running reduction in petroleum use after the recession. The paradox of more production but weaker profitability hurt Suncor elsewhere as well, but it's at least holding both revenue and free cash flow in positive territory these days. How can Suncor overcome macroeconomic issues beyond its control and again become one of the stronger stocks on the market? Let's dig a little deeper to find out.

Suncor recently posted market-topping third-quarter results, as it's produced staggering growth in production from oil sands over the past decade. Fool contributor Rupert Hargreaves points out that producing oil from the Canadian sands has become more profitable thanks to scale and efficiency improvements, but investors have overlooked this because of the persistently high cost of oil sands production. Suncor's oil sands production costs were roughly $35 per barrel in the third quarter, far higher than supermajors ExxonMobil (NYSE:XOM) and Chevron, which averaged production costs of $10.50 and $8.70 per barrel, respectively, from more diverse exploration operations five years ago.

Fool analyst Taylor Muckerman notes that Suncor has been eyeing other unconventional reserves, such as offshore oil, to boost their production capacities. Suncor has around 6.5 billion barrels of recoverable resources including several quality assets in Athabasca along with a 12% working interest in oil sands joint-venture Syncrude. These holdings should last for more than three decades at current rates of production, which makes Suncor one of the most consistent long-term oil sands investments. The company also aims to boost its production capacity by 100,000 barrels per day through investments in low-risk projects. Suncor's should also generate strong cash flow from its sand mining operations at the Fort Hills and Joslyn project, which boast overall production capacities of 180,000 and 100,000 barrels per day, respectively. The company's recently introduced Autonomous Haulage System should help it cut down operational costs through greater fuel efficiencies, less wear and tear, and more volume hauled per mining vehicle, which will be run without a human driver.

However, ExxonMobil recently bought out a 226,000-acre position in Alberta, which will expand its presence in Canadian oil sands through subsidiary Imperial Oil (NYSEMKT:IMO), and which more importantly signals further supermajor approval of the sands' long-term value. Imperial Oil itself has recently started production on its Kearl oil sands project, which boasts 4.6 billion barrels of recoverable oil reserves. This surge in production from other large oil sands producers could undermine Suncor's growth by crimping prices, unless of course international demand outstrips the available global supply in the near future.

Warren Buffett's Berkshire Hathaway (NYSE:BRK.B) recently saw its stake in Suncor grow to $644 million thanks to rising share prices, and it's also accumulated a $3.4 billion position in ExxonMobil amid record North American oil and gas production. Fool contributor Tyler Crowe points out that Suncor and other Canadian oil sands producers currently lack pipeline and refining infrastructure, which has Canada's heavy crude trading at a $15 to $20 discount to WTI. However, Berkshire Hathway's Burlington Northern Santa Fe railway could provide relief from transportation constraints with new terminals in the area, should Buffett decide to further support his investments north of the border.

Putting the pieces together
Today, Suncor Energy has some of the qualities that make up a great stock, but no stock is truly perfect. Digging deeper can help you uncover the answers you need to make a great buy -- or to stay away from a stock that's going nowhere.