With the market leaping higher by 25%, this has been a great year for stock market investors. Of course, individual stock performances varied wildly around that average.

Today I'm taking a look at three restaurant stocks that sizzled in 2013: Wendy's (NASDAQ:WEN), Chipotle Mexican Grill (NYSE:CMG), and Buffalo Wild Wings (NASDAQ:BWLD). As you can see from the chart below, each of these companies trounced the broader market's impressive run this year. 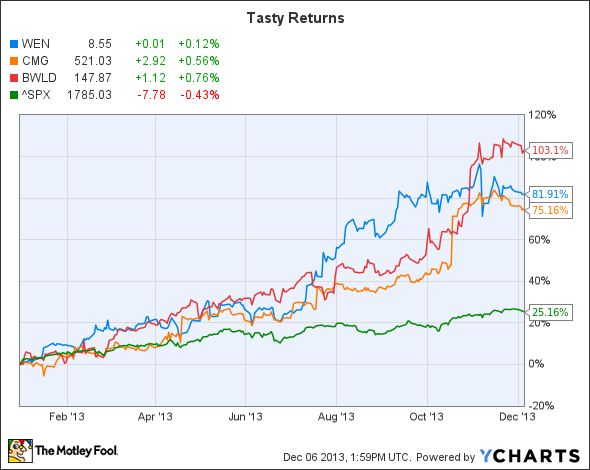 Chipotle is back
Fueling Chipotle's bounce was the fact that it returned to industry-leading revenue growth in 2013. After seeing its comparable store sales, or comps, decelerate for six straight quarters, the burrito slinger rebounded in the second half of the year.

That 6.2% growth figure for the third quarter is impressive in at least two ways. First, it's well above what rival restaurants are notching. Panera Bread, as just one example, saw its comps grow by 1.7% last quarter.

And second, unlike in Panera's case, Chipotle managed that sales growth without the benefit of higher menu prices. That means that the company is winning additional revenue the hard way: through increased customer traffic alone. And it also points to sales and profit growth ahead, when Chipotle finally does decide to raise its prices in line with higher food costs.

Meanwhile, Wendy's path to outperformance had a lot less to do with its sales growth. In fact, Wall Street expects the fast-food chain to actually shrink revenue by 15% next year. But that's because it's in the middle of a transformation aimed at making the company more profitable. Wendy's is selling hundreds of company-owned restaurants to franchisees, which will drop its ownership level from 22% down to 15% of the store base. The trade-off to losing the revenue from those stores will be increased profitability, stronger cash flow, and a more predictable revenue stream that comes from additional franchisees, and not just customers.

Of course, Wendy's transformation plans wouldn't be worth much if the brand wasn't growing. The news on that front has been good, as well. Comps grew by a solid 3.2% last quarter, boosted by the hit pretzel bacon cheeseburger. Wendy's is hoping to build on that momentum with more pretzel-based products, as well as with investments in modernizing its stores.

B-Dubs is taking flight
But Buffalo Wild Wings takes top honors in 2013, as it stormed out to a 100% return this year. The company accomplished that feat by turning a huge weakness into a major strength.

Last year, B-Dubs' profitability was hammered by a spike in chicken wing prices, which was compounded by the fact that it sold its wings by the piece, while purchasing them by the pound. Because farmers have also been raising heavier poultry, those two trends sent B-Dubs' per-wing costs higher by 90% in some cases.

But the company has now transitioned its menu onto a weight-based ordering system, and customers have embraced the change. B-Dubs saw its comps jump by 4.8% in the third quarter, and its earnings spiked higher by almost 70%. Looking ahead, investors can expect continued profit growth as chicken wing prices moderate and new restaurant locations come online.

Foolish bottom line
These are three very different restaurant chains, and each took its own path to stellar outperformance in 2013. But they still shared a few important characteristics.

For one, they have a product, and brand, that is resonating with customers. Next, they have a management team that's skillfully guiding them through difficult terrain. And finally, these companies surprised Wall Street by succeeding in an industry that lots of investors had decided to avoid this year.