The Brazilian state-controlled firm will continue to underperform the broader markets as political meddling and a lack of free-market dynamics continues to hinder its progress.

For big integrated oil companies like ExxonMobil (XOM -0.55%) and Chevron (CVX -1.17%), one of the biggest challenges is to find new reserves large enough to replace their huge legacy assets and allocate capital economically. For Petroleo Brasileiro Petrobras SA (PBR -3.84%) (PBR.A -3.20%), the problem is different. The Brazilian state-controlled firm continues to underperform the broader markets as political meddling and a lack of free-market dynamics continue to hinder its progress.

While both ExxonMobil and Chevron underperformed the broader markets over the last five years, Petrobras lost a staggering 40% of its market value over the same period. On delving deeper, however, this isn't too surprising. 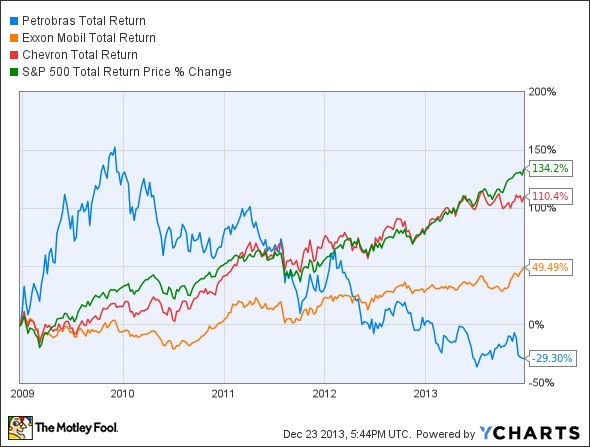 A piggy bank of sorts?
Petrobras seems to be an oversized piggy bank for the Brazilian government to draw from in order to carry out populist measures. With national elections due in October next year, the government showed its unwillingness to increase fuel prices to levels that the market was expecting due to fears of inflation, which is forecast to be 5.8% for 2013.

Investors, however, must keep in mind that Petrobras had reported a massive $5.7 billion net loss from its refining, transportation and marketing division in the first nine months of 2013. Unfortunately, these numbers don't seem likely to improve much after the price raise. According to analysts at Brazil's Itau BBA Bank, post-hike, diesel and gasoline still sell at a discount of 22% and 17%, respectively, to international prices.

Here are three reasons why Petrobras could give investors nightmares:

A lack of transparency
The new fuel pricing policy adopted by Petrobras is opaque at best. On November 29, the company announced in a filing that the new pricing policy aims to bring an "alignment between Brazilian and international prices" within "a compatible time period". But the same filing also mentions that "the parameters of the pricing methodology will be strictly internal to Petrobras" for commercial reasons. This was a perfect recipe for disaster. In other words, the market did not buy the argument. The next trading session saw Petrobras shares plunge 11%.

In order to stem the rot, the company put out a clarification the very next day that the changes won't be automatic, and that the Board still holds discretion to adjust prices within certain ranges. Analysts, however, believe that this clarification still doesn't clear the view for the market. One thing seems certain: Petrobras continues to lose money on its refined products, whether it's domestically refined or imported.

A mammoth spending plan
Among oil companies, Petrobras has the world's largest corporate spending plan for the next few years -- thanks to the discovery of some of the world's largest offshore reserves. With $237 billion to be spent between 2013 and 2017, this is definitely a huge investment. This means, on average, Petrobras is investing a whopping $47.4 billion every year till 2017. To put this into perspective, Chevron plans to spend $40 billion in 2014, down from $42 billion in 2013. ExxonMobil, on the other hand, spent $38 million this year.

But these mammoth figures don't mean much in terms of increasing shareholder value. Debt is at its highest levels in over ten years. Here's how debt levels stand for large integrated companies:

We notice that Petrobras currently has the worst debt levels among integrated oil companies. At $123 billion, total debt is a staggering 42% more than its total market capitalization. Even if revenue increases substantially as the massive offshore fields come into production, investors must proceed with caution as most of the earnings will go towards reducing debt. In the long term, shareholder value may be destroyed as expected share returns may not be enough to cover the cost of capital.

Massive cost of production
With the first two factors already working against Petrobras, the final point is a foregone conclusion. However, the reason why I'd specifically point out the cost of production as a major issue is the fact that almost all of the company's oil reserves lie offshore in the pre-salt basin off Brazil's coast. What needs to be kept in mind is that costs can spiral north in the uncertain environs of deepwater drilling. Additionally, the government has mandated Petrobras take part in all exploratory activities -- successful or not. It also tightened safety standards for offshore oil platforms and refineries, thanks to the REPAR refinery fire on November 28. While these are definitely positive measures, all of a sudden the company has an extra expense to foot within the next two years.

Moreover, with near-6% inflation, costs associated with exploration and production activities, as well as those involved with building new refineries, are highly likely to go up. The central bank predicts inflation to drop to 5.6% in 2014.

Foolish bottom line
Everything seems vague with respect to the future. There doesn't seem to be a marked out plan for Petrobras' progress. The company seems big on promises, but it remains to be seen how it will deliver on these promises. For the time being, I'll stay far from this stock.