Shares of struggling Best Buy and J.C. Penney have fallen 37% and 27% this year. Even Lululemon has fallen nearly 20%. Is traditional "bricks-and-mortar" really dying?

If you're invested in -- or thinking about investing in -- any of the three, the only question that matters, is if the problems are fixable or not. Let's take a closer look at the three and see where things stand: Should you buy, sell, or hold?

Perception is reality
2013 saw Lululemon deal with the embarrassment of see-thru pants, which led to the departure of Chief Product Officer Sheree Waterson. Two months later, the company announced that CEO Christine Day would be leaving after less than six years with the company. Don't forget the year ended with a bang, too. Founder and chairman of the board Chip Wilson essentially said -- with words only moderately more toned down -- that some women were too big for Lululemon's britches, but were wearing them anyway. He's stepping down as chairman in June, but will remain on the board.

The bottom line is "spandex-gate" (though the offending pants are actually mostly luon) and Wilson's comments did hit the company where it hurt -- right in the reputation with its women clientele -- and for an upscale brand like Lululemon, its reputation with customers is irreplaceable. However, the company is still growing at a nearly 19% clip, and just reached $1.5 billion in annual sales this year: 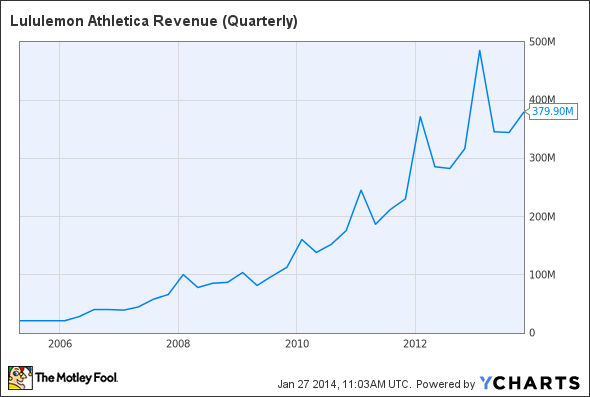 What the chart above doesn't tell you is how much of Lululemon's growth has been a product of those loyal customers remaining loyal, with comparable store sales growth at or above 7% consistently, since the recession. Q4 (which ends next week) was originally projected to be flat comparable growth, but was recently revised down to "negative low to mid single digits." Management is partly blaming the extreme cold weather this month; and with a recent history of extremely thin material in its pants, maybe the weather -- and the company's bad rep from 20133 -- is coming back to bite Lululemon in the butt, so to speak.

The good news is a new management team is coming together. Tara Poseley, named Chief Product Officer in October, has a strong resume, with time at Gap and Bebe Stores, and a recent stint as president of apparel at Kmart, where she oversaw a larger organization than all of Lululemon. Laurent Potdevin was recently named CEO, after serving as president of TOMS Shoes, Burton and LVMH.

Losing relevance in a changing consumer world
Best Buy and J. C. Penney are both facing this change. Over the past half-decade, an enormous amount of consumer spending has shifted away from traditional bricks and mortar retailers as people have become more accustomed to the ease and convenience of the web.

The interesting thing is, since 2008, Best Buy's total sales are actually up 20%, and it's certainly more a victim of the success of the Amazon's of the world than Penney is, while Penney's revenue is down more than 39% over the same time period. Best Buy has benefited from the demise of Circuit City, and its sheer size and presence has buoyed it to some extent, but sales are down almost 7% in the past nine months. We just learned that sales dropped 1.5% over the holiday shopping season just ended, so sales will be down for the full year.

Definition of insanity
Penney, on the other hand, is challenged with rediscovering favor with shoppers after spending 2012 and 2013 confusing and alienating them via two about-faces before taking the same approach as before. The company may run out of time (and money) before it's able to reestablish a message that resonates with shoppers and brings profits. For now, it's back to discounts and sales, the same formula that resulted in declining revenue and profits, and the ouster of CEO Mike Ullman -- who's now back in charge -- and has implemented the same marketing strategy.

The difference today? Billions in losses, a massive 40% dilution for investors through a stock offering to generate capital, and more losses to come. But the company is trying the exact same market strategy that was failing three years ago...

Final thoughts
Best Buy has the advantage of being the only major "analog" retailer in consumer electronics and appliances. The company has put serious focus on its web business, and is now using 400 of its stores as warehouses to fulfill web orders. If the company is able to attract customers and grow its online business enough, this hybrid approach could lead to it remaining viable. Despite falling sales numbers, Best Buy was profitable in the first three quarters of 2013, and will likely be so in Q4.

J.C. Penney is absolutely hemorrhaging money, and is in more trouble than management will admit. Even if the holiday quarter brings a sales increase from 2012, the bar was so low it almost wouldn't matter, since it's about stopping the bleeding at this point. The recent announcement that 33 stores will be closed is a step in the right direction, but I'm not convinced that this management team can get it done before the clock stops.

Lululemon still has all sorts of promise, and a ton of loyal customers, despite management's best efforts to run them off. The recent changes in leadership that has deep experience in both large retail like Gap and Kmart, and brand-oriented companies like Bebe and LVMH, should bring what sounds like much-needed new blood, and hopefully tact. With less than 200 stores, there's just too much growth ahead to give up now.

Jason Hall has no position in any stocks mentioned. The Motley Fool recommends Lululemon Athletica. We Fools may not all hold the same opinions, but we all believe that considering a diverse range of insights makes us better investors. The Motley Fool has a disclosure policy.