Please ensure Javascript is enabled for purposes of website accessibility
Log In Help Join The Motley Fool
Free Article Join Over 1 Million Premium Members And Get More In-Depth Stock Guidance and Research
By Travis Hoium - Feb 2, 2014 at 10:00AM

The history of giant retailers going belly-up is long and distinguished, and the red flags are emerging at retail giant Wal-Mart. Will it go the way of Sears, or even Woolworth?

Wal-Mart (WMT 5.11%) recently reported that it will be laying off 2,300 workers at its Sam's Club subsidiary, reportedly to cut the fat of middle management. Layoffs in and of themselves aren't uncommon at any large company -- competitor Target (TGT 4.57%) also recently said it would lay off nearly 500 employees and keep hundreds more positions vacant -- but such personnel reductions also aren't something a growing company does very often.

What's worth keeping an eye on is whether the Sam's Club layoffs are a symptom of much larger problems at Wal-Mart. The company has been a giant of retail for decades, but there are signs that its reign is coming to an end.

The king of retail doesn't stay king long
Wal-Mart is certainly the king of retail today, commanding $475 billion in sales in 2013 alone. But the list of retailers that have gone from dominance to mothballs is long and distinguished.

F.W. Woolworth was once one of the largest retailers in the world, creating the modern retail model that Wal-Mart eventually perfected. Started in 1878, the company expanded until sales began to decline in the 1980s, around the same time Wal-Mart began to hit scale. By 1997, Woolworth was completely gone, changing its name to Foot Locker to focus on the remaining sneaker business.

The Woolworth Building was the tallest building in the world when it was completed in 1913, a monument to the retailer's size. Image courtesy of the Library of Congress.

Not long ago, Sears and Kmart were both big names in retail, but they're now a laughingstock of the industry. Kmart went through bankruptcy once in the early 2000s and bought Sears when it emerged under Eddie Lampert's leadership, forming the Sears Holdings (SHLDQ) we know today. Now the new Sears is struggling just to stay afloat and may end up in bankruptcy before long.

The list of high-profile retail failures goes on and on. From Montgomery Ward to Circuit City to K-B Toys to Mervyn's, it's a tough business to be in and success today doesn't guarantee success tomorrow.

Wal-Mart's problems are starting to show
If Wal-Mart is the next giant retailer to go under, it won't happen overnight. Failure in retail starts with a trickle. Consumer trends make your stores less popular, a rival grows from out of nowhere, and eventually same-store sales begin to fall and you're on the road to failure.

That last factor is why investors should be concerned about Wal-Mart, because same-store sales were down in each of the last three quarters. Sam's Club has fared slightly better but still isn't growing as fast as the economy.

The fourth quarter will make a full year of declining same-store sales for Wal-Mart. Retailers were forced to discount heavily this holiday season and more consumers switched to buying products online. Wal-mart is scheduled to report Q4 results on Feb. 19.

Those online retailers are now the No. 1 challenge for Wal-Mart. According to its recent earnings release, Amazon.com (AMZN 1.12%) had $74.45 million in sales in 2013. 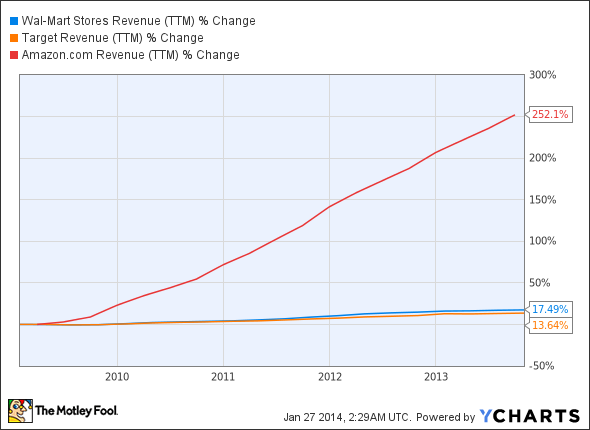 What makes Amazon a bigger threat today is the company's sheer size. It's now bigger than Target, and every percentage point of growth takes growth away from Wal-Mart. In fact, Wal-Mart's budget-conscious consumers are probably more likely to shop on Amazon than Target's consumers.

Retail failures happen quickly
It doesn't take long for a retailer to go from the top of the world to bankrupt. Kmart lost just $22 million in the second quarter of 2001, but was bankrupt by Jan. 22, 2002. In the four months leading up to bankruptcy, same-store sales fell 1.8%, 4.4%, 2.6%, and 1%, respectively, from a year earlier. You don't need a big decline in sales to suck up all of your profits in retail.

Circuit City reported a 4.2% rise in same-store sales as late as December 2006, even raising its fiscal-year guidance to growth of 7%-8% in U.S. stores. But by December 2007, same-store sales were down 11% for the month and the company would be out of business by November 2008. From optimism to bust in less than two years.

The reason that retailers are sensitive to declines in sales is that there is a lot of overhead that goes into selling in brick-and-mortar stores. Wal-Mart spent $89.2 billion on overhead over the past year, and based on current margins and overhead spending, it would only take a 13.6% decline in sales to eat up all of Wal-Mart's profits.

Will Wal-Mart go under?
It's far too early to say that Wal-Mart will eventually be a laughingstock in retail like Kmart, but the warning signs are there. Same-store sales are down, consumers are trending away from brick-and-mortar stores as a whole, and Wal-Mart is cutting staff to save costs. If those trends continue, it won't be good for the future of Wal-Mart.

It may be unthinkable to even consider that Wal-Mart could go bankrupt one day, but this wouldn't be the first big-name retailer to go under. As I've pointed out above, once a retailer stops growing, the fall can be fast and furious. At the very least, I'd be wary of Wal-Mart as an investment right now, because it's neither a growth stock nor a great value in a floundering retail environment.

Travis Hoium manages an account that owns shares of Target and is personally short shares of Amazon.com. The Motley Fool recommends and owns shares of Amazon.com. Try any of our Foolish newsletter services free for 30 days. We Fools may not all hold the same opinions, but we all believe that considering a diverse range of insights makes us better investors. The Motley Fool has a disclosure policy.