Please ensure Javascript is enabled for purposes of website accessibility
Log In Help Join The Motley Fool
Free Article Join Over 1 Million Premium Members And Get More In-Depth Stock Guidance and Research
By Brian Stoffel – Feb 8, 2014 at 7:00AM

Are you inadvertently poisoning your child? A recent report out of the state of Washington shows how widespread the use of potentially dangerous chemicals in toys and other children's products really is.

We laugh when we see ads like the one below. "How silly people were back then, thinking they could give their kids cocaine for a toothache!" we say to ourselves. The problem is, our kids might look back on us and think the same thing -- only now, we won't be able to feign ignorance. A recent report out of Washington state shows why.

Back in 2008, the state of Washington passed a first-of-its-kind law called the Children's Safe Products Act (CSPA). The basic gist of the law was that manufacturers of children's products have to report when a product they offer contains any ingredient on a list of 66 "chemicals of high concern."

That law is just now being phased in at full strength, and on Thursday the Washington Toxics Coalition (WTC) came out with a report detailing what they discovered in reviewing disclosures from the manufacturers.

The results will give parents a lot to think about before buying just about anything for their child.

A breakdown of the findings
Between March and September, WTC found that 78 different manufacturers submitted 4,605 reports of products containing chemicals of high concern. (Though CSPA only pertains to one state, many of the products sold in Washington are the same as those offered in other states.)

Below are the six broad products the WTC chose to highlight, what chemicals were found, and what the deleterious effects of these chemicals could be.

Obviously, one run-in with a potentially carcinogenic product is highly unlikely to mean that your child will immediately come down with a form of cancer. In fact, almost no one knows if exposure to these chemicals via clothes, toys, and other children's products is a cause for immediate concern.

But that uncertainty causes fear that, over time, chemicals on the "High Concern" list could increase the chances for cancer, as well as hormonal, developmental, and reproductive defects.

As a parent to a newborn myself, I want to know that what I'm buying for my daughter hasn't been dipped, treated, or sprayed with something that -- over time -- is going to cause unnecessary suffering.

The biggest offenders, and what it means for investors
The WTC also provided a list of the companies that submitted reports for products containing high-concern chemicals. The top 10 include many familiar, publicly traded names.  Because clothing and footwear products accounted for the most reports, it should be no surprise that VF Corporation (VFC 0.15%), the parent company of JanSport, The North Face, and other brands, Gap (GPS 1.74%), Nike (NKE 1.23%), and Fifth & Pacific (KATE) -- formerly Liz Claiborne -- were all on the list.

Joining them were Wal-Mart (WMT -0.35%) and Target (TGT 0.60%), which also should not be surprising given the sheer volume of products each of these behemoths offer at their stores. 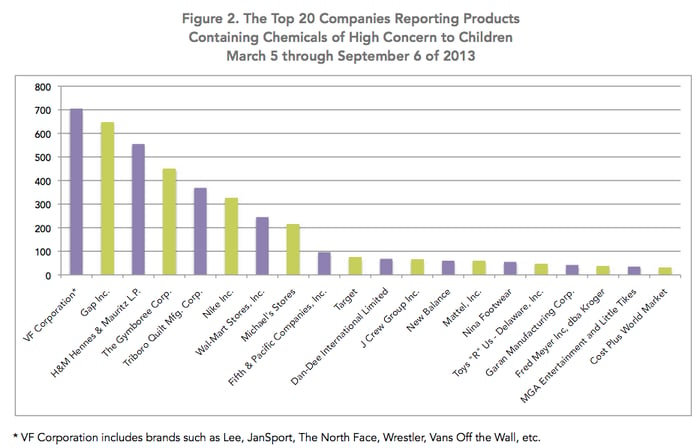 A knee-jerk reaction would be to condemn all of these companies as evil: profiting by selling harmful products to our children. But such a stance would ignore several important variables at play.

For instance, the companies that sell the most children's products are more likely to have to submit reports for high-concern chemicals. For that reason, we might give a thumbs-up to a company like Target -- which has a wide array of offerings but less than 100 reports of such chemicals -- and question why Triboro Quilt, which has less than 50 employees total, is so high on the list.

Even more important, however, is that the list ignores the fact that many of these companies are just becoming aware of such toxicities right now as well. As WTC states: "Some of the largest reporters may be the companies that are trying to get control of toxic chemical use throughout their supply chain... Many ... are also implementing toxic chemical reduction activities and have adopted toxic chemical restriction lists."

Following the passage of CSPA in 2008, Wal-Mart said it would be working with suppliers to eliminate such chemicals. Gap and VF Corp. also made a statement to the same effect. In 2011, Nike vowed to begin eliminating such chemicals. And just this past October, in response to pressure from the "Mind the Store" campaign, Target adopted a policy for eliminating toxins from its supply chain.

For investors, it's simply too early to tell if any of this could lead to significant changes in the underlying fundamentals of each business.

As concerned parents, beyond simply being more careful when you go shopping, you can peruse the entire list amassed by the Washington State Department of Ecology by clicking here.

Invest in companies where this is never a concern

Brian Stoffel has no position in any stocks mentioned. The Motley Fool recommends Nike. The Motley Fool owns shares of Nike. We Fools may not all hold the same opinions, but we all believe that considering a diverse range of insights makes us better investors. The Motley Fool has a disclosure policy.