According to Warren Buffett, there are two simple and costly mistakes most of us make when managing our personal finances.

Warren Buffett of Berkshire Hathaway (NYSE:BRK-A)(NYSE:BRK-B) is the third richest man on the planet, and knows a thing or two about success when it comes to money and investing.

He is a man whose wisdom should be trusted. And while he is full of investment advice, he also doesn't stray to give insight when it comes to personal finances as well.

On personal finances
Buffett recently teamed up with Quicken Loans to offer someone the chance to win $1 billion for a perfect NCAA bracket. When he went on the Dan Patrick Show to discuss the bracket-challenge, Dan asked him a simple question, "What's the biggest mistake we make when it comes to money?" and Buffett had a direct, but vitally important response:

So often when money and investing is considered, it's easy to fall into the trap of thinking that saving can wait until a later date, and that the best investments are the ones that no one knows about. However, those thoughts are undeniably mistaken.

Let's also err on the conservative side of things and say that money grows at an annual rate of 7% each year, which is actually less than the average historical annual return of the S&P 500.

By the time each is 50, they would've each taken a little more than $144,000 out of their paychecks and put it toward retirement. But when they retire at 73, do you know who would end up with more money?

Despite earning half as much money over the course of his lifetime, David would end up with roughly 10% more than Michael. David would have $2.3 million in savings when they retired, and Michael would have $2.1 million: 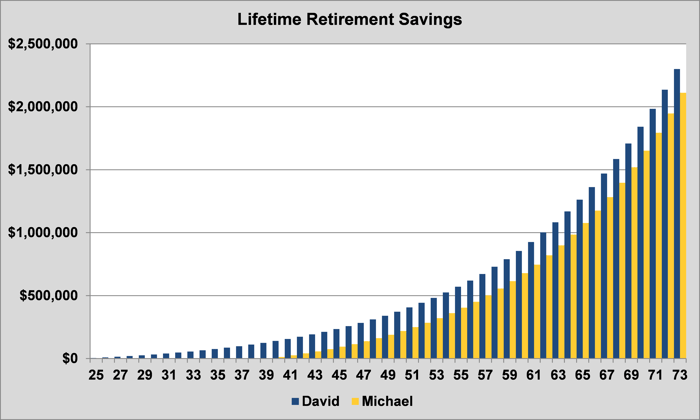 What is even more remarkable than David ending up with more money despite earning half as much in salary, is that ultimately Michael saved 60% more money than David (roughly $610,000 in savings for Michael versus $375,000 for David).

If you decide to get ambitious and say the money grows at 8.5% a year, David actually ends up with almost 30% more than Michael, with $3.7 million in savings versus $2.9 million.

What we can learn
All too often in investing people are taught, "in order to make money, you must have money," and the stock market is only useful if you find the next big company where your money is doubled in a matter of days.

Yet as Buffett expounds, and the example above shows, the true key to becoming rich is patient saving starting today and an understanding that wealth accumulation happens over the course of a lifetime.