Please ensure Javascript is enabled for purposes of website accessibility
Log In Help Join The Motley Fool
Free Article Join Over 1 Million Premium Members And Get More In-Depth Stock Guidance and Research
By Travis Hoium - Feb 21, 2014 at 12:00AM

The Dow Jones Industrial Average isn't going anywhere today, but Groupon's plunge tells us a lot about the risk and reward of tech IPOs.

The tepid week on Wall Street continues, with the Dow Jones Industrial Average (^DJI -0.50%) climbing throughout most of the day only to go flat late in trading. A new report from the National Association of Realtors released this morning said home sales fell 5.1% in January to a seasonally adjusted rate of 4.62 million, the slowest pace since July 2012. Weather may have played a role, but these figures are another sign that the housing recovery has slowed down in recent months.

The big loser on the market today is Groupon (GRPN -10.37%), which is down nearly 22% after reporting a solid 20% increase in quarterly revenue to $768.4 million but an $81.2 million net loss thanks to acquisitions and a nonoperating loss on an investment in China.

The online deal specialist's struggles since going public are a reminder of what a risky world tech IPOs can be. Groupon, Zynga (ZNGA), LinkedIn (LNKD.DL), and Yelp (YELP -1.71%) went public in 2011 and 2012, but their fates have been very different since hitting the market. 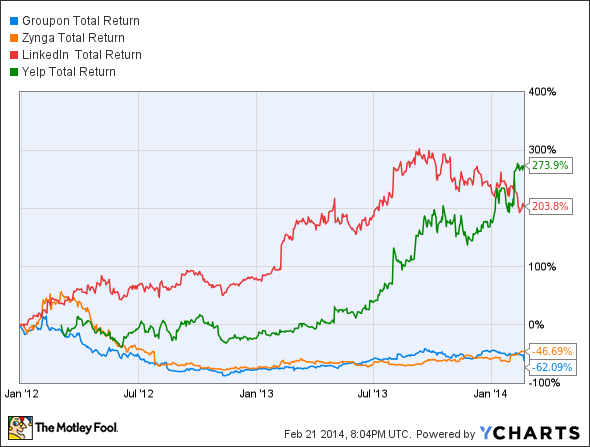 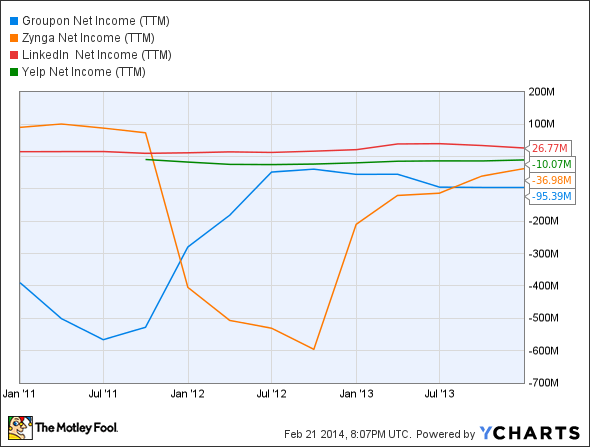 Even hot tech IPOs have to prove that they can make money, and the fundamentals of the business is what will drive stock performance.

Groupon is finding that out today, and unless it proves the ability to make money over the long term it will fade away like past hot tech IPOs. My money would be on LinkedIn and Yelp, which have built real business plans and are rewarding shareholders as a result.

Travis Hoium has no position in any stocks mentioned. The Motley Fool recommends LinkedIn and Yelp. The Motley Fool owns shares of LinkedIn. Try any of our Foolish newsletter services free for 30 days. We Fools may not all hold the same opinions, but we all believe that considering a diverse range of insights makes us better investors. The Motley Fool has a disclosure policy.