You've seen the recent brouhaha over Netflix (NASDAQ:NFLX) and its network connections. Consumers started complaining about lots of buffering or outright connection errors in their Netflix sessions, and then the company took action.

The digital-video maven signed an interconnection agreement with cable giant Comcast (NASDAQ:CMCSA). Verizon (NYSE:VZ) CEO Lowell McAdams told CNBC that he expects to do a similar deal before too long, and he sees Netflix connecting this way with lots of major Internet service providers.

Critics immediately came out of the woodwork. To some, this might be good for Netflix but it's the end of the open Internet as we know it. In their view, cable and phone companies now hold all the cards in network negotiations with major bandwidth hogs like Netflix, which saturates about one-third of all American Internet traffic. That's not the peak-hour bursting tops we saw a year ago, but more than 30% of all North American data traffic.

Others believe that Netflix will have to pay an arm and a leg just to provide the same service it used to offer. This cohort fears Netflix is paying a "Comcast toll" just to reach its customers. Expanding this view, the cable guys seem to be double-dipping into the Netflix business, getting paid on both the consumer and content provider ends of the data stream.

But Netflix's relationships with Comcast and Verizon look very different if you actually know something about the business and technology of Internet transit.

What lies ahead
If you want the full scoop, I highly recommend hitting up streaming media guru Dan Rayburn's 2,500 words on the Comcast agreement. I've bounced Rayburn's article off a veteran network engineer, and it all checks out -- from the technical walkthrough to ballpark cost figures.

Here, I'll start with some necessary technical detail and then boil the big picture down to what matters for Netflix investors. Cable and telecom shareholders could learn a thing or two about Internet data deals, too, which is important since data pipes are driving more growth than landline phones or even cable TV services. Understanding this stuff gives you a better view of the future.

So grab a cup of coffee and let's dive in. 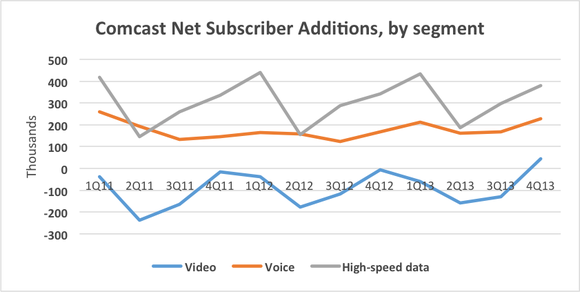 Large-scale networking for the common investor
The Internet is not a direct network pipe from your computer to the Fool or from your set-top box to Netflix servers. Maintaining a global network like that would be an impossible mess of spaghetti.

It's also not a big, fluffy cloud of totally open connections in every direction, where every computer and every network router along the way is programmed to find the absolutely fastest path to and from your destination. That would be nice, but it's another impossible simplification that doesn't account for varied network capacities and business interests along the way. 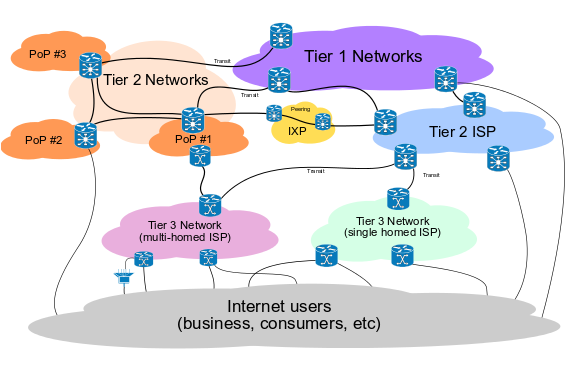 The big, gray cloud at the bottom of this rough map is you, me, and every other Internet consumer on the planet. The "pop" markers represent the online services we use, like popular web sites and digital media services. The other clouds are various classes of high-speed transit networks between these two endpoints, connected via a bundle of direct hook-ups -- black lines in the diagram.

Tier 1 networks come together as a single entity. By definition, they all have direct peering agreements with one another and will neither pay nor bill other Tier 1 networks any fees for accepting these data streams. These networks take transit payments from Tier 2 connections and below, but once you're in this particular cloud, you'll be able to reach the edges of any other Tier 1 networks at no additional cost.

The simplest version of this global access is known as "full transit," and gives you a path to the entire Internet from a single access point. But these plans come at a premium price -- and they often can't guarantee the quality you'd need in a streaming video service.

Tier 2 networks also peer with one another, but they're customers to the Tier 1 guys. Moving large chunks of data from a Tier 2 network to a Tier 1 will normally cost you, and this is how Tier 1 providers make money on their transit operations.

Tier 3 operators generally don't own nationwide or even regional networks of their own. Instead, they pay for transit from Tier 1 or Tier 2 operators, and then resell that capacity to local customers.

NAP of the Americas, bristling with network and computing resources as well as high drama right off the Dolphin Expressway and Biscayne Boulevard. Image source: Verizon Terremark.

Rub-a-dub-dub, connect in this hub!
Content providers the size of Netflix can't serve their customers out of a single data center. Instead, Netflix leases space in major network hubs like Tier 1 player Verizon's 750,000 square-foot NAP of the Americas tower in Miami or the equally huge Equinix (NASDAQ: EQIX) hub in the New York skyscraper famously owned by Google (NASDAQ: GOOG).

In nerve centers like these, Netflix has access to pretty much any major network in the area. All you have to do is reach a business agreement with the chosen target and start pulling high-speed cables from, say, the seventh floor to the third floor of the same data center.

This is where the magic happens. So far, Netflix has mostly connected to Tier 1 providers or leased content delivery services from specialists like Akamai Technologies (NASDAQ:AKAM) in these megahubs. The move off Akamai and other third-party CDNs is leading Netflix to install its own Open Connect hardware in network centrals. Cogent Communications (NASDAQ:CCOI) is a key provider of Netflix's Tier 1 services -- and one that Rayburn points out as a noisy choice. Cogent may offer Netflix solid uptimes in service level agreements, but doesn't always follow through with reliable connections down the network ladder.

Doing the same thing but better
And that's where direct connections with Comcast and others come in.

Cutting out the middle man -- Cogent, for example -- may or may not deliver cost savings for Netflix. There's a million ways to set up an interconnection contract, the devil is in the details, and neither Comcast nor Netflix are sharing the specifics of this deal.

Based on typical network contracts, Rayburn estimates that the Comcast agreement might cost Netflix something like $12 million a year. But Netflix is hardly a standard bandwidth user, and might have volume-based leverage to work out a better deal than this. Either way, the Comcast arrangement will most likely be cheaper than the old route to Comcast users via Cogent and other Tier 1 providers. Netflix may get double-billed for a while, depending on the terms of existing Tier 1 deals -- expiration dates, early termination penalties, and so on.

But the new Comcast interconnection is as close as you'll get to slapping Netflix servers straight into Comcast's own infrastructure, comes with a multiyear commitment, and should save Netflix both money and heartburn in the long run.

"The winner in the whole deal is you and me, the consumer," Rayburn says. "We get better quality video and Netflix gets a cheaper cost over time to deliver the stream to us, which keeps them from having to raise the price of our subscription to give us better quality."

The big takeaways
I couldn't agree more. Expect Netflix to strike plenty of these deals with Verizon and other major consumer-facing networks. It's good for Netflix, it's good for end users, and it gives last-hop providers like your local cable company more direct access to the profit margin that was previously lost to middleman fees. Also, Comcast gets to brag about its high-quality Netflix streams in the next junk mail bundle. Everybody wins -- except Cogent in this case.

The whole circus also underscores how the big money in Internet connectivity lies in selling services to content distributors like Netflix and to end users like us. There's a global hunger for more and more digital video, tele-medicine, and other high-bandwidth services, and the only way to satisfy this appetite without choking on overwhelmed backbone networks is to keep pushing the content closer to the end user.

Akamai may have lost its favored seat at Netflix's table, but will undoubtedly make up for this by serving a plethora of customers with newfound delivery needs. Network providers of every tier get to enjoy a long surge in downstream transit fee growth, giving them every incentive to sell more of these client-facing services.

The Tier 1 cloud will always remain as a last resort, but is quickly becoming a rare edge case that you don't access as often as you might think. And if Netflix made history by paying direct connection fees to Comcast, it's leading the way into a hyper-optimized networking future rather than killing the open Internet.