How it moves its oil

Kodiak Oil & Gas moves a lot of its oil out by rail. Over the past two months, 80% of its oil production moved by rail, while just 20% flowed out on pipelines. While there's more risk to moving oil by rail, the rewards of obtaining higher oil prices makes it worth the risk for many producers in North Dakota.

By moving its oil by rail, Kodiak Oil & Gas was able to ship 40% of its oil to the East Coast markets over the past two months where it obtained higher Brent based prices. On top of that another 15% of its oil went to the West Coast while 20% went to the Gulf Coast, both areas where the company can also get a premium for its oil. This market flexibility will really fuel earnings and cash flow for the company going forward.

That said, many investors are worried about the risks of shipping oil by rail. However, Bakken-focused peers Whiting Petroleum (NYSE:WLL) and Continental Resources (NYSE:CLR) both think the risks remain overblown. Whiting Petroleum, for example, noted on its conference call that 100% of its crude oil coming out of the Bakken is being handled correctly. Moreover, it sees just 3%-5% of the trucks and rail cars carrying crude oil not meeting new standards, which suggests that costs for shippers shouldn't be going up all that much. Continental Resources basically echoed those statements as the company said that it's "pretty comfortable" with shipping its crude oil by rail as the industry is already working to improve safety. This suggests that Kodiak Oil & Gas might not have any future problems shipping its crude oil by rail so it should continue to obtain premium pricing for its oil.

Gas sales going up
Another really important future profit driver is the fact that Kodiak Oil & Gas isn't flaring as much natural gas. The company noted that it has improved the sale of its gas from 51% of its produced volumes in January 2013 to 66% of produced volumes this past January. One of the reasons for this, and something that Continental Resources noted on its conference call, is that more gas-processing capacity has been added to the region and this is enabling the industry to reduce flaring. While both Kodiak and the industry still flare a lot of gas, the trend is certainly heading in the right direction.

Downspacing
The final key area worth noting at Kodiak Oil & Gas is the progress it is making with its downspacing projects. As the following slide shows, the company is working on the ultimate optimized plan to develop its acreage. 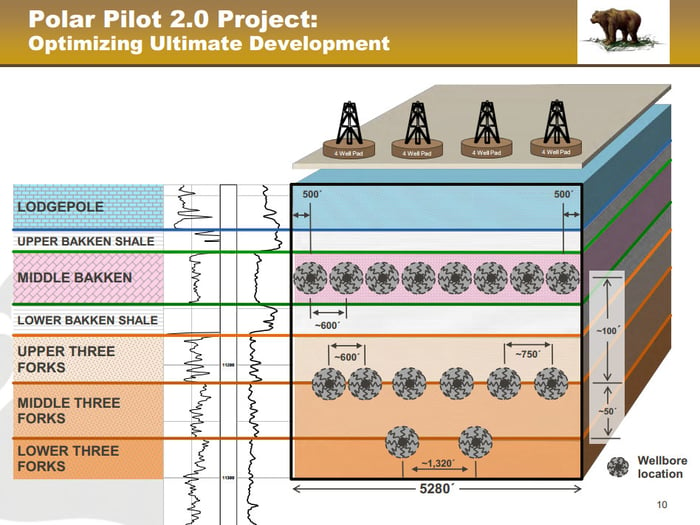 On the conference call Completions Manager Ron Finch made an interesting analogy on how the company thinks about downspacing when he said that:

The evaluation of the optimum lateral density for the Middle Bakken and Three Forks system is analogous to determine how many straws will be used to drain a Punchbowl when each straw costs nearly $9 million. It is a balance between acceleration of recovery versus the cost.

Basically, Kodiak Oil & Gas, as well as Continental Resources and Whiting Petroleum for that matter, are looking for the optimal economic way to extract the oil and gas. So far, these companies have found that wells can be drilled closer together without causing too much interference. That will enable these companies to drill more wells than previously thought, which will ultimately recover more oil and yield higher returns. While Kodiak hasn't yet determined the optimal spacing, it is getting closer with each test.

Investor takeaway
Kodiak Oil & Gas is getting more money for its oil and gas while at the same time refining its development plan. We're seeing a real shift from resource capture to resource development. This new approach should continue to yield improved results and create value for investors.