J.C. Penney (OTC:JCPN.Q) was up 14% after-market last Wednesday following its fourth-quarter and full-year report. The company reported its first profit since before former CEO Ron Johnson tried to reinvent the company with stores-within-stores and fewer promotions. J.C. Penney also reported a comparable-store sales increase that fell only slightly behind those of competitors Macy's (NYSE:M) and Nordstrom (NYSE:JWN). Will J.C. Penney's improvement hold once customers adapt to the undoing of Johnson's unpopular strategies?

The company had already provided a glimpse of its holiday quarter. However, the fourth-quarter report fleshed the results out with more data. Overall revenue was $3.78 billion -- down 2.6% over the prior year's quarter -- and online sales jumped 26% to $381 million. Loss per share came in at $0.68 when excluding certain tax benefits and asset sales. Analysts had predicted revenue of $3.86 billion and loss per share of $0.85.

There were also three more factors from the earnings release that showed how J.C. Penney gained strength in the fourth quarter.

Comparable-store sales
Fourth-quarter comparable-store sales for J.C. Penney were up 2% in a quarter when Macy's and Nordstrom reported comps growth of 1.4% and 2.6%, respectively. (Macy's comps growth jumped to 2.3% with the inclusion of third-party licensed stores.) That small increase looks more impressive in comparison with the nearly 22% comps drop that J.C. Penney suffered in the fourth quarter of 2013. The full-year comps dip of 7.4% also improved upon 2012's 25% drop.

The comps improvements showed how much customers disliked what was happening during Ron Johnson's time at the helm. That fact was further reflected in the earnings release, where home was mentioned as one of the best performing segments for the quarter.

The home segment received one of the largest overhauls after Myron Ullman stepped back in to undo Johnson's changes. J.C. Penney didn't provide a figure in the release for how well home performed, but the fact that the numbers weren't negative speaks well to the restocking strategies.

However, what about the inventory problems those restocking strategies caused?

The company noted in the third-quarter report that markdowns were necessary to help clear two quarters worth of unsold inventory. However, Myron Ullman claimed on the associated conference call that the inventory issues would resolve by spring of this year.

The fourth quarter report showed a step in that direction. 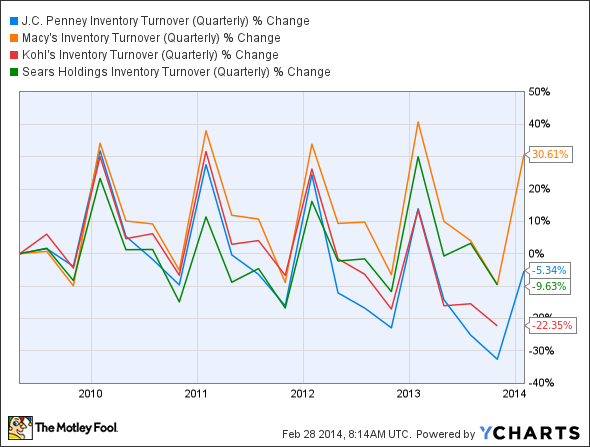 J.C. Penney has started moving back in the right direction. The inventory turnover does need some context -- Sears, for example, hasn't become a picture of health just because its inventory turnover rate improved. Sears has simply learned to stock according to demand -- or lack of demand.

However, J.C. Penney's inventory turnover rate in combination with the same-store sales improvement suggests that this is actual, organic improvement.

2014 guidance
J.C. Penney's first-quarter outlook includes comparable-store sales growth of 3-5% and an improvement on the gross margin of 30.8% of sales in last year's quarter. The company expects full-year comps in the mid-single digits and gross margin to "increase significantly" in comparison with 2012's 31.3% of sales.

The first-quarter comps projection seems overly optimistic unless it's backed by further markdowns that allow the retailer to move more inventory. However, the full-year comps estimate could prove accurate if there's not a customer drop-off once the renovations are complete.

Foolish final thoughts
J.C. Penney has begun to recover from the losses it suffered under Ron Johnson. The future will tell whether the company can maintain its growth once customers adapt to the return of popular private brands and J.C. Penney's frequent promotional offers.