Anika (NASDAQ:ANIK) jumped by a third following the FDA's approval of Monovisc, its single injection treatment for osteoarthritis knee pain. The approval concludes a three year process that began when the FDA voted against approving the therapy in 2010.

The approval clears the way for Anika's partner, Johnson & Johnson's (NYSE:JNJ) DePuy Mitek to begin selling the drug in the U.S. this spring. That will undoubtedly boost Anika's revenue, but whether Monovisc wins enough scale to justify the recent jump in share price remains to be seen. 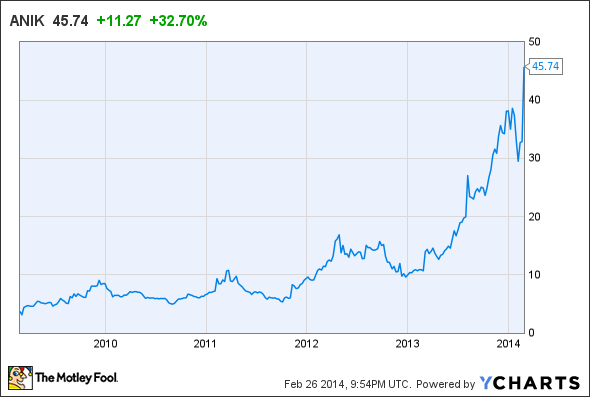 Treating knee pain is a growth market
A longer living and more active population is increasing the incidence of osteoarthritis, a form of arthritis caused by deteriorating cartilage in joints. That cartilage deterioration means patients experience pain from bones rubbing against one another even when doing the simplest things, like bending or walking. Anika estimates that more than 5% of the global population suffers from osteoarthritis of the knee, including 10 million people in the United States alone.

Justifying the jump
The 33% share surge following the FDA's approval added about $150 million in market cap to Anika. That puts a lot of pressure on Monovisc to justify the higher premium.

In 2013, Anika's sales totaled $75 million. That means investors are paying more than eight times sales at current share prices. While that valuation appears heady, it's not completely beyond reason. Biotechs are typically awarded a premium based on new drugs and pipelines. Assuming that Monovisc adds $30 million a year in revenue makes valuation a little less scary. Toss in a pipeline premium for Cingal, Anika's third generation osteoarthritis of the knee treatment that's in phase 3 trials, and valuation gets even better -- at a price. The Cingal study spiked Anika's R&D budget by more than 50% in the fourth quarter versus a year ago.

Fortunately, much of that spending increase is being offset by cost-cutting. Lower SG&A expenses helped Anika's total operating expenses drop to $42.5 million in 2013, down from from $51.6 million in 2012. Overall lower operating costs and rising sales for Orthovisc are translating into a bigger bottom line. Anika earned $20.6 million during 2013, far more than the $11.7 million it posted in 2012. That growth helped the company finish the 2013 with $63 million in cash, or nearly $5 per share, up from $44 million in December.

Fool-worthy final thoughts
Anika has an advantage over many small biotech peers. It already has sales and net income. Anika is also working with a very well established, and deep-pocketed marketing partner in Johnson.

Johnson forked over $15 million up front for the right to have DePuy Mitek sell Monovisc in the states, and will pay another $5 million milestone payment once the first sale is made in March. So, Johnson is confident it can win scripts for the new drug.

However, how many scripts they win remains a big question, suggesting that Fools should keep a close eye on second quarter results to see how quickly revenue ramps. If Monovisc captures market share, then valuation may not be as lofty as it appears, especially considering the growing cash and Cingal's potential. Regardless, Anika is an interesting and speculative investment that Fools should approach cautiously.