Even before Best Buy (NYSE:BBY) reported earnings last week, investors knew that they were in for yet another year-over-year EPS decline. After all, in mid-January, Best Buy gave investors a sharp reality check, announcing that comparable-store sales had declined during the holiday season.

At that time, Best Buy's management projected that the company's fourth-quarter operating margin would decline by 175 to 185 basis points. When Best Buy finally closed the books on Q4, the damage was not quite as bad as originally feared. This allowed Best Buy to "beat" the lowered analyst estimates by more than 20%.

Best Buy CEO Hubert Joly did a good job of getting out ahead of weak industry trends by proactively cutting costs. This dramatically softened the dual blow of stagnant sales and severe price competition in the electronics industry. However, his ambitions of restoring Best Buy to its former glory seem as unrealistic as ever.

Return to reality
In late 2012, Best Buy stock crashed to the $11 level due to overblown fears that Amazon.com would steal all of its business due to the trend of "showrooming." As Best Buy lowered its cost structure and implemented new initiatives to improve store productivity in 2013, these fears receded. The stock zoomed higher, nearly quadrupling by early November. 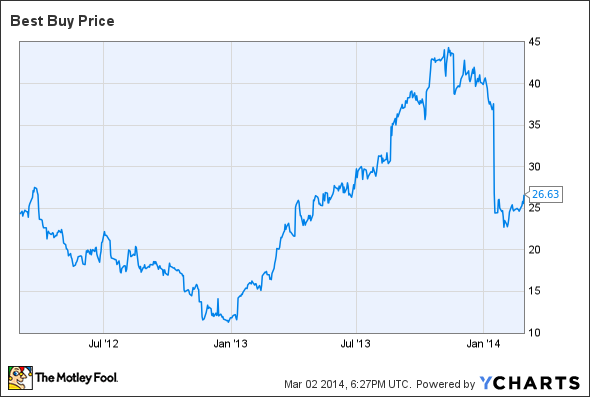 Just as Best Buy's plunge in 2012 seemed overdone, however, the 2013 rally seemed to vastly overestimate Best Buy's opportunities relative to its risks. Best Buy generates a disproportionate amount of its full-year earnings during the busy holiday quarter. With holiday-season price competition ratcheting up each year, it's becoming harder and harder for Best Buy to earn big holiday-quarter profits.

A new golden age?
On the one hand, Hubert Joly's "Renew Blue" cost-cutting initiative seems prescient today, as it put Best Buy in a position where it could weather the storm of price competition last quarter. On the other hand, it's disturbing that after eliminating $765 million in annualized costs, Best Buy still experienced a nearly 20% drop in adjusted EPS last year.

Best Buy raised its total cost-cutting goal to $1 billion last week. Even with those additional savings, analysts still expect the company to earn substantially less money this year than it did two years ago, before those cost cuts went into effect. 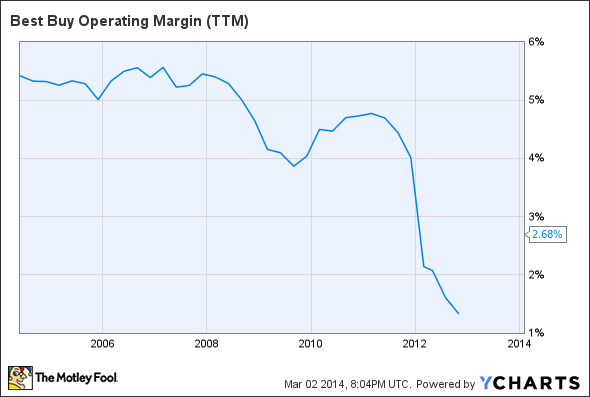 Count me as a skeptic on this front. Best Buy will soon run out of room for cost-cutting. To get anywhere near a 5% full-year operating margin, Best Buy will need to reignite revenue growth. To their credit, Best Buy executives recognize that they need to become much more successful in e-commerce to do this -- holding in-store sales flat would be a victory in itself.

Unfortunately, it's a long shot for Best Buy to be seen as the go-to place for buying electronics online. Amazon has already solidified itself in the minds of most consumers as the first stop for online shopping.

Additionally, Amazon Prime has a large and growing subscriber base, and its two-day delivery exceeds Best Buy's free shipping speed by a wide margin. (Best Buy's countermeasure is "buy online, pick-up in store," but many people prefer the convenience of delivery, especially for bulky big-ticket items.)

The risk of Best Buy's sales collapsing in the near future due to "showrooming" seems remote. However, it seems equally unlikely that Best Buy will come charging back with strong revenue growth.

A mixed bag
While I'm skeptical that Best Buy will be able to hit its long-term operating margin target, Best Buy stock looks a whole lot more attractive today than it did a few months ago. If the company's operating margin recovers to just 4%, that would drive a nearly 50% improvement in earnings.

This level of recovery seems plausible based on cost cuts and improving industry fundamentals alone. In other words, it would not require significant market share gains by Best Buy. That said, in light of the continuing threats to Best Buy from Amazon and other mass retailers, I will remain on the sidelines unless a wider margin of safety opens up.