Shares of Swift Energy Company (NYSE:SBOW) plunged last week. At one point the stock was down 26%. Is this an irresistible sale for the Eagle Ford Shale focused driller or should investors stay away?

One of the reasons for this is because the company's strategic focus right now is to improve its balance sheet and returns, as opposed to growing at all costs. To that end the company is looking to sell all, or at least a part of its Central Louisiana assets as well as find a joint venture partner for its Fasken natural gas assets in South Texas. Those sales, along with operating cash flow and its available bank line, will help the company fund its $300-$350 million capital program.

While that guidance didn't sit well with investors, it isn't likely what fueled the sell-off. The company noted that the wells drilled in its Artesia area demonstrated a significant difference in the reservoir fluid types (ie. Oil and condensate) from those that were drilled just a short distance away. Because of this, the wells just didn't contain as much liquids volumes as previously thought. As the following slide shows, the estimated ultimate recovery of oil and condensate from these wells was 34% less than the company's model previously assumed. 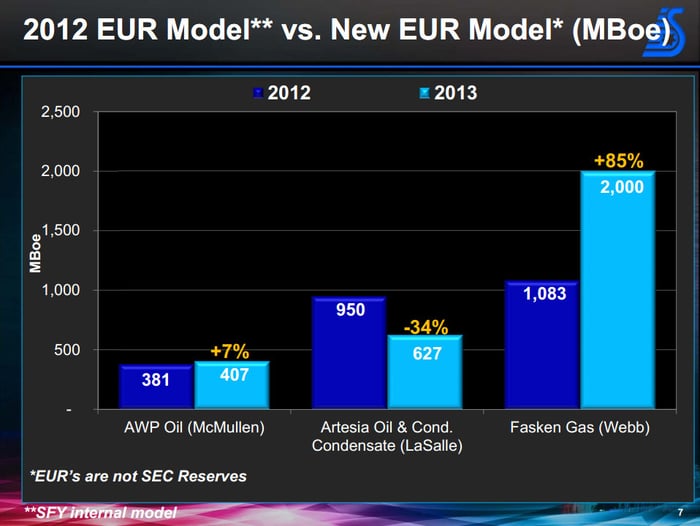 The fact that there isn't as much oil here as through forced the company to take a $74 million pre-tax write down on its proved reserves for its Artesia Eagle Ford position.

What investors didn't like is that the Eagle Ford Shale isn't fueling high-margin, liquids-rich production growth for Swift Energy as it is for other companies targeting the play. Penn Virginia Corporation (NYSE: PVA), for example, is really seeing oil growth fueled from its position in the Eagle Ford Shale. The company sees its oil production growing 66%-78% next year alone. On top of that Penn Virginia has a drilling inventory of high return oil wells that should last it at least the next decade. Because of that, investors looking for oil fueled growth simply have better options.

What went right?
That said, the quarter wasn't a total loss. The company's Eagle Ford gas position in Fasken is performing extremely well. The only problem is that it's natural gas, when investors today want oil. However, the company did note on its conference call that these are extremely high returning wells as the company can earn an internal rate of return in excess of 100% with $4.50/Mcf natural gas. Because of this COO Bob Banks quipped on the conference call that he'd, "drill these all day long."

The company is currently seeking a joint venture partner for these natural gas rich acres. It sees the potential for the acreage to hold strategic value for a producer looking to position for LNG exports. On the conference call company President Bruce Vincent noted that,

There are some very strategic players now that are looking for gas principally for LNG markets as you are aware. So some of them want to go slow, but some of them just want to come in and start taking position and start making money. This is the kind of asset that can do that.

Once the company is able to secure that partner as well as close the sale process for its assets in Central Louisiana, investors will have a better idea of where the company is heading in the future.

Investor takeaway
While the company noted that it's looking for a balanced portfolio of hydrocarbons in the future, its position is too heavily weighted in natural gas for a lot of investors. It's just not in the best position in the Eagle Ford Shale to be the oil growth company that many investors today are seeking. That doesn't mean that the recent plunge in its stock prices doesn't make the company an interesting buy. However, there are so many others, like Penn Virginia, that are growing oil production in the Eagle Ford that it's tough to get excited about Swift Energy right now.