victor liang
(vliang86)
Author Bio
Victor is a co-founder of IntelligentStocks.com, a stock recommendation service that is dedicated to helping investors outperform the S&P 500. He likes to invest in companies that have great growth potential, economic prospects and management teams. You can following him on Twitter at @IntStocks.

Between Coach's (NYSE:TPR) IPO in October 2000 and its peak in March 2012, the stock had a total gain of 3,000%, while the S&P 500 was relatively flat (due to two major recessions during the period). However, the stock has declined 36% between its peak in March 2012 and February 2014, while Michael Kors (NYSE:CPRI)—its biggest competitor in the U.S.—overtook Coach in market cap and had a total gain of 114% in the same period (see chart below). 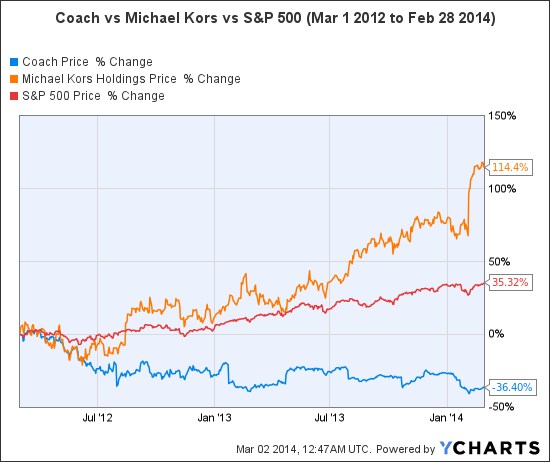 At this point, you may be wondering whether Coach is in a declining stage or is an undervalued stock that will eventually recover. Another alternative is to sell Coach and buy Michael Kors shares since the company is experiencing rapid growth. But which is the right move?

Coach's Brand and Current Economic Trend
First of all, the luxury handbag and accessories industry is highly competitive, since barriers to entry are fairly low. Companies compete with each other in terms of brand, pricing, as well as functions and designs of handbags and accessories, talent, material, locations, and customer service. Coach became one of the top luxury handbag makers in North America because it focused on making great handbags and accessories that were affordable for middle-to-upper class consumers. While its brand is not as prestigious as other top European brands such as Louis Vuitton, Gucci and Prada, consumers are attracted to Coach because of its product designs, quality, brand and affordability.

However, Coach's business model and brand are not without flaws. If a company—such as Michael Kors—can become a more popular brand than Coach and adopts a similar business model that focuses on making great handbags, apparel and accessories for mass consumers, Coach will likely experience declining sales, disappointing growth and loss in market share. This is already the case, as shown in Coach's latest quarterly report ended on Dec. 28 2013. Coach's total North American sales decreased 9% while its total international sales increased 2%. China's sales contributed the most to Coach's international growth as it increased about 25%.

In comparison, Michael Kors had much larger growth during the same period. According to the company's latest quarterly report, its total revenue increased by 59% while its retail net sales increased by 51.3%. The company's revenue growth was largely driven by an increase in comparable store sales and new store openings.

Michael Kors' Uprising and Economic Trend
Two years ago, I discovered that Michael Kors was a great company to invest in when I noticed that more consumers were buying Michael Kors accessories and handbags. I asked my female colleagues for their opinions on Michael Kors compared to Coach. Surprisingly, almost all of them confirmed that they preferred Michael Kors' handbags and accessories even though Coach was well-established and was very popular in the consumer market.

Another aspect that indicates Michael Kors to be a more popular brand is its retail traffic. In the area where I live, I noticed that Michael Kors stores are getting more traffic while Coach stores are getting less. Coach's management also confirmed this trend in its latest earnings release : "We continued to be disappointed by our performance in North America, which was affected by substantially lower traffic in our stores and by our decision to limit access to our e-factory flash sales site."

The third thing that makes Michael Kors a better company to invest in—despite its high valuation—is its Chief Creative Officer, Michael Kors, who is one of the best fashion designers in the world. His collections (bearing his name), Michael Kors and MICHAEL Michael Kors, are very popular in the luxury brand market. On the other hand, Coach's new Executive Creative Director, Stuart Vevers' creativity and designs are yet to be seen. He will be launching his first collection in September, which might help Coach revive its sales growth in North America if it becomes a huge success. Otherwise, Coach's total revenue growth will continue to rely on its international growth—particularly China.

The Bottom Line
Michael Kors (the company) should be a better stock to invest in if you were to choose between Coach or Michael Kors because its brand is becoming increasingly popular, the company is growing rapidly in North America and in the international market, and Michael Kors is one of the best fashion designers in the world. In comparison, Coach has become a dividend stock that has low or negative sales growth. Its stock might recover if management can introduce better collections that would increase the company's brand and its North American sales.