U.S. natural gas drillers are chomping at the bit to get domestic natural gas into foreign markets where gas prices are higher. However, not everyone is so pleased with that idea, including giant industrial players like Nucor (NYSE:NUE), Alcoa (NYSE:AA), Dow Chemical (NYSE:DOW), and Southern Company (NYSE:SO).

Money, money, money
The U.S. natural gas market is largely closed, meaning that what gets drilled here mostly stays here. As hydraulic fracturing and horizontal drilling increased the amount of natural gas, supply quickly swamped demand and domestic gas prices plummeted to record lows. Prices got so low, in fact, that it was cheaper to generate electricity with natural gas than with coal—historically the lowest price fuel source.

This is the exact opposite of, basically, the rest of the world. For example, Germany is opening new coal plants to provide over 5,000 megawatts of base load power that will be lost as the country moves forward with a plan to shutter its nuclear plants. Counter to nuclear, only about 1,000 megawatts of older coal-fired power is being shuttered. Coal is getting the nod because it's cheaper than gas. 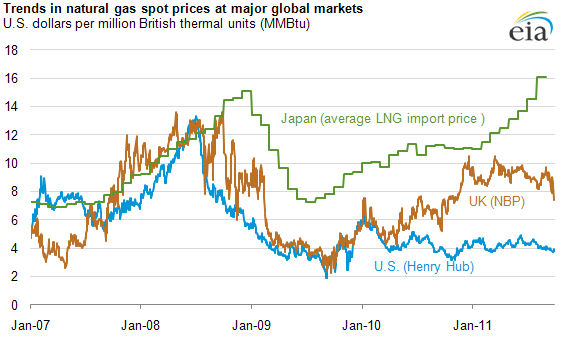 According to Southern, however, low domestic gas prices are bringing more jobs to the United States. CEO Thomas Fanning recently noted that, "We are seeing more foreign companies consolidating or adding new facilities in the southeast." Something he attributed directly to low energy prices. Southern itself is a big user of natural gas, ranking in the top three consumers in the country.

Fanning went on to say that, "...if we continue on the right kind of national energy policy, we can provide America with unassailable advantage in manufacturing, growing jobs, growing personal incomes." He means that the United States should limit gas exports, a sentiment echoed by steel giant Nucor.

Let us keep the edge
In a recent interview, Jennifer Diggins, director of public affairs at Nucor, noted that low gas prices have, "...helped us continue to build and expand throughout this very difficult economic time." She pointed to the $750 million the company spent to open a mill in Louisiana. "We would not have ever been able to make an investment like that if the price of natural gas had stayed where it was six or seven years ago."

Dow Chemical is another company looking to protect this fuel advantage. Commenting on the government's approval of a liquified natural gas export terminal, Dow Chemical's CEO Andrew Liveris said, "Companies from around the world are rushing to invest in the United States to take advantage of affordable natural gas, helping to grow our economy and create jobs... The most recent data makes clear that sending large volumes of American natural gas abroad will raise consumer energy prices, discourage manufacturing investment, and impede economic growth and job creation."

Of course, like Southern, both Nucor and Dow Chemical are big users of natural gas. In fact, Nucor, Dow Chemical, and fellow natural gas user Alcoa, among others, have teamed up to create America's Energy Advantage. The group advocates against the export of natural gas and estimates that exporting natural gas could drive the domestic price up as much as 50%.

In a letter to the U.S. Department of Energy regarding natural gas exporting, Alcoa noted that, "...throughout our production chain, the cost of energy has a substantial impact on our US manufacturing locations' ability to compete in global markets." Imagine if its energy costs went up by 50%! That's the same boat that all heavy natural gas users would be in and underscores why this quartet of companies want to keep gas exports in check.

A losing proposition
To their credit, none of the above companies would ban gas exports. They know that idea would be dead on arrival. However, they make clear that they favor a measured approach. That said, as an investor, you need to keep a close eye on natural gas exports if you own big users like Southern, Alcoa, Nucor, and Dow. If their energy costs were to jump by 50%, profits will clearly be harder to come by.

Here's three companies set to benefit from this very trend...