Will 2014 be the year of the adjustable-rate mortgage, when interest rates rise and ARMs make a comeback?

While that remains to be seen, there's no question that an ARM can be cheaper than a 30-year fixed-rate mortgage based on lower initial interest rates and points.

The initial fixed-rate period is usually three, five, seven or 10 years, after which the loan customarily adjusts annually. That's why these loans are known as 3/1, 5/1, 7/1 and 10/1 ARMs. 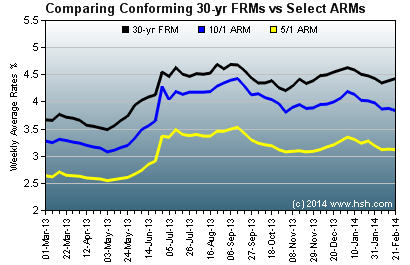 What are the savings?
The catch is that the savings aren't guaranteed beyond the ARM's initial fixed term. After an adjustment the savings can evaporate.

For example, the difference between the payment on a 30-year fixed-rate loan at, say, 4.48 percent and the payment for a 5/1 ARM at, say, 3.28 percent would be about $134, explained Keith Gumbinger, vice president of HSH.com. Over a five-year period, the savings would be almost $11,800 and an additional $3,500 of the loan balance would be paid off. After that, the rate could rise and those saving could disappear.

Qualify at a higher rate
Contrary to common belief, an ARM likely won't help you qualify for a significantly larger loan amount, says Neena Vlamis, president of A and N Mortgage Services in Chicago. That's because the lender needs to know you can afford the higher payment.

"When you apply for a five-year ARM, we use the caps to qualify you, so it doesn't help you qualify," Vlamis says. "The seven-year or 10-year ARM could slightly help you qualify because the rate is lower than a 30-year fixed-rate. An ARM helps you save money. It does not help you stretch your budget."

Who should get an ARM?
Still, ARMs make sense for borrowers who plan to sell their home or refinance their loan within the fixed-rate period since they involve no interest rate risk during that time, said Gumbinger.

First-time homebuyers can bank the savings to be used for other financial goals while near-retirees can use the savings to pay other debts or make catch-up retirement contributions, Gumbinger suggested.

"If the borrower is planning on staying in the property for (only) three-to-five years, I would suggest giving them a five- or seven-year ARM," says Vlamis. The seven-year is a bit safer in case they don't move in the first five years," she says.

Questions to ask
If you're curious about an ARM, you should ask some important questions. Here's a list from Fred Arnold, a loan consultant at American Family Funding in Santa Clarita, Calif.

Once you've collected this information, you can do a little math and use a mortgage calculator to figure out the best-case, worst-case and likeliest-case monthly payments at the first adjustment, Gumbinger said.

"Calculate the payment using the remaining loan balance after the initial term, the new interest rate and the remaining term and see how much -- or how little -- financial pain these potential changes will cause," he said.

Is an ARM smart?
Arnold says borrowers are looking "very seriously" at ARMs today as interest rates tick up.

"The spread isn't that much, the borrower has to qualify based on an interest rate that's comparable to the (30-year) fixed rate and, with interest rates this low and most of those loans fixed for (only) five or seven years, the risk is all with the borrower," he says.

One possible exception might be a jumbo ARM, intended for sophisticated borrowers in high-cost housing markets. With that type of loan, even a small rate discount can offer a big benefit.

In all, ARMs still maintain a small percentage of the market, although they have increased some during the first couple months of 2014.

The original article: 2014: The Year of the ARM? appeared on HSH.com

Additional articles on mortgages can be found on HSH.com:

Refinance on the dips

4 factors will influence housing inventory in 2014