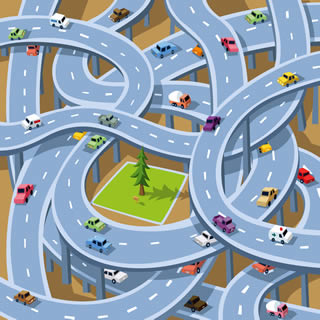 The self-driving car is already in motion, offering motorists the chance to sit back, relax and let a computer take the wheel. But insurance companies say that it won't put an end to auto insurance.

"There's a good chance autonomous cars will be on the road in the next five to 10 years," says Kishore Ponnavolu, the head of MetLife's auto and home subsidiary. "But they will not eliminate the risk of automobile ownership."

In fact, quite the opposite.

While the frequency of accidents may decline, the cost of crackups will be more severe, predicts Carol Csanda, who leads the "innovation project" for State Farm, the nation's largest auto insurer.

The rationale: Cars loaded with the high-tech parts needed for self-driving will cost more, so the dollar amount to replace this new technology, if damaged, will be far greater.

"The higher costs associated with driverless cars will also be reflected in other forms of insurance that will still be unavoidable," says spokesperson Loretta Worters of the Insurance Information Institute, which represents the insurance industry. In other words, you'll probably still want comprehensive coverage, which pays for theft, flood, fire and other damage occurs when the car isn't in motion.

And it gets worse. Not only do you need to keep all your regular coverage, you may need new forms of coverage.

"In fact, new kinds of driverless-car insurance, such as cyber coverage to protect vital computer parts and software, may become part of the yearly insurance contract," says Csanda, adding that car "recalls may no longer involve going to the dealership. Instead they'll be downloads to your car's computer."

Ford goes to bat
As cars get smarter, insurance will have to become smarter too, which is why State Farm has teamed up with Ford and the University of Michigan to get "a window inside the driverless car," Csanda says.

The university and the car maker will take the lead on the mechanical development of the new Ford Fusion Hybrid, which will come equipped with four rooftop 360-degree infrared sensors that scan the surroundings millions of times a second and report back to a 3-D map. This is comparable to the way a bat uses its sensors to navigate at night.

State Farm will "provide insight from many years of claims experience and our knowledge of driver behavior and know-how to help make the vehicle safe," says Csanda.

Battle of the 'black box'
As advanced technology infiltrates a car, the most important piece of the puzzle will be the "black box" positioned under the steering wheel that monitors the driver's activity. Almost all new cars have them, and most simply record what happens prior to and during a crash. But this monitor, and who has access to it, will become even more important in the future.

It will be able to tell whether the driver or the car's computer was in control of the vehicle at the time of a crash, something insurance companies, car makers, law enforcement and the National Highway Traffic Safety Administration (NHTSA) will want to know. Another possible argument after a crash: How long did it take the computer to transition control of the car to or from the driver, and what happened in those few, possibly fatal, seconds.

A future black box would also monitor the "health" of the computer that drives the autonomous car. If an owner fails to maintain it or repair a known malfunction, he or she could be held responsible for a computer failure.

Trying to keep pace
Driverless technology could outpace the roads it will travel on and the laws that will govern it, as well as public acceptance. A recent survey by Chubb Corp. showed that 70 percent of Americans preferred driving themselves, only 4 percent wanted a driverless car and just 22 percent would even let their families get into an autonomous vehicle.

But some of the new technology for driverless cars has already been accepted by the public. The Chubb survey shows that most drivers want a warning system that alerts drivers when they cross lanes, automatic breaking systems and cruise control, while a third would like self-parking.

It doesn't come cheap
A big problem: price. While driverless cars could be on the road by 2020, they won't come cheap. Many of the early models will come from high-end car makers such as Mercedes-Benz and Lexus, as well as newcomers like Tesla and Google.

This means that drivers at the lower end of the car-buying spectrum, who now keep their cars an average of 11 years, may opt to keep the old heap running even longer, or settle for a lower priced model that is only self-driven.

And then there's this: a deteriorating highway system with inconsistent or missing road signs and a 50-state regulatory system where the rules are often confusing and contradictory.

Only four states have even begun to address the issues that pertain to driverless cars.

One of those issues is the traditional "driving test" given to those who want to obtain a driver's license, as well as seniors who might have to requalify. Future testing would have to examine a driver's ability to program the car's high-tech devices, such as the autonomous navigator.

As for insurers, they have no data yet to tell them how safe a particular make or model is until it's actually on the road. How will they set accurate car insurance rates?

Convoys and 'platooning'
But there are advantages that an autonomous vehicle can offer. For instance, the computer that drives your car can also talk to other computers. Together they can negotiate the least time-consuming route to a destination as well as link up with other cars traveling in the same direction.

Computer technology would allow these cars to "platoon," or travel almost bumper-to-bumper at the same speed, reducing the current car lengths required for safety and the amount of road space needed.

Cars traveling this way could make nervous wrecks out of insurers and motorists -- until they are used to it. But it's also the road to the future.

Not going anywhere
Despite the vehicle costs, the questions and the frayed nerves, we might save money, "since 95 percent of all crashes are now due to driver error," says Worters.

"Groups that might be most affected include teenagers, seniors who now either cannot or should not drive, and some disabled people," she says. Driverless cars might also reduce the number of convictions for speeding and DUIs.

But one thing is for sure about insurers, says Csanda. "We don't believe we will be obsolete."

Additional car insurance articles can be found on Insure.com.

Car insurance discounts in every state

12 ways to save money on car insurance