Please ensure Javascript is enabled for purposes of website accessibility
Free Article Join Over 1 Million Premium Members And Get More In-Depth Stock Guidance and Research
By Matthew DiLallo - Mar 26, 2014 at 11:05AM

Marathon Oil recently updated investors on the three key efforts for a successful 2014.

Marathon Oil ( MRO -1.86% ) sees three key priorities as critical to fueling returns for its investors in 2014. Topping the list is boosting its rig count in its three core shale plays. The company also aims to ramp up its stock buyback program and to complete the sale of its North Sea business, which would provide the capital to fuel the other two priorities. Let's look at how the company is faring in meeting these crucial goals.

Ramping up the rig count
Marathon's 2014 plan aimed to ramp up its North American onshore rig count from 22 to 28. The company has met that key goal, which has it on pace to grow production by 30% from these plays this year.

The company is operating 18 rigs in the Eagle Ford shale. The focus on the Eagle Ford comes primarily because Marathon Oil is enjoying a 70% internal rate of return by drilling wells in the shale. On top of that, the company's large position in the play gives it an enormous total resource potential upward of 1.7 billion barrels of oil equivalent. For perspective, that's twice the resource potential the company sees in the Bakken shale.

The other area receiving more attention this year is the company's Oklahoma Resource Basins, where Marathon has four rigs in operation. While the play delivers a lower 40% internal rate of return, the overall resource potential is substantial at 1.2 billion barrels of oil equivalent. Furthermore, these plays are simply stacked with potential oil and gas producing zones, as the following slide shows. 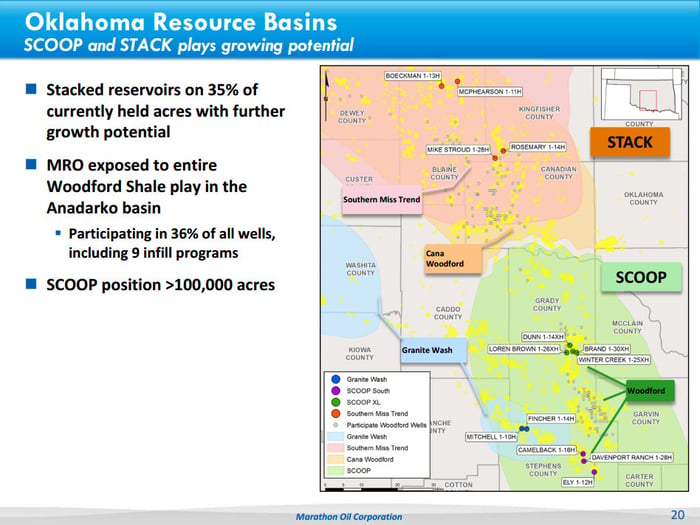 As the above slide details, Marathon Oil's acreage is across much of the SCOOP and STACK plays of Oklahoma. These plays are drawing the attention of a number of industry participants, including Devon Energy ( DVN 0.43% ) and Continental Resources ( CLR -1.98% ). Devon Energy is particularly interested in the Cana Woodford shale, while Continental Resources is spending a quarter of its 2014 capital budget in the SCOOP play. While the returns aren't yet as high as some other shales, the resource potential from the layered nature of these plays is appealing to producers.

Returning cash to shareholders
Marathon Oil is also returning some excess cash to investors. The company has been selling international assets and using the resulting cash to buy back stock. Marathon recently completed the sale of its Angola Block 31, which enabled it to complete the second phase of a $1 billion stock buyback.

Marathon Oil isn't done, either. The company actually added another $500 million to its stock repurchase program and now has $1.5 billion remaining on its repurchase authorization. While there is a case to be made for reinvesting all of its cash to grow production, buying back the stock, which it views as cheap, remains a good use of that capital.

The key to the whole effort
In order to fund the company's shale-focused drilling program and its stock buybacks, Marathon Oil is marketing North Sea businesses in the U.K. and Norway. The company sees exiting this area as a way to simplify and concentrate its portfolio.

Marathon Oil here is slowly following in the footsteps of Devon Energy, which sold off its entire international business outside of Canada in order to focus on shale-fueled growth. Those sales enabled Devon to reduce its net share count by more than 20% over the past decade. Marathon's hope is to replicate the success Devon has enjoyed by simplifying its operations and focusing on the North American energy boom.

Investor takeaway
Marathon Oil is moving forward with a more focused strategy to fuel returns for investors. By simplifying its portfolio by selling off its North Sea assets, the company will free up cash to fuel its faster-growing shale business in the U.S. and to buy back its cheap stock. That combination is a solid recipe for success.

What Stock Market Sell-Off? These Stocks Are Red Hot