Please ensure Javascript is enabled for purposes of website accessibility
Free Article Join Over 1 Million Premium Members And Get More In-Depth Stock Guidance and Research
By Leo Sun - Mar 27, 2014 at 9:33AM

Will Black Widow and her Marvel sisters crush Wonder Woman long before she arrives in 2016?

Girl power is big business in movies these days. The first two films of The Hunger Games have grossed $1.56 billion, and Divergent has earned $62 million over the first few days of its release. Lions Gate Entertainment ( LGF-A 2.81% ), which distributed both films, seems to understand the magic formula of bringing popular young adult novels with strong female leads to the silver screen.

Now Disney ( DIS 1.68% )/Marvel and Time Warner ( TWX )/DC are itching to replicate that success with more female characters in The Avengers: Age of Ultron and Man of Steel 2, which will finally introduce Wonder Woman.

Scarlett Johansson, who plays Marvel's Black Widow, recently expressed strong interest in a solo film of her character. She also hinted that audiences will "see some pretty strong female characters" in the second Avengers film, which is scheduled to hit theaters in April 2015.

Johansson's statement has led to speculation that Elizabeth Olsen, who will play Scarlet Witch in the upcoming film, might not be the only female Marvel character slated to appear. Some likely candidates include Emily VanCamp (Agent 13), Cobie Smulders (Maria Hill), Lady Sif (Jaimie Alexander), and Zoe Saldana (Gamora). Could cranking up the girl power voltage steal Wonder Woman's thunder long before she arrives in DC's Man of Steel 2, which has now been postponed until 2016? 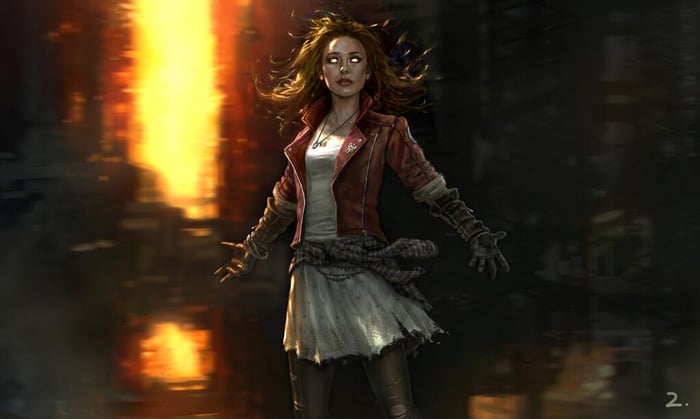 Concept art for Scarlet Witch, who will be played by Elizabeth Olsen. (Source: Marvel)

Warner Bros. has signed Gal Gadot to three films as Wonder Woman -- which are presumed to be Man of Steel 2, a solo Wonder Woman film, and Justice League. She also revealed that she will only be paid $300,000 for the first film, which pales in comparison to Scarlett Johansson's $20 million paycheck for The Avengers.

Will Gadot prove to be a better investment for DC than Johansson's Black Widow? More importantly, will they both help solo films about female comic book characters finally gain the respect that they deserve?

Only one film, Elektra, recovered its production costs. However, it was still a box office bomb after marketing costs were factored in. In Catwoman, the screenwriters inexplicably created a brand new version of the character named Patience Phillips in place of Selina Kyle.

Should female writers write female characters?
All of these failed films were unsure about how to portray their lead characters due to the source material. Many comic book writers have a tendency to write two-dimensional female characters while the artists illustrate them in voluptuous three-dimensional detail. A vast majority of comic book writers and artists are men, as were all the writers and directors of the four aforementioned films.

By comparison, the first Hunger Games film was co-written by series author Suzanne Collins, while Divergent was co-written by Vanessa Taylor, who previously wrote episodes of Alias and Game of Thrones. Therefore, Marvel and DC should realize that female writers or directors could help films like Black Widow and Wonder Woman win over a female audience.

However, DC and Marvel have still stuck with male writers and directors to helm their blockbuster franchises. They presumably don't want to alienate their main demographic of young men in an effort to win over more female viewers. Zack Snyder, the director of 300, Watchmen, Sucker Punch, and Man of Steel, is the master of catering to that young male audience -- his female characters are simply live-action versions of their pencilled and inked counterparts.

Therein lies the problem with DC. After watching the joyless affair that was Man of Steel, I have serious doubts that Zack Snyder can make Gadot's Wonder Woman as popular or likable as Johansson's Black Widow.

My final take
I strongly believe that female writers and directors should be given a chance to make these upcoming solo films for Black Widow and Wonder Woman. However, in the absence of that, I'd have to say that Joss Whedon and Marvel Studios president Kevin Feige have a much better chance at cashing in on the current "girl power" trend in cinema.

What do you think, fellow comic book movie fans? Is Marvel already too far ahead when it comes to portrayals of female superheroes? Let me know in the comments section below!