The differences between Facebook's (NASDAQ:FB) photo-sharing Instagram and microblogging Twitter (NYSE:TWTR) are becoming less distinctive, including the size of their user bases. While it's likely the two niche platforms will go on for years as separate, successful networks, Instagram's growing size could hamper Twitter's growth opportunities. And considering Twitter's lofty valuation, which prices in robust growth in the coming years, this could be a concern for investors.

Instagram's wild growth
When Facebook acquired Instagram for $1 billion, there were doubts about whether Facebook overpaid. Looking back, however, it's clear that Facebook CEO Mark Zuckerberg received a bargain deal for the company. When Facebook announced it would be acquiring Instagram in April 2012, the service only had 30 million monthly active users, or MAUs, and no revenue. Today, Instagram is 200 million strong and Facebook is monetizing the photo-sharing service with ads. Though Facebook hasn't discussed numbers on Instagram's advertising progress, Zuckerberg has said before it launched ads that it was "a really big opportunity."

But is Instagram's success shrinking Twitter's growth opportunity in photos and videos? Instagram is no longer a minor player in the social space. In fact, Instagram looks poised to soon become a larger social platform than Twitter. At 200 million MAUs today, Instagram added 50 million users in the past six months. Twitter grew slower in a similar time span, adding 23 MAUs between the second quarter of 2013 and the fourth to reach 241 MAUs. Instagram's faster growth positions it to actually surpass Twitter's monthly active users.

And it's clear Twitter and Instagram have overlapping growth plans. Twitter just beefed up its photo sharing capabilities this week when it updated its iOS app to allow members to tag up to 10 people in a photo and share up to four photos at a time.

Twitter needs growth
It's unfortunate it has taken Twitter so long to introduce photo tagging that doesn't affect character count. Limited to just 140 characters, it was previously impossible to tag very many users. Better photo tagging will both incentivize more photo uploading and make those photos more social and engaging. More importantly, it will help Twitter tap into the same growth market Instagram is benefiting from. 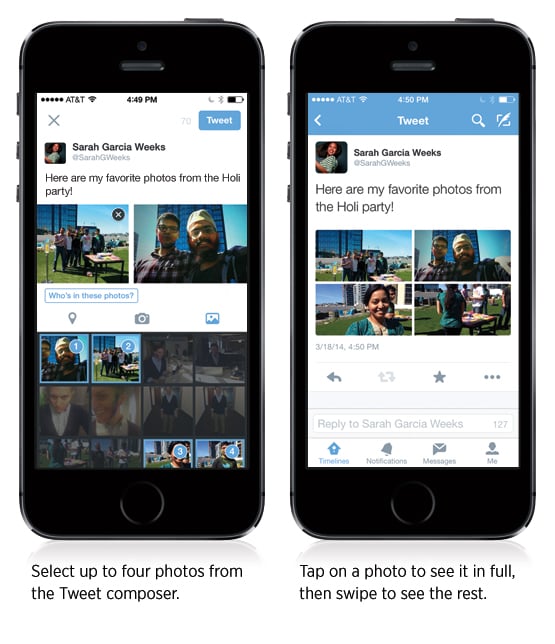 While the updated feature will undoubtedly help Twitter compete with other popular photo-sharing apps, Instagram's lead in photo and video sharing is discouraging for Twitter investors. Given Instagram's impressive gain of 50 million MAUs in the past six months, it's clear photo sharing is a growth market. And if any social platform stock needs to be effectively capitalizing on a growth market, it's Twitter. Not only is the company still reporting losses, but it has a lofty price-to-sales ratio of 13; living up to market expectations won't be easy.

While investors shouldn't fear that Instagram could become an alternative platform to Twitter, Instagram's growing size relative to Twitter's should be a trend investors keep an eye on. Every day Instagram grows larger relative to Twitter is another day Twitter's opportunity in photos and videos shrinks. With so many forward-looking assumptions priced into the stock, this shrinking growth opportunity is a reason investors considering Twitter stock may want to remain on the sidelines.