As winter thaws into spring, it's also thawing out the price of gasoline. Over the past two weeks, gas prices are up about $0.05 nationally to an average of $3.56. That's at the lower end of the peak price forecast that AAA saw just last month, with $3.75 at the upper end of its forecast for this spring.

While the Energy Information Agency's outlook for 2014 forecasted that the price of gas would average $3.43 per gallon this year, that doesn't mean we aren't going to see gas price spikes. It also doesn't mean we should sit by idly as money goes out of our pockets and into the coffers of energy companies. So, even though the forecast as seen below suggests prices will eventually take a breather, we should be prepared for the forecast to fail. 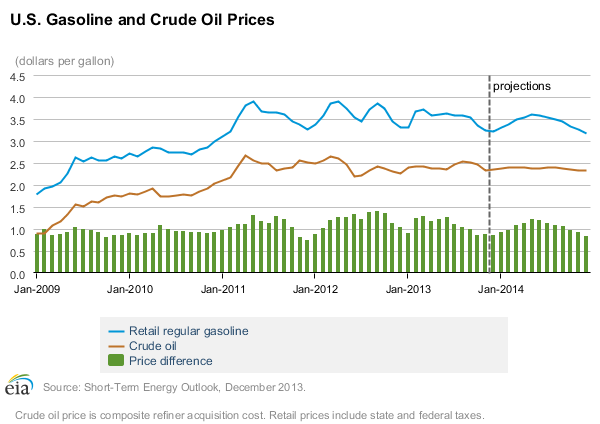 Not only that, but $3.50 per gallon for gas still takes a pretty big bite out of our budgets. So for those worrying about higher gas prices, or just tired of paying so much for it, I have a solution that could help offset that increase, or at least help to offset some of what we pay for gasoline.

Over the past 12 months, I've spent just over $2,500 to fill up, even though my wife and I both work from home. We do travel a lot, but we still pay an awful lot of money to fill up. Needless to say, I'd like to have more of that money back in my own pocket rather than padding the profits of the energy industry.

One of the ways I've taken back some of the profits I've handed to the energy industry is to invest in it. A few years ago, I made a small $500 investment that eventually turned into shares in refining giant Phillips 66 (NYSE:PSX). This year, those shares paid me just over $25 in dividends last year, which offset about 1% of my gas purchases. On top of that, my initial investment has yielded nearly $1,000 in capital gains over the nearly two years since I picked up shares of Phillips 66. Add it up, and that small investment has, in a sense, offset more than 20% of my gas purchases last year.

One big gas dividend worth a look
Following my hedge by investing in a refiner like Phillips 66 or its rival Valero (NYSE:VLO) is a solid way to offset some of the money spent on gas. I say "some" because it would be hard for an investor to offset all of his or her gas purchases with refining dividends alone. The problem here is that the dividend yields on these stocks are rather low, as Valero, for example, just yields 1.85%, while Phillips 66's dividend yield is slightly over 2%. I do, however, have another option that would really fuel big dividends from gasoline.

Thanks to a tax loophole set up by the IRS, Northern Tier Energy (NYSE: NTI) is able to offer its investors an easier option to fill up on gas-fueled income. Northern Tier, which is structured as a MLP, owns a single refinery in St. Paul Park, Minn., as well as 164 company-operated gas stations as the following slide details. 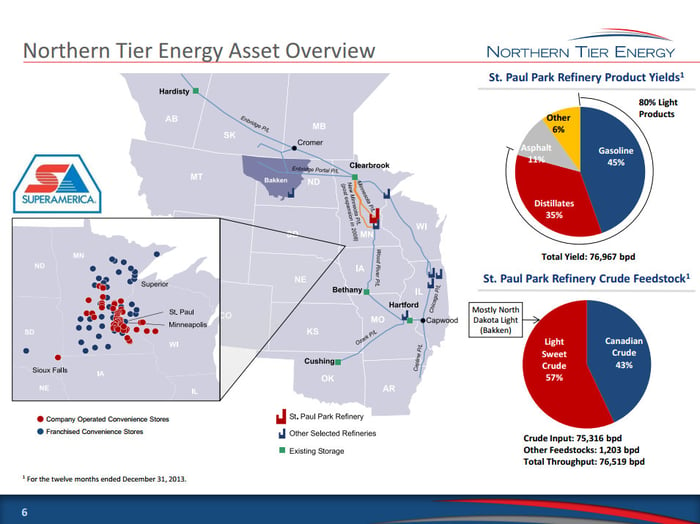 The key here isn't so much the asset map, but the fact that Northern Tier is structured as an MLP. Because of that structure, the company is required to pay out nearly all of its income to investors. If the rate of the company's last distribution holds steady, it equates to a current yield of 6.4%, which is more than three times the yield of both Phillips 66 and Valero.

Northern Tier, however, is a variable-distribution MLP, meaning its distribution rises and falls with its profits. Its distribution has been as low as $0.31 per unit to as high as $1.23 per unit over the past year. In fact, the distribution yield over the past year has averaged just over 10%. So there is the potential that Northern Tier can really offset a nice chunk of the cost of driving. For those who think gas prices are going higher, or at least the profits of refineries and convenience stores, an investment in Northern Tier Energy is a great way to profit from that bet. That's especially true when considering Northern Tier's refinery is located in proximity to cheap Bakken oil.

Investor takeaway
Dividends aren't just for those nearing retirement. Investing in a dividend stock with a specific goal in mind, such as offsetting rising gas prices, can put an investor on the pathway to eventually offsetting all of his or her expenses and maybe even retiring early. Not only is it a great goal to have, but it can also make price increases easier to swallow as those profits will come back to you via dividend checks.