Pacific Sunwear has performed better than peers Zumiez and Wet Seal, and its performance makes it a good pick in a tough environment.

The apparel industry in the U.S. is currently having a tough time as consumers keep their wallets on a tight leash. Moreover, a shortened holiday season and bad weather toward the end of the year and in January were additional headwinds. Going through this somber environment, apparel retailers like Pacific Sunwear of California (PSUN), Zumiez (ZUMZ 0.70%), and Wet Seal (NASDAQ: WTSL) posted their quarterly results in March within close succession of one another. Let's take a look at how Pacific Sunwear has performed compared to its peers.

Where Pacific Sunwear stands
Pacific Sunwear has been trying to turn around on the back of four strategic moves: showcasing distinct brand identities; becoming a leader in anticipating and recognizing fashion trends; enhancing creativity, diversifying and increasing its customer base; and building a talent pool across the country.

These strategic moves, undoubtedly, are working in Pacific's favor. The company has been going through a dream run on comparable-store sales, or comps, clocking its eighth consecutive quarter of positive comps in its fourth quarter of fiscal 2013. Comp growth was also fueled by the e-commerce channel, which grew 8% year over year in the fourth quarter, and 6% during fiscal 2013.

On the back of positive comps and new store openings, Pacific reported net sales of $218.6 million and beat consensus estimates. Its loss per share was narrower than consensus estimates and came in at $0.17 for the quarter. During the quarter, the sports and fashion retailer shuttered 17 stores, taking the total stores closed during the year to 30.

Going forward, during fiscal 2014, it plans to shutter approximately 10 to 20 stores, in line with its policy of closing underperforming stores. It expects a first-quarter loss in the range of $0.17 to $0.12 per share, and comps are expected to be in the 1% to 4% range. The momentum of the last eight quarters clearly demonstrates that the company is carving out a turnaround story, slowly but steadily.

Mr. Market is impressed so far with Pacific's performance, and shares have gained almost 39% during the last year. The company leads the pack in stock price performance, as shown in the chart below: 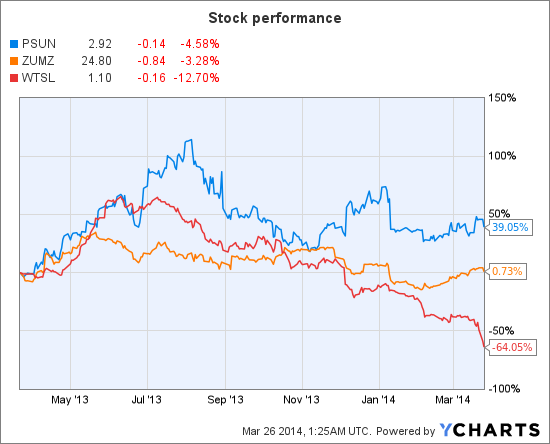 Zumiez and Wet Seal are lagging
While Pacific Sunwear is busy carving out its turnaround story, Zumiez had a lackluster quarter. Weakness in mall traffic during the holiday season, an extremely cold and snowy weather throughout the majority of the Midwest and Eastern United States were the major headwinds that resulted in a comps decline of 2.2% year over year on top of a 1% decline in the year-ago quarter. The men's, boy's, hard goods, and footwear categories wiped off entire comps growth in the juniors and accessories categories.

The highly promotional environment during the months of December and January took its toll on the company's earnings. Adjusted earnings during the fourth quarter of fiscal 2013 contracted 13.3% year over year to $0.65 per share.

Going forward Zumiez will continue to expand its footprint by opening new stores. In fiscal 2014, it plans to open 55 new stores, including up to seven stores in Canada and five stores in Europe. In addition, the investments the company has made in its omni-channel are being touted as one of its big growth drivers going forward. In addition, just like Pacific Sunwear, Zumiez is also investing in improving its sales force and operations. As a result, it has been able to improve its footprint and market share besides achieving operating margins in the neighborhood of pre-recession levels.

Wet Seal's fourth quarter was nothing short of a disaster. Its turnaround efforts were challenged by weaker holiday sales, resulting from a highly promotional environment and an extremely cold weather. The company tried to sugar-coat the results by talking about a good eight months of positive growth trajectory.

However, Wet Seal is confident that on the back of its strategic moves, it can start delivering growth again. It is relying on its focus on product innovation, disciplined inventory management practices, and targeted promotions as three growth drivers going forward.

Bottom line
Pacific Sunwear has been a better performer than its peers. The company has done well in a difficult retail environment, so investors should definitely take a close look at the stock.