Declan Fallon
(fallond)
Author Bio
I am a self-confessed Blogger, Market Technician for ActivateClients.com, and Community Director of Zignals.com. Follow me on Twitter and Stocktwits @fallondpicks

Cruise liner companies have experienced an unwelcome period in the spotlight, staring with the Costa Concordia disaster that killed 30 passengers and left two missing (presumed dead), followed by a series of cruises suffering a mix of health and/or mechanical issues, culminating in the expedition that got caught in the ice in December last year -- although the latter incident was not a large cruise liner.

Is there any beacon of light for this troubled industry?

Within the Cruise sector are three large companies: Carnival Corporation (NYSE:CCL), Royal Caribbean Cruises Ltd. (NYSE:RCL), and Norwegian Cruise Line Holdings Ltd. (NYSE:NCLH). These three compete with a number of smaller and privately owned companies, but how do they compare against each other?

What do Investors think?
Royal Caribbean is the clear top dog: Its share price made strong gains against its rivals starting from the summer of last year, when it beat on Q2 forecasts for revenues and its (then) guidance, despite a drop in bookings. This good fortune extended into Q3 as guidance was again revised upwards, on expectations of continued improvement in revenue generated per berth, heading into 2014.

Royal Caribbean investors enjoyed over a 60% return on the year, but even with this gain, it maintains the lowest P/E ratio of the three companies, offering continued value for old and new investors alike. 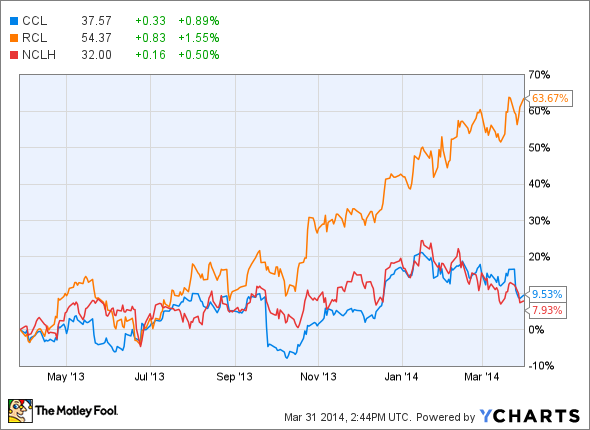 What do customers say?
According to CruiseCritic.com, Royal Caribbean had the highest user satisfaction rating in the first three months of 2014 (of 50 randomly selected reviews per month; Figure 1), but reviewer ratings had dropped from the same quarter last year. Carnival was the only liner to improve its rating, although it was an improvement from a lower standard given its prior troubles. Norwegian Cruise Line experienced the largest relative drop in customer ratings, pushing it below Carnival for the first quarter of this year despite a strong showing in 2013. However, it should be noted that Carnival, and its subsidiary, Princess Cruises, hold three of the five most liked cruises on CruiseCritic.com. Score this one for Royal Caribbean, but honorable mention goes to Carnival on its improvement.

Company factors
Carnival has done well to drive a near 50% year-over-year gain on Costa bookings, with CEO Arnold Donald noting improved trust and confidence in its core Italian market. However, the growth has come at the expense of discounting across the Carnival and Costa brands, and a 20% jump in advertising spend. As a result, Carnival is expecting a drop in revenue-per-berth for the next quarter.

In contrast, Royal Caribbean has better weathered the storm in the sector, with year-over-year increases in revenue per berth, driven by customers spending more while on board the ship. The provision of more modern ships offers a key advantage in the facilities available to passengers and the revenue opportunities open to the company. The company is projecting a 40% increase in profitability for this year, driven by better utilization of existing capacity.

In Norwegian Cruise Line's recent conference call, CEO Kevin Sheehan placed heavy emphasis on balance sheet improvements over results from operations. However, the delivery of a new ship continues a policy toward developing one of the most (if not the most) modern fleets in the business. Like its competitors, it's relying on discounting to fill capacity, but it reported the strongest growth in revenue per berth of the three companies.

Between the three companies, Norwegian Cruise Line's rollout of newer ships, with another two expected by 2017, may give it a slight edge over Royal Caribbean (also in line for four new, larger ships by 2016). Carnival's focus remains recovering its brand name.

Outlook
Royal Caribbean has led from the front for the past year on the balance of high customer satisfaction, modern ships, and healthy financials. Carnival is still pulling itself off the floor, but as the dominant player in the sector, with a Market Cap greater than Royal Caribbean and Norwegian Cruise Line combined, it has the resources to recover -- but it's probably still a little early for it. Norwegian Cruise Line is building a brand around newer ships, exposing it to higher debt (debt/equity of 119) and negative levered cash flows, with the intention of generating increased revenues down the line.

While Royal Caribbean also carries a high debt/equity ratio in the 90s, a healthy cash flow has so far been able to carry this level of debt burden. Strong investor confidence and customer satisfaction, combined with increased returns through optimization of fleet operations, still offers reason for optimism for a company in a sector that's is in need of some confidence. Therefore, Royal Caribbean probably has enough to give it the edge over Norwegian Cruise Line, and certainly Carnival in its current state.