The Bureau of Labor Statistics released its monthly employment report this morning, and investors have found little to cheer -- the Dow Jones Industrial Average (DJINDICES:^DJI) fell nearly 0.4% in the afternoon after opening with a small pop. The report was rather disappointing -- economists (and this columnist) generally expected a tally of 200,000 new jobs, but were instead served with a preliminary figure of 192,000. That by itself isn't necessarily enough to stoke fear, but there were other worrying trends in today's jobs report, some of which have received far less attention than they deserve. Let's take a look at the guts of the jobs report to find out why Wall Street doesn't think the new numbers are worth getting excited over.

While this latest report fails to push the BLS' data over the peak of 138.365 million nonfarm employees set in January 2008 -- contrary to Wednesday's ADP jobs report, which showed a new record for private-sector employment -- it pushes the economy to striking distance of that total. The current employment tally of 137.928 million Americans is 437,000 employees away from 2008's record jobs total, and a new record should be attainable in the May or June jobs report, barring any unexpected downturn. This month's update continues a general trend that's been quite stable for the last few years -- monthly job gains have quite often been near the 200,000 mark: 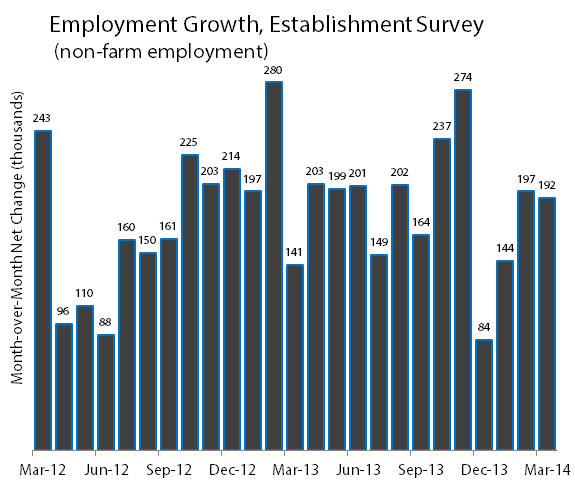 Some parts of the American economy had a larger impact on payroll growth than others. The BLS' sector-by-sector breakdown gives us a rather clear picture of where the jobs are coming from: 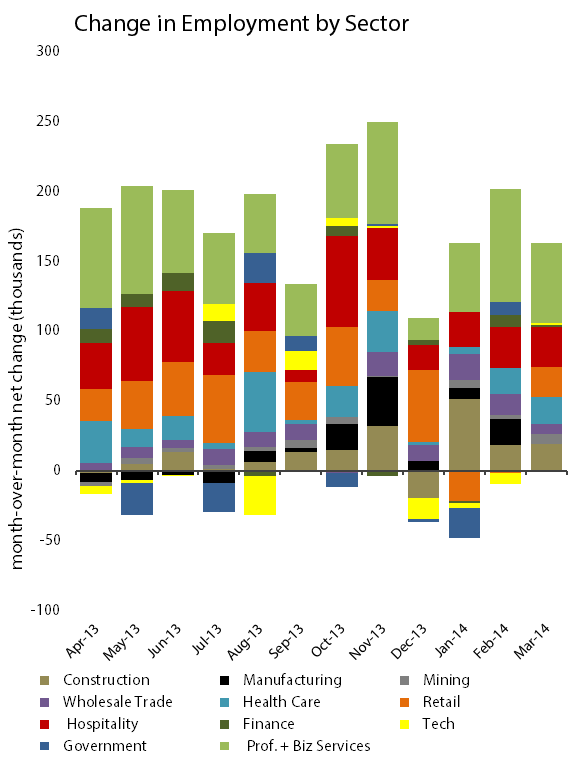 Source: U.S. Bureau of Labor Statistics. Totals may not match due to sector omissions.

Traditionally low-paying sectors -- retail and the leisure and hospitality sector -- continue to drive gains in employment, with the broad-based "professional and business services" sector leading the pack with 57,000 new jobs added in March. Construction employment surged again as the housing crash moves farther in our economic rearview mirror, but the government was a nonfactor this month, which is still better than being a drag on employment (as government layoffs have been an ongoing employment issue). The leading Dow components today reflect the relative strength of their industries: Johnson & Johnson (NYSE:JNJ), which is the dual beneficiary of retail strength and health-care stability, and Coca-Cola (NYSE:KO), the purest play on "consumer discretionary" on the blue-chip index.

Unfortunately, there was some bad news hidden in this month's jobs report. After months of declines in the part-time labor force, the BLS reported a spike of 414,000 new part-time workers in March, which was the largest monthly increase in nearly two years: 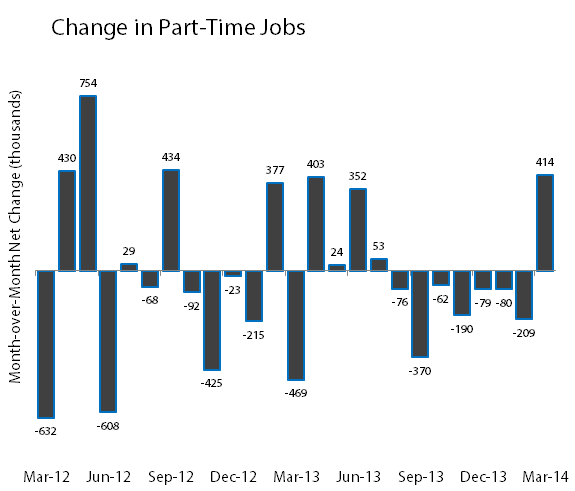 This could just as well be an aberration, as it was a year ago, but the part-time picture in the American workforce is far from rosy. The financial crisis resulted in a spike in the number of part-time workers as a percentage of the labor force, and this has remained elevated ever since. In fact, it might be said that the "part-timing" of American jobs has held back a stronger workforce recovery, as the number of full-time equivalent jobs -- calculated by combining total employment by average hours worked, and then dividing that figure by 40 -- is a bit further away from full recovery than the baseline employment figure: 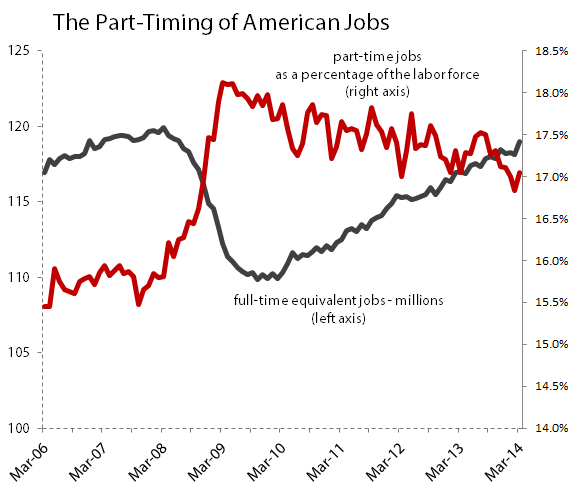 Full-time equivalent jobs peaked in March 2008 at 119.888 million, and the latest figure of 118.963 million full-time equivalent jobs is nearly 1 million short -- more than twice the gap between today's baseline nonfarm employment number and its 2008 all-time high. Average weekly hours, at 34.5 per worker, aren't far off of the 34.7 hours per worker recorded six years ago, but when you add up a fifth of an hour across more than 100 million workers, it makes a very big difference in the amount of time Americans actually spent on the job.

The BLS report also disappointed economists and investors who were hoping for unemployment to decline. Another 27,000 people were added to the unemployment total in March, continuing a reversal of the unemployment declines that had persisted for seven consecutive months until February. The baseline unemployment rate was unchanged at 6.7%, but the U-6 rate (which includes barely there workers and part-time workers who would rather work full time) ticked up to 12.7%. The U-6 rate has remained above 10% since June 2008. Another problem for the American labor force is the declining but still persistently high number of long-term unemployed people: 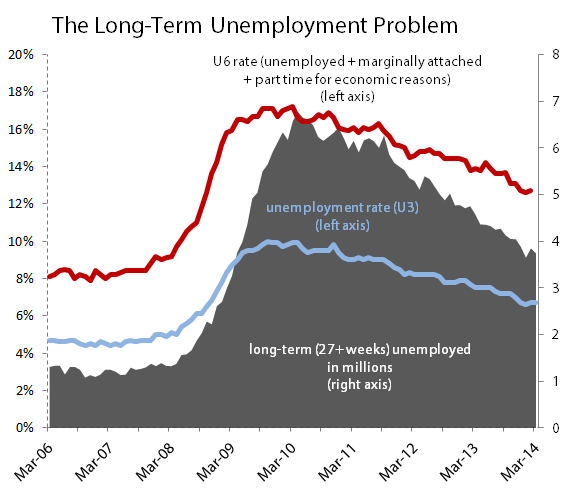 This report wasn't terrible, but it certainly wasn't great. Americans are still working less than they were in 2008. Many of the jobs they're finding don't pay a whole lot of money. And millions of people continue to go many months without ever finding a job. Today's reaction from the market's largest and most durable stocks is about right -- it's disappointing, but not extremely so.