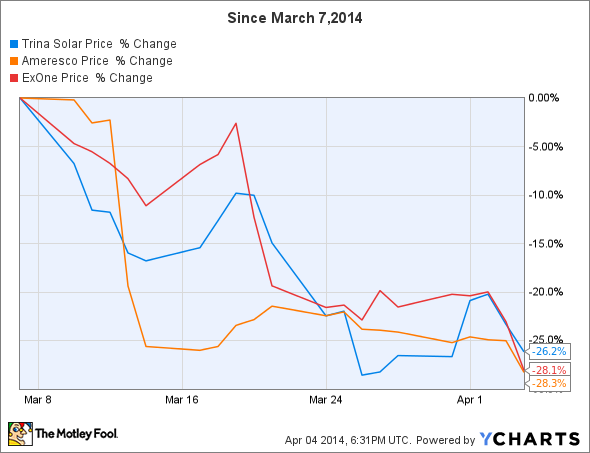 Besides that, all three are also in growth industries, but face very stiff competition. With the market getting jittery and pushing all-time highs, could we see a big market correction send these three stocks even lower? On the other hand, could this be a buying opportunity, to paraphrase Warren Buffett -- a chance to be greedy while others are fearful? Let's take a closer look and see what we can learn.

Failure to execute
Ameresco's business is all about energy efficiency. The company works with governments, schools, and private sector clients like industrial companies to help reduce energy consumption and costs. This involves a lot of things, including renewable energy, but largely what the IEA calls the "hidden fuel" -- energy efficiency. This can include things like windows or updated HVAC systems that increase a building's energy efficiency, but also producing biogas from a landfill (or dairy farm) to generate electricity.

Unfortunately, Ameresco just isn't getting it done. The company largely does business based on its ESPC and PPA contracts, which guarantee cost savings for its clients from day one. The advantage for Ameresco's clients is no large up-front expenses, but still a savings. The problem? The company's backlog has shrunk every year since 2011. After topping at $651 million at the end of 2010, it had fallen to $362 million in December 2013.

Unreasonable expectations?
The term "3-D printing" actually encompasses a number of different things, much in the same way "airplane" can mean anything from a single-engine Cessna to a Boeing 787. ExOne is a specialized player, focusing on industrial printers that use materials like steel and bronze, and can sell for $1 million or more each. The company also makes 3-D printers that use sand to make casting molds, which industrial manufacturers and foundries can use to create castings that might be difficult -- or impossible -- to make with traditional methods. ExOne is adding even more materials to its capabilities in 2014. Source: ExOne

While revenue grew almost 40% in 2013, to $39.5 million, analysts were forecasting even higher growth. Additionally, The company's forecast of $55 million-$60 million in 2014 -- another year of 40%+ growth -- is below the $62 million analysts expected prior to the earnings announcement. Additionally, ExOne sold more than twice as many of its machines in 2013 as 2012 (29 versus 13), and is working to add aluminum and titanium to its repertoire of materials that can be printed with its machines.

Maybe the biggest positive is that the company is investing big to expand its Production Service Center, or PSC, business. Management has told us several times that every single customer who has bought a printer was a PSC customer first. Simply put, expanding the company's capacity and capability to handle outsourced work from customers, ExOne can both grow its business from customers not ready to adopt in-house capability, as well as show potential customers just how much ExOne's technology can help them meet tough design and engineering challenges, leading to increased sales of the company's machines.

Wrong part of the right business
Trina Solar shares have rocketed up since January of 2013, before the recent drop in early March: 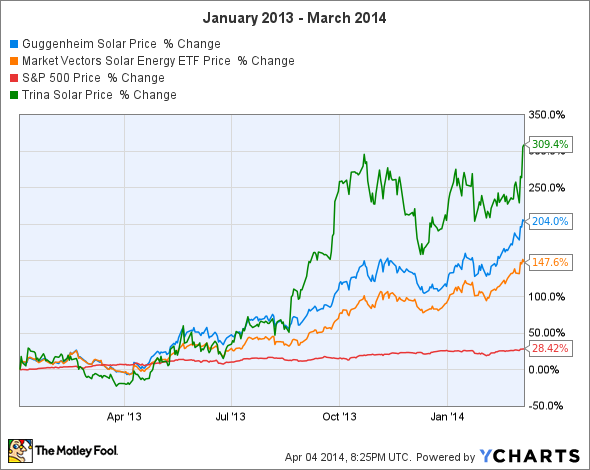 As you can see, Trina shares have outperformed the industry, as measured against solar ETFs Guggenheim Solar (NYSEMKT:TAN) and Market Vectors Solar. However, even as the solar industry has rebounded, it's worth noting that Trina competes in a very hard segment of the solar market, focusing on price-driven, commodity panels. Don't get me wrong: Trina is a well-run company, and its management team is managing the company's capital resources well. The risk with Trina is that it operates in the hardest part of the solar market to live in, competing largely on price, while U.S. panel manufacturers like First Solar and SunPower have advanced technology, and panels that are as much as 30% more efficient than Trina Solar's.

On the positive side, Trina is a major supplier for SolarCity. However, SolarCity has no exclusive ties to Trina, and Trina has really no strong competitive advantages against its peers. As new investment in panel cost and efficiency grows in the coming years, Trina could find itself in an even more competitive environment, squeezing its already thin margins.

Don't buy or sell just because they've fallen: Look at the results
While it's impossible to tell what the market will do during the next year or two -- much less the next few months -- taking a look at how a company's business is trending can inform our decision. What do the trends tell us about these three companies?

Trina is in the worst part of the solar market, and even as solar continues to grow, new technology could make Trina less competitive. Frankly, it's just too hard to predict what will happen to put any faith in Trina as a market beater. Similarly, Ameresco seems like it should be doing great, but until the company can demonstrate growth in its business (and start growing that backlog), it's too early to call this a turnaround play.

ExOne, on the other hand, is positioned as a technical leader in a very critical part of the 3-D market -- advanced materials handling for industrial applications. While ExOne has come up short of analyst projections, it's growing at 40% per year. And today, we can buy shares of this company for about half what they cost this past January. While I wouldn't call a company with a price-to-sales ratio of almost 11 cheap, it does look like the market is giving investors a chance to buy a potentially transformational company at a serious discount.

These 3 Stocks Are Down 25% in a Month: What Should Investors Do? @themotleyfool #stocks $AMRC $XONE $TAN Next Article
Current