Investors have loved specialty coffee stocks lately. Coffee companies such as Dunkin' Brands Group (NASDAQ:DNKN), Starbucks (NASDAQ:SBUX), and Keurig Green Mountain (NASDAQ:GMCR.DL) have soared past the market over the last year and they have developed fairly lofty valuations. Dunkin' sports a price to earnings ratio of nearly 37, Starbucks' P/E ratio comes in at 30.8, and lastly, Keurig Green Mountain has a P/E ratio of 31.3. All are well above the market's average P/E of approximately 18. 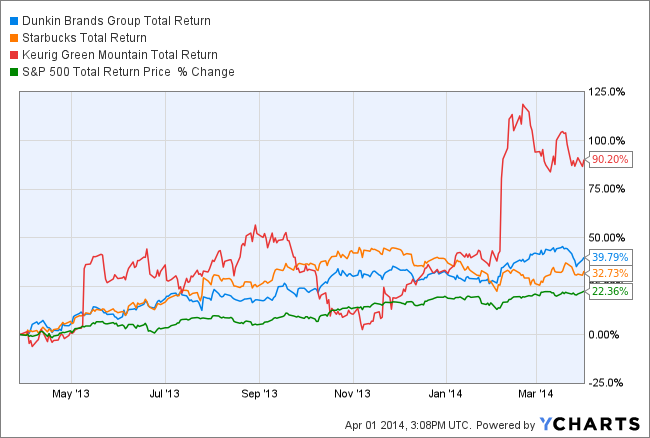 Interestingly, all three of these companies have very different business models. Keurig Green Mountain sells specialty coffee and other beverages that come in pre-portioned packages which fit its single-serve coffeemakers. It sells its coffee primarily through partner retailers such as supermarkets and also sells directly to consumers via its website.

Dunkin' Brands also sells specialty coffee and ice cream in coffee shops around the world. However, nearly 100% of Dunkin's shops are franchised as the company operates only 36 of the over 10,100 Dunkin' Donuts and Baskin-Robbins restaurants in the United States and none of the 8,000 international locations.

Prior to allowing a franchisee to open a restaurant under the Dunkin' Donuts or Baskin-Robbins brand names, Dunkin' Brands vets potential franchisees for food-service experience, general business experience, and capital requirements. This general background check, as simple as it may seem, can help the company choose franchisees that will help its business succeed and look good in the eyes of consumers.

A franchisee also pays a fee of approximately 5% on top of the royalty fee, and this goes into an advertising fund which Dunkin' Brands manages. At least 80% of this money funds all of the company's expenses for marketing, research and development, product innovation, public relations, et cetera. The company cannot use more than 20% of this fee for its administrative costs.

What's to love about Dunkin's model?
As the company's primary revenue driver is a percentage of sales and not a percentage of income from franchisees, Dunkin' has protection from operating inefficiencies. This could include employee turnover costs, costs associated with wasted product, or any other front-line blunders.

However, as the company earns a percentage of sales an overall downturn in consumer traffic to stores would affect Dunkin'. This could be due to an economic slowdown or failed marketing efforts.

As stated earlier, Dunkin' earns a significant portion of its revenue, 13.5% in 2013, from leasing and subleasing properties to franchisees. As long as the individual franchisees can stay in business this revenue will remain fairly stable, and the company has already vetted franchisees to reduce the likelihood of them having to close shop. This revenue source would stay relatively steady during periods with volatile franchise royalties.

Also in the event of a downturn in the United States, geographic diversity would dampen its effects on Dunkin'. The company franchises over 3,100 Dunkin' Donuts locations and 4,800 Baskin-Robbins locations internationally. The international segment represented 20% of the company's total revenue in 2013.

From an advertising standpoint, collecting fees from franchisees and handling all advertising and public relations on the corporate level will streamline efforts and ensure comparability on the store level. Having advertising professionals rather than store owners run promotions lowers the likelihood of a blunder at the store level adversely affecting consumers.

Fool's take
The bottom line here is that as with Keurig and Starbucks, Dunkin's business model allows the company and its investors to prosper with the growth of the specialty coffee industry. Yet it may be a little better protected in the long run from an overall economic downturn. I believe you can expect to see more steady and reliable results from this company year in and year out than you will see from the other two specialty coffee companies.