Sears Holdings (OTC:SHLDQ) has done it again. In an effort to "focus on core operations," Sears has spun off yet another subsidiary with the spinoff of Lands' End (NASDAQ:LE) at the beginning of the week. This is not the first (or likely last) Sears spinoff; Sears Canada and Sears Hometown and Outlet Stores (NASDAQ:SHOS) have both been spun off from the struggling retailer. Now that Lands' End is a stand-alone company, is it a good investment? Looking at Sears' track record of spinoffs and taking a dive into the valuation of Lands' End provides several interesting insights.

Sears spinoffs have a shaky history
While many spin-offs are intended to unlock value for shareholders, Sears' track record has been to the contrary. Since the spinoff of Sears Hometown and Outlet Stores in 2012, both companies have declined in value and trailed the market significantly: 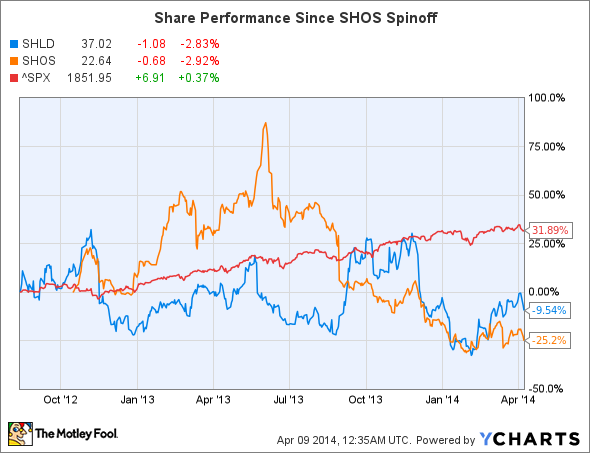 The performance of Sears and Sears Canada over the past five years has underperformed the market by an even wider margin: 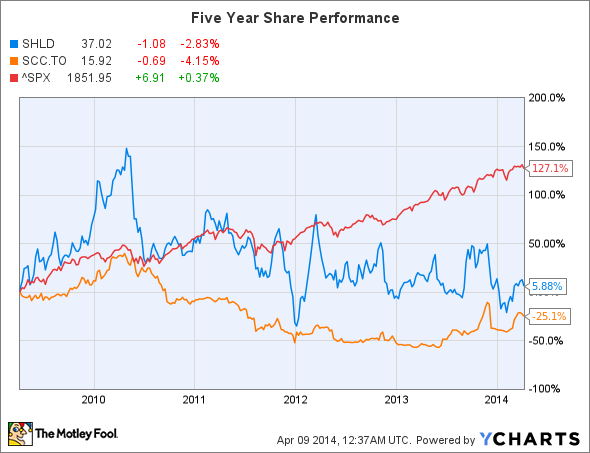 Shares of Sears Canada are roughly flat over the more than ten years that the company has been independent from Sears; meanwhile, the S&P 500 has more than doubled in value. With this questionable history of spinoffs, it is important to take a careful look at Lands' End before assuming the stand-alone company will unlock value.

A look at the valuation of Lands' End
Following Tuesday's closing price of $27.34, Lands' End has a market capitalization of $874 million. This puts the company at a very reasonable valuation based on several metrics:

Compared to a peer in the apparel industry like The Gap (NYSE:GPS), Lands' End appears to be trading at quite a cheap valuation based on each of the metrics above. However, it is important to note several factors that may change this opinion. First, Lands' End has reported declining revenue and slowly shrinking store counts over the past couple of years. In contrast, most successful retailers like Gap have managed at least modest revenue and location growth over the same period.

Additionally, Lands' End continues to be reliant on Sears. In the information statement filed with the SEC in conjunction with the spinoff, Lands' End acknowledged the following:

"The success of our Retail segment depends on the performance of our "store within a store" business model; if Sears Roebuck sells or disposes of its retail stores or if its retail business does not attract customers or does not adequately promote the Lands' End Shops at Sears, our business and results of operations could be adversely affected."

With 273 "store within a store" locations in Sears at the end of 2013, the success of Lands' End is still partially correlated to the success of Sears' ongoing turnaround efforts.

In addition to the ongoing reliance on revenue from Sears, Lands' End will also be feeling the effects of its relationship with Sears well into the future thanks to $515 million in debt issued to pay a dividend to Sears prior to the spinoff. While the company's strong free cash flow can support this debt level, it is important to note that over a third of Lands' End enterprise value will be in the form of long-term debt for the foreseeable future. This debt will limit flexibility for future acquisitions and investment in growth opportunities.

Evaluating Lands' End as an investment
While trailing valuation metrics appear quite reasonable, Lands' End does not show any obvious catalysts for growth. In the most recent year, Lands' End revenue declined thanks to a net decline in locations and a 7% decline in same store sales. These results are just the most recent installment in a story that began with Sears' purchase of Lands' End for $1.9 billion in 2002 and ends with a decline in Lands' Ends' market capitalization over the past 12 years to just $874 million today.

A declining sales trend with no clear turnaround strategy and the burden of $515 million in new debt are hard to overlook for potential investors.  This limited upside potential is at the center of the market punishing shares of Lands' End by over 20% since the spinoff. Quite simply, the market isn't interested in placing any premium on a solid cash generating business unless there is confidence that the business has the opportunity to grow in the future. Without a clear path to growth, it is easy to foresee a scenario where Lands' End follows in the footsteps of previous Sears spinoffs with a future of mediocre returns.