Bring back the what?!

On March 31, we discussed the disappointing trend of both new-home and existing-home sales in conjunction with mortgage rates. Sales of both are either declining or stagnant despite historically low mortgage rates.

With mortgage rates so low, what's holding back housing? What's preventing more Americans from buying homes? While we conceded that there are several reasons, we also speculated that despite whatever reason, it may be time to give the market a bit of a jolt.

Bring back the homebuyer tax credit
This isn't the first time HSH.com has proposed bringing back the homebuyer tax credit in a different form in an effort to boost home sales. Back on September 24, 2010, in the wake of dismal home sales following the expiration of the tax credit, we proposed reviving it in a different form so to not produce a mad dash of sales near the expiration deadlines.

Here are two graphs which show the effect the tax credit had on new and existing sales: 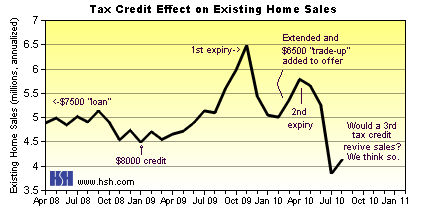 Time for something different
"It's hard to say what might help kick-start the market, but it may be time to start considering options, especially since the Realtors reported [recently] that pending sales of existing homes are still sliding," said Gumbinger.

Here are a few ideas for how we could revamp the homebuyer tax credit:

Another federal homebuyer tax credit might be a solution that's ignored for the rest of time given its past downfalls (prisoners and deceased claiming the credit, the market distortion, improper filing), but Gumbinger is right, if home sales continue to decline and lending standards don't budge, it's time to once again think outside the box in order to help real estate turn the wheels of our economy.

The original article: Is it time to bring back the homebuyer tax credit? appeared on HSH.com.

Additional mortgage articles can be found on HSH.com.

10 ways to get the best mortgage rates

How much of your mortgage payment goes toward principal and interest?

Is It Time to Bring Back the Homebuyer Tax Credit? @themotleyfool #stocks Next Article
Current