Google (NASDAQ:GOOG)(NASDAQ:GOOGL) Android changed how manufacturers thought about operating systems. Google allowed manufacturers to change, customize, and fork the open source OS to their liking -- adding or throwing out features as needed. That flexibility made Google Android the most popular mobile operating system in the world, with a 78% market share in smartphones and a 62% share in tablets.

Google now wants to apply its Android strategy to hardware with Project Ara -- an infinitely customizable smartphone composed of tile-shaped modules. The base unit, known as the "Gray" phone, will reportedly only cost $50. It's a spartan frame unit that consists of a frame, screen, and a Wi-Fi module -- a camera, speakers, motion sensors, and other frills are not included.

Users can buy additional modules to add the features they want to the back of the phone. For example, a user who likes photography can plug in a nicer camera, while a gamer can plug in a faster processor and motion sensors. A user who needs a phone to last longer between charges could swap out the rear camera for a second battery.

The cost, features, and ultimate price would be entirely decided by the customer. These modules will initially be produced by a new generation of 3D printers from 3D Systems (NYSE:DDD), and customers can fully customize the module designs.

That opens up a world of possibilities for manufacturers, which can produce a wide array of attachments for the device, such as personal health monitors or credit card readers. However, the phone won't be available in the U.S. for some time -- Google plans to launch it in developing markets first to customers who can't afford a smartphone.

Why Project Ara could be a game-changer
Project Ara could be the most revolutionary leap forward since Apple's (NASDAQ:AAPL) iPhone, which is ironic since it hearkens back to the earlier days of desktop PCs, when hobbyists assembled their own dream machines from individually purchased components. The key difference, however, is that Project Ara simplifies the process into a matter of plugging in labeled blocks.

This is not the first time Google has simplified difficult concepts into block-like figures. In 2010, Google released App Inventor for Android, which helped developers with limited programming experience to create their own apps through a visual drag-and-drop block editing interface. Simplifying programming into blocks likely contributed to the meteoric growth of the Google Play Store, which now has over a million apps. 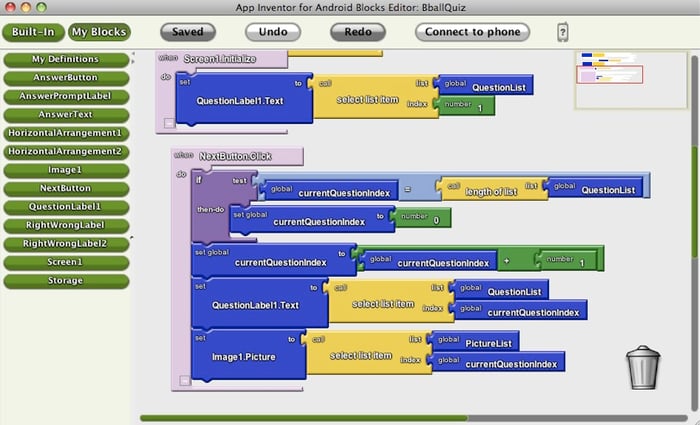 Google understands that while people love to customize their mobile devices, the idea of putting together hardware and writing code intimidates them.

By turning the back of the Gray Phone into a blank canvas to customize, Google could launch a new market similar to Apple's accessories industry, which rode high on the coattails of Apple's success with protective covers and cases.

Smartphone manufacturers like Sony and HTC -- which release too many versions of the same phone (Xperia and One) with slightly different specifications -- could benefit greatly from releasing base devices like the Gray Phone, then selling proprietary add-on modules individually.

Why Project Ara might fail
Yet as exciting as Project Ara sounds, there's one serious flaw in Google's strategy.

Nokia (NYSE:NOK), which is still the second largest handset maker in the world after Samsung, is a dominant force in developing and emerging markets. Nokia's Asha, a low-end smartphone equipped with a touch screen, camera, speakers, motion sensors, Wi-Fi, and 3G connectivity, only costs $40 to $99. Nokia also released the low-end Nokia X Android phone for $140 in India last month.

When compared to the Asha, Google's $50 price point for the Gray Phone loses its appeal. By pulling apart the components, Google might have inadvertently raised the price of the finished product.

For example, the hobbyist who assembled a desktop computer out of custom parts for $500 won't be happy when he realizes that a comparable Hewlett-Packard PC only costs $250 at Best Buy. The simple reason is that big companies purchase parts in bulk at steep discounts. Moreover, it generally costs less to integrate multiple components -- such as the camera, sensors, and speakers -- onto a single board rather than manufacture them separately.

Therefore, the Gray Phone might not be a great deal for customers in developing and emerging markets, although I still think it could be a very popular and fun choice in developed ones.

The bottom line
Google intends to launch the Gray Phone in January 2015. The smartphone market moves very quickly, so it will be interesting to see if the revolutionary modular phone can make a splash in the maturing, fragmented market. If it succeeds, I wouldn't be surprised to see the idea of modular computing catch on in tablets, laptops, and hybrids as well.